Pak: Poor tribes at the mercy of ruthless Taliban 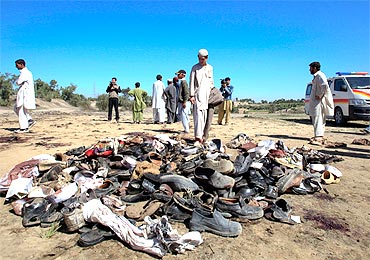 Image: The site of a suicide bomb attack at a funeral on the outskirts of Peshawar
Photographs: Fayaz Aziz/Reuters Tahir Ali

The impoverished tribesmen in Pakistan's lawless areas have borne the brunt of the government's attempts to combat militancy, says Tahir Ali

The Pakistan government, which receives massive monetary assistance from the United States, has repeatedly launched military operations in its tribal areas to flush out Taliban militants. The government has also formed Lashkars (militia forces comprising local tribesmen) and provided them with arms to fight Taliban militants.

Retaliating violently against these militiamen, Taliban militants have attacked their public gatherings like jirgas (meeting of tribal elders), marriages and funerals.

In the wake of such terror strikes, all the government does is issue a statement condemning the attack, declaring 'no one would be allowed to disturb peace in these areas'.

While targeting a public gathering, the ruthless Taliban militants don't even care about the lives of the women and children present at the venue.

'Government has left us in the lurch' 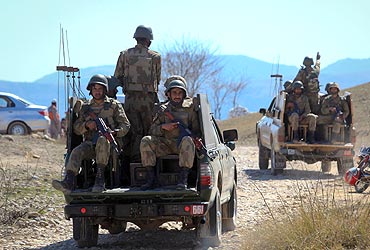 Image: Soldiers patrol as they secure the area near the site of a suicide bomb attack at a funeral on the outskirts of Peshawar
Photographs: Fayaz Aziz/Reuters

On Wednesday, a funeral procession for the wife of an anti-Taliban elder was targeted at Adezai area near Peshawar. According to media reports, 34 people were killed in the attack and hundreds of others injured, including many children.

Zahir Shah, a Lashkar member in Adezai, says, "Initially, we were encouraged by the government and we succeeded in keeping militants out of our area. But the lack of support by security forces left us in the lurch and we were attacked repeatedly by the Taliban." 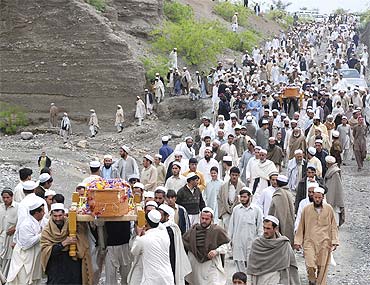 In December 2010, 43 people were killed and more than 100 sustained injuries when a gathering of the pro-government Salarzai tribe was attacked by a woman suicide bomber in Bajuar agency.

The TTP claimed responsibility for the attack, saying, "The Salarzai tribe was the target of the suicide bomber as the tribe has sided with the government and raised an armed Lashkar against the Taliban in the area."

In the same month, 50 people were killed and 120 others injured in twin suicide bomb attacks when the TTP targeted a general meeting of an anti-Taliban peace committee in Mehmand Agency. The committee was reviewing the law and order situation in the area; the meeting was held at the agency headquarters but the government failed to provide security to tribal elders. 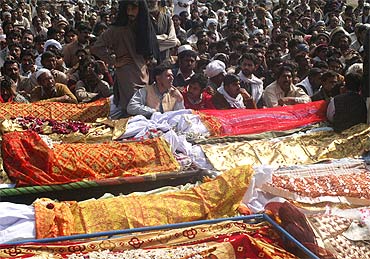 In January 2010, a suicide bomber targeted a group of men playing volleyball in Lakki Marwat area of Khyber Pakhtunkhwa Province, killing 75 people and injuring 60 others. The men belonged to the Shah Hassan Khel tribe which had supported the government's attempts to oust militants from their area.

In spite of receiving threats from Taliban militants, the government did not take any measures to protect these villagers.

The impoverished tribesmen in Pakistan's lawless areas have borne the brunt of the government's attempts to combat militancy. The militants attack not only the militia men but their entire village, including women and children, but the government never comes to their rescue.