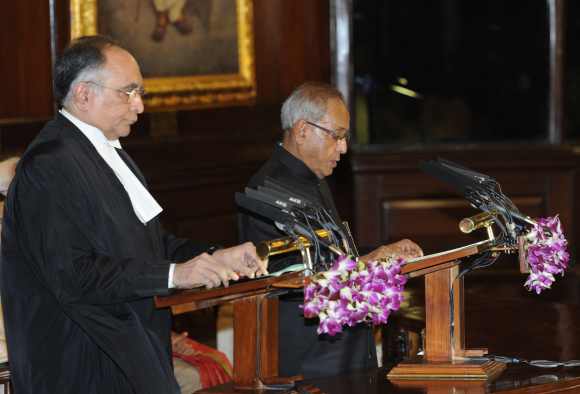 Pranab Mukherjee on Wednesday became the 13th President of India capping a five-decade career that saw him play significant roles in government, Parliament and party.

The 76-year-old Mukherjee was administered the oath of office to "preserve, protect and defend the constitution and law" by Chief Justice of India Sarosh Homi Kapadia at an impressive ceremony in the historic Central Hall of Parliament.

The veteran leader took the oath in English in the name of God to a thunderous applause and thumping of desks by those in the packed Central Hall that included Vice President Hamid Ansari, Speaker Meira Kumar, Prime Minister Manmohan Singh and outgoing President Pratibha Patil.

Just after he took oath, he was offered a 21-gun salute marking the assumption of office of the highest constitutional post in the country. 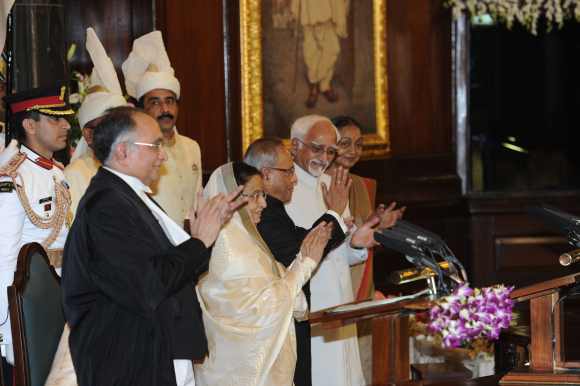 In his brief acceptance address, he said the principal responsibility of this office is to function as the guardian of the Constitution.

"I will strive to preserve, protect and defend the Constitution not just in words but in spirit," Mukherjee said.

He also said word poverty should be eliminated from the dictionary of modern India but felt the tickle-down theory would not work. He said hunger is a humiliation for the mankind.

Referring to the change of equations post Cold War, he said the world was in the midst of fourth world war fighting terror of which India had the early experience.

Mukherjee ended his speech saying, "There can be no greater reward for a public servant than becoming the First Citizen of the country."

Before the function in Parliament, the outgoing President and the President-elect, wearing a black achkan, churidar (long coat, pyjama), drove a small distance in the bullet-proof presidential limousine from the North Court to the forecourt of Rashtrapati Bhavan.

Patil received the last guard of honour from the horse mounted Presidential Body Guards and then the two drove down the Raisina Hill to nearby Parliament House in a procession accompanied by the PBG.

At Parliament House, they were received by the vice president, Lok Sabha speaker and the CJI. A guard of honour was presented after which they were ushered in to the Central Hall.

At the Central Hall, Home Secretary RK Singh read out the Election Commission notification announcing the election of Mukherjee to the highest Constitutional office. 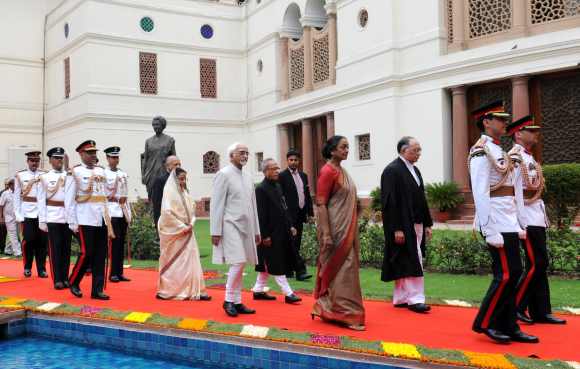 Image: Pratibha Patil, Mukherjee, Ansari and Kapadia in a ceremonial procession at Parliament House for the swearing-in
Photographs: PIB

Once the oath-taking was over, Mukherjee and Patil exchanged seats on the dais in the Central Hall after which the new President made his speech.

After the function was over, Mukherjee and Patil were escorted out in a procession and the new President was again given a guard of honour by the PBG.

As Mukherjee walked through the aisle in the Central Hall, he received greetings all along from those assembled. He shook hands with the prime minister and towards the tail-end of the Hall smiles were exchanged between him and West Bengal Chief Minister Mamata Banerjee.

Mukherjee and Patil then again went in a ceremonial procession to the Rashtrapati Bhavan for another round of guard of honour. He later escorted the outgoing President to 2, Tughlak Lane, her temporary home till she moves to her residence in Pune.

Tags: PHOTO , MORE , TOP
© Copyright 2022 PTI. All rights reserved. Republication or redistribution of PTI content, including by framing or similar means, is expressly prohibited without the prior written consent.
Print this
article