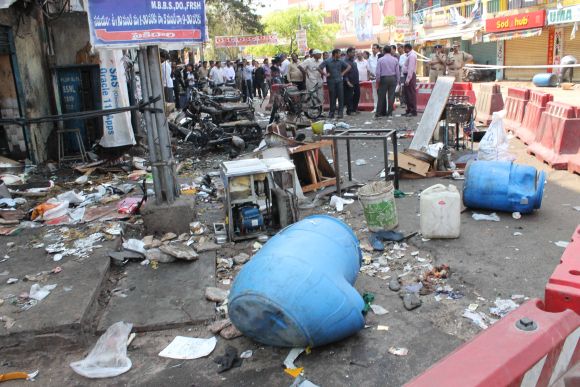 Image: The site of the twin blasts at Dilsukhnagar in Hyderabad, a day after
Photographs: SnapsIndia

Banned militant outfit Indian Mujahideen's name has cropped up in the preliminary investigation into the twin blasts in Hyderabad in which the toll climbed to 16 on Friday.

The probe suggested that improvised explosive device was used to carry out the explosions and the modus operandi was similar to blasts triggered by Indian Mujahideen in the past.

Delhi Police, along with Hyderabad Police, is expected to interrogate an alleged Indian Mujahideen terrorist, arrested by special cell of the Delhi Police from a place in Hyderabad last October.

Maqbool, who is currently in Tihar jail, had said the outfit was planning terror strikes in some places in Hyderabad for which recce had been carried out.

The death toll in the twin blasts, meanwhile, mounted to 16 with two more persons succumbing to injuries. 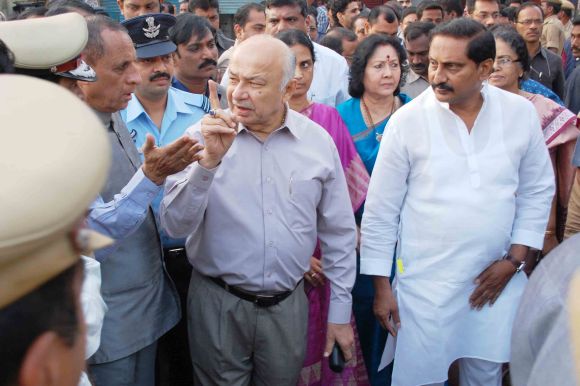 "Till now, out of 14 bodies, 12 have been handed over to their kin. Two more bodies are in the mortuary. One has to be identified. 14 bodies have directly been sent to Osmania Hospital. Two more are awaited from private hospitals," a senior doctor at the state-run Osmania General Hospital said.

As many as 119 people sustained injuries in the twin blasts Thursday evening, police said.

Union Home Minister Sushil Kumar Shinde, who visited the site of the blast and also the injured in hospital, said there was no specific alert about the blasts and only a general alert was issued to the states.

Asked about reports that suggested the involvement of terror group Indian Mujahideen, he said nothing can be said about it at the moment.

Terror struck Hyderabad on Wednesday when two powerful near simultaneous blasts ripped through a crowded area close to a cluster of bus stands in Dilsukhnagar area. 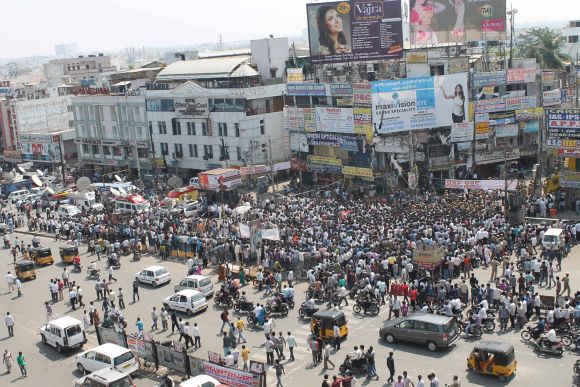 Image: A huge crowd has gathered at the blast site in Hyderabad on Friday
Photographs: SnapsIndia

The blasts triggered by IEDs tied to two bicycles took place at two sites 100 metres apart outside a roadside eatery near Konark and Venkatadiri theatres in the area located on the Hyderabad-Vijaywada National Highway.

The Saroor Nagar police has registered a case, based on a complaint by an eye-witness Gadagolla Anand, under different sections of IPC and Sections 3 and 5 of the Explosive Substances Act as well as Sections 16, 17 and 18 of Unlawful Activities (Prevention) Act.

A senior police official said two CCTV cameras were installed on traffic posts at Dilsukhnagar bus stand. However, it was found that one was not functioning. 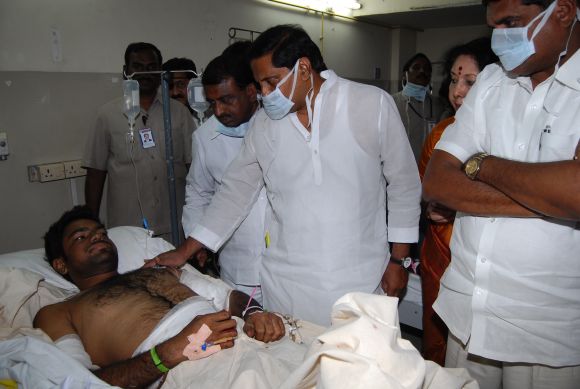 Image: CM Kiran Kumar Reddy speaking to the injured victims of the twin blasts at a Hyderabad hospital on Friday
Photographs: SnapsIndia

When asked about the possibility of capturing blast images by the camera, he said it may not be possible as they were focused towards the traffic.

He, however, said they are in the process of going through the footage.

An inspector general of police, who was at the scene last night, told PTI, "The crime scene was largely disturbed as large number of people moved freely even before we could totally sanitise the two spots.A lot of evidence virtually got trampled due to movement of VIPs, including the chief minister, large number of media personnel and curious onlookers.

"But still we could gather some material that could help us in the probe," he said.

"It was a high-grade explosion but the quantity of explosive used was low as it was an IED. There was no conclusion yet about the type of explosive used in the blasts. There are still many loose ends in the case which we are trying to tie up. We are examining video footage recorded on closed-circuit cameras, installed at the Dilsukhnagar bus stand junction (Rajiv Chowk) and also at one of the bus shelters in the vicinity," he said. 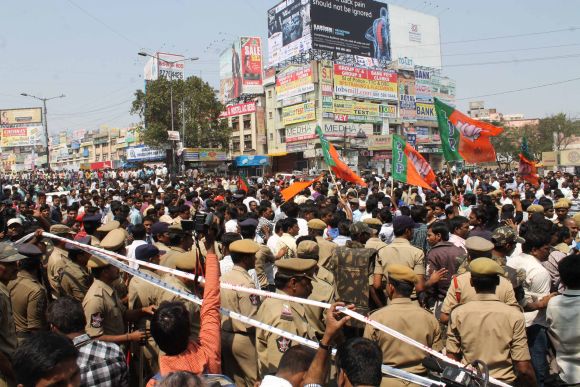 Image: A huge gathering of people, including political workers, seen at the twin blasts site in Hyderabad on Friday
Photographs: SnapsIndia

According to forensic experts, there is a resemblance in the nature of injuries sustained by the victims in the twin blasts that rattled Hyderabad now and the 2007 terror blasts.

The autopsy showed that the impact of the explosion was felt more in 2007 than it is now though the victims had similar injuries, the experts, involved in both the investigations, said.

"There are iron particles found inside the bodies of the victims. We found nuts, bolts, nails, pieces of glass then and also now," the expert told PTI.

A senior doctor at the state-run Osmania General Hospital said that the toll has gone upto 16 and the number of injured to about 120.

Heart-rending scenes were witnessed at the hospital, where the bodies have been kept, with wailing relatives collecting the bodies of their family members.

Meanwhile, it has come to light now that Hyderabad city Police Commissioner Anurag Sharma has offered prayers at the Sai Baba temple in Dilshuknagar area minutes before the blast took place.

Tags:
More
© Copyright 2023 PTI. All rights reserved. Republication or redistribution of PTI content, including by framing or similar means, is expressly prohibited without the prior written consent.
Print this
article
ALSO
READ