Sign in  |  Create a Rediffmail account
Rediff.com  » News » Now, Pak will face the heat from both US and Al Qaeda

Now, Pak will face the heat from both US and Al Qaeda 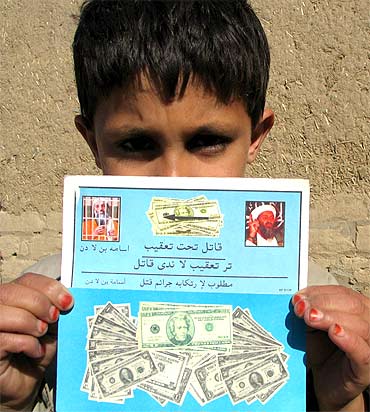 Now that it has been revealed that Osama was hiding in Pakistan, the presence of other key Taliban and Al Qaeda operatives in the restive nation doesn't seem such a far-fetched possibility, says Tahir Ali

Al Qaeda founder and chief Osama bin Laden has been killed in Abbottabad, Pakistan, during an operation conducted by the Central Intelligence Agency on Monday morning.

It is a setback for the Al Qaeda as bin Laden was a role model and a source of inspiration for the international terrorist organisation. The killing might be a big achievement for America but the incident has put the Pakistan government, which will have to explain what Laden was doing there, under pressure.

The incident proves that Pakistan is indeed the 'hub' of the Al Qaeda and other terrorist organisations. After this incident, the international community is likely to pressurise Pakistan to do more to help arrest other leaders of the Al Qaeda and Taliban hiding in that country.

bin Laden was killed during a CIA operation, along with other members of his family, in a compound in Abbottabad, a city located in Khyber Pakhtunkhwa region that is hardly 150 km from the capital Islamabad. Finally, the US has hunted down its most wanted target after searching for him for nearly 10 years.

Did Pakistan help in the operation? 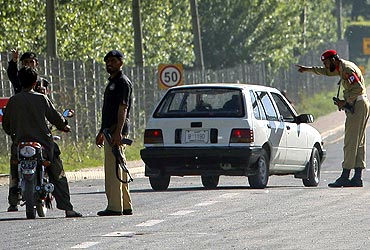 bin Laden was living in a secure compound in Abbottabad which, according to the neighbours, was built nearly eight years ago. It was so heavily guarded that no one was allowed to even go near it.

Ironically, the compound is located close to the Pakistan Military Academy. This raises questions about how the world's most wanted terrorist could live there and not be noticed by the army.

According to US authorities, the operation was carried out by the CIA and so far there has been no confirmation of the involvement of Pakistan.

So far, no Pakistani official has verified the news of Osama's death -- the silence by the nation's government points towards the sensitive aspect of the story. 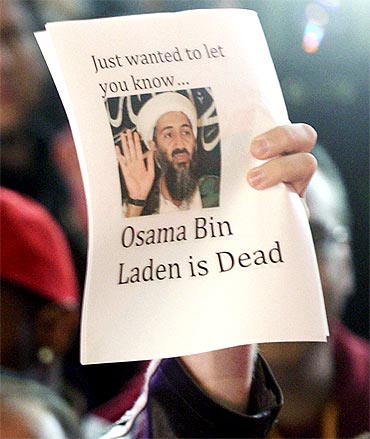 Talking to Rediff.com, Rahimullah Yousafzai, an expert on Al Qaeda and Taliban affairs, said, "It is big news that Osama has been killed but it is a bigger news that he was hiding inside Pakistan and was killed in Abbottabad."

It is surprising that Osama was killed in Abbottabad; it was considered a relatively safe place, unaffected by the large-scale activities of the Taliban.

But according to Rahimullah, the Al Qaeda leaders prefer to hide in cities instead of tribal areas, as the chances of being arrested or killed are lesser. It is more dangerous for them to hide in tribal areas as drone attacks and military operations are common there.

"The killing of Osama would no doubt affect the terror outfit's network, but the Al Qaeda was already weak there, especially after the fall of the Taliban in 2001. According to the US, the number of Al Qaeda members inside Afghanistan is 50, while nearly 300 members of the network are hiding in Pakistan. During the last few years, the Al Qaeda has tried to carry out attacks inside America, but it doesn't have the capability to do so," says Rahimullah. 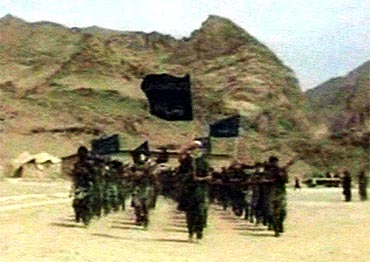 Image: Recruits of Osama bin Laden are seen marching in this frame grab from an undated training video at an undisclosed location in Afghanistan
Photographs: Reuters

Osama's killing can affect the network but it may not be able to dent the ideology these terrorists have been following.

The Al Qaeda has many units across the world, all of which carry out their activities independently. These outfits affiliated to the Al Qaeda share the same ideology but little else, hence Osama's killing will not influence their activities directly.

Pakistan has already faced flak over the fact that Al Qaeda leaders and key Taliban operatives like Mullah Omar are hiding there.

Some time ago, reports claimed that Mullah Omar had received treatment at a hospital in Karachi. But the Pakistan government had rejected these claims, stating they were part of an anti-Pakistan propaganda.

But now that it has been revealed that Osama was hiding in Pakistan, Mullah Omar's presence in the nation doesn't seem such a far-fetched possibility.

'Pakistan will face pressure from all sides' 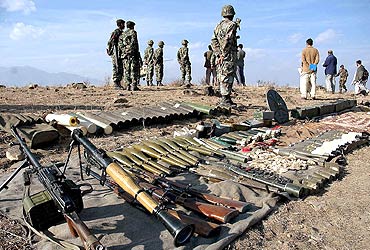 At the same time, Pakistan is under pressure from the world community to take action against the Haqqani network and other 'good Taliban' factions which are active in the tribal area, especially in North Waziristan.

After Osama's killing, Pakistan would be in no position to turn down this demand anymore.

Talking to Rediff.com, Pakistani defence analyst Dr Ayesha Siddiqua, said, "Now Pakistan will face pressure from all sides, as the Al Qaeda chief has been killed at a place that is located near the Kakol military academy."

She added, "So far, no plan is under consideration to take on terrorist organisations in North Waziristan, but the pressure would mount on Pakistan in the coming days. Pakistan believes that the Haqqani network is crucial to secure its interests in Afghanistan so they are reluctant to take any action against them, but now the scenario has changed." 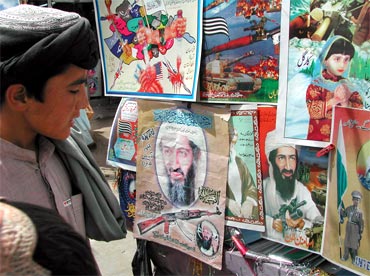 According to analyst Hasan Askari, Pakistan would have to bear the brunt of the reactions from both the Al Qaeda and the US.

"The affiliated terror groups, from the Taliban to the Al Qaeda, would target Pakistani installations as they would blame Pakistani agencies for the killing. In the days ahead, one can expect bomb blasts and suicide attacks in different parts of the country, so Pakistani security forces should be fully prepared for this reaction," he said.

How the US will handle Pakistan now depends on whether the CIA single-handedly carried out the operations against Laden or if it was helped by the Inter Services Intelligence.

"An official statement from the Pakistan government should clear the situation," Askari added.