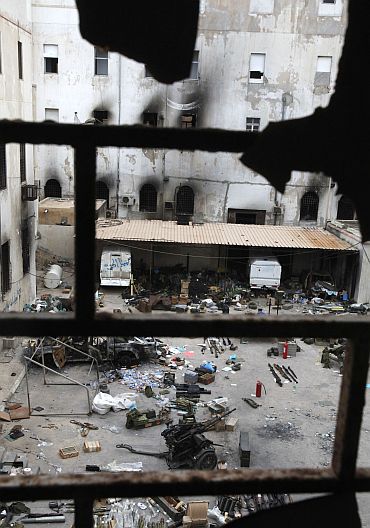 Image: A state security building taken over by anti-government protesters is seen in Benghazi city, Libya

Scenes of human misery and horror in strife-torn Libya have come to light as a band of migrant plumbers from this coastal district of Orissa returned to their village to recount their harrowing ordeal. Kendrapara, known for its human resources, has seen its skilled population, including plumbers, migrating to the Middle-East over the years to eke out a better living. 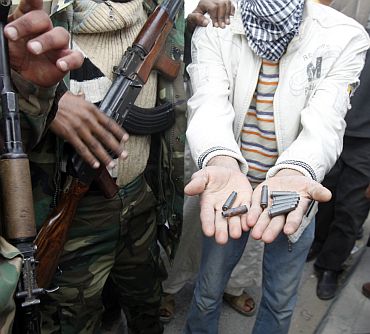 Image: A protester shows spent ammunition casing, which he says are from bullets fired by pro-government soldiers in the past few days
Photographs: Asmaa Waguih/Reuters

Six plumbers who returned safely to their families said on Tuesday that it was a providential escape from a virtual death-trap. "It was a sort of lucky escape from the claws of death. I am fortunate in the sense that I lived in Tripoli. That's why I could come back with my friend Saroj. Things are precarious everywhere," said 25-year-old Somanath Bhuyan, a plumber from Diyanpatana village in Pattamundai area.

"There is no safety of life and property in Libya. But things are somewhat better in Tripoli, where the Gadaffi regime holds grip over anti-government uprisings," Bhuyan said.

Saroj Khuntia of Nimapur village, who also fled from that country, agrees, "Since February 17, we were holed up in the quarters given to us by the company. We stopped venturing outdoors. After daybreak, gun shots terrified us everyday. The employers were giving us two meals every day. As rations thinned out, the food quantity dropped. It was chaos everywhere. We could hear people screaming and crying for help behind our closed doors," Saroj said. 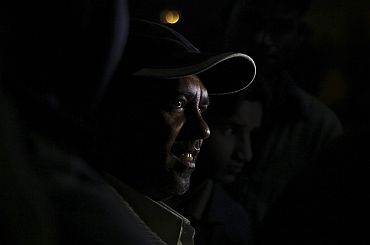 "We, a group of 50 Indian workers went in a van to the airport with an armed escort. It was a 24-hour wait at the airport before we were airlifted on March 3 to New Delhi. More than two dozen workers from Kendrapara district are still stranded there. All of them are plumbers based in Libya's eastern and western parts," Saroj added.

"One of them, Rama Chandra Das from Chandiagadi village of Rajnagar tehsil, had talked to me over phone. The telephone network was poor. He and five others from Rajnagar are locked in no-man's land of Zawiya," another resident of Nimapur said.

Despite the horrendous experience, the plumbers still think of moving back once order is restored. "We are left with little option but to move back to our workplace. I was getting a monthly salary of Rs 17,000. I worked as a plumber in a posh residential colony project near Tripoli. The monthly remuneration package is too tempting to reject," Saroj observed.

"During my 13-month stay, I have found Tripoli to be a nice and hospitable place. I got my salary on time. We were provided free food and accommodation. In about a year-long employment, I had saved over Rs 1.5 lakh and sent it to my parents through wire transfer," Saroj said. "It was under extraordinary circumstances that we were forced to leave. Our employers have asked us to be back after things get better. There was peace and order in Libya before the outbreak of civil war," he said.

'The number could be higher' 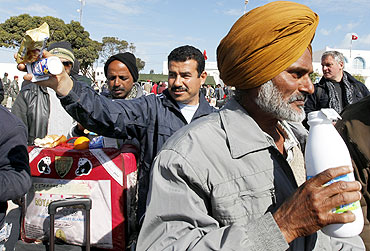 Poverty now stalks the family of the plumbers from Nimapur village. After Saroj's Libyan employment, the four-member family was leading a decent life. "My father cultivates one acre of land to support us. I have a college-going younger brother and sister. My income came in handy for all of us. I have to go back," Saroj said.

"We do not have exact figures of number of people from Kendrapara who were employed there. From the information gathered so far, around 50 to 60 plumbers and electricians were there before the situation got out of hand. But we believe the number of migrants would be on a higher scale," said district labour officer, Pradipta Kishore Mohanty.

The crux of the problem is that these migrant workers do not come under Inter-state Migrant Workmen Act, 1979. "We have no administrative control over such things. The immigration wing of the external affairs ministry deals with this," Mohanty said.