Sign in  |  Create a Rediffmail account
Rediff.com  » News » 'Netaji had a romantic, deeply emotional side to him'

'Netaji had a romantic, deeply emotional side to him' 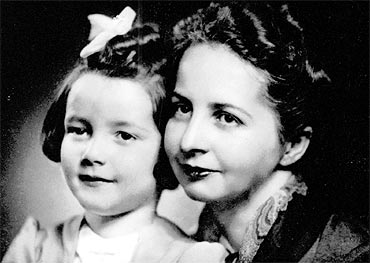 While a lot has been said about Netaji Subhas Chandra Bose's 1941 escape from British India and his perilous 90-day submarine voyage, his marriage continues to remain a secret. In the second part of his four-part interview to Arthur Pais, biographer Sugata Bose talks about Netaji's love story.

It was in 1993 that a historian handed over to the author some 165 letters written by Subhas Chandra Bose to his wife Emilie, whom he secretly married in Austria. This came as a huge and pleasant surprise to Sugata Bose, he admits. "The last major biography of Netaji was published in 1990. Brothers Against the Raj by Leonard Gordon is a very good book but unfortunately he did not have access to the correspondence between Netaji and Emilie," the author said.

Tell us about the letters.

We all knew about the relationship and the marriage when we were growing up but the fact that there were so many letters was something of a surprise. I jointly edited these letters with my father and the book was published in 1994. When we went to see my grand aunt Emilie and her daughter, my aunt Anita, in Augsburg, Germany, and gave her the book, we had a little celebration in 1994. She said she was celebrating the 60th anniversary of her first meeting with Subhas Chandra Bose in 1934, but then she suddenly said, you know there are three letters I did not give you last year, and particularly one. Then she turned to my mother and said, "This is for you. It is a love letter." And it was the most beautiful letter.

The romantic, deeply emotional side of Subhas Chandra Bose, and the kind of lyricism reflected in the letter that he was writing to the woman he loved, was I think a surprise even for me even though I knew about the depth of their relationship. It also underscored the personal sacrifice that both of them made because of Netaji's first love -- his country. He was constantly having to leave Emilie and go back to India in 1936 and then again in January 1938. And then, when you think of it, their daughter Anita was born on November 29, 1942 and on February 8 the next year, he was embarking on his submarine voyage.

After 1943, he never saw his wife or daughter again because he had gone to Southeast Asia to fight his final battle for India's freedom.

'Netaji kept his marriage a secret to avoid unnecessary upheaval' 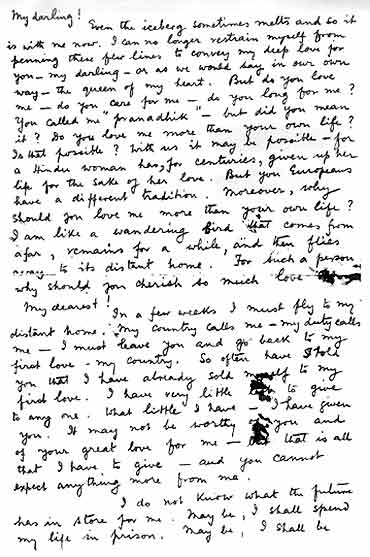 Image: One of the many letters Netaji wrote to his wife

Why was his marriage a secret?

Emilie, who had worked as a secretary to Netaji in Austria, got married to him in December 1937. They chose to keep it a secret. In fact, it was when I was putting together their correspondence that I asked her despite the obvious anguish -- Why did you decide to keep it a secret? She said that it would have caused unnecessary "upheaval".

She never fully explained; but I think she felt that he was completely absorbed by India's freedom struggle. Everyone around him expected him to be almost single-mindedly devoted to that struggle for freedom and she thought that it was sufficient that he was making a private commitment to her, which he could redeem only once India was free. She once said that he was about to become the president of the Indian National Congress and there was work to be done and so on.

Again, one could have many different interpretations. With hindsight, on one hand, I could say that maybe it wouldn't have been as much of an upheaval as they had thought. On the other hand, India's freedom was this man's mission and they both agreed to keep mum on the relationship. We also have to give them their right of choice to do what they wanted. 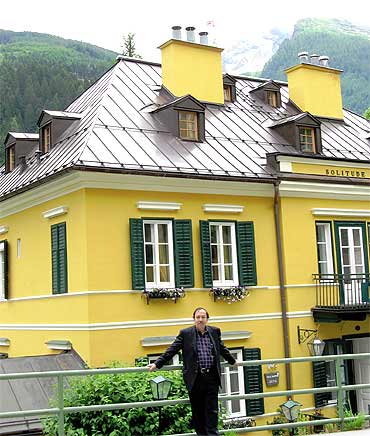 When did people learn about their marriage?

The family at large and the rest of the country came to know about it when the letter was in fact sent to Sarat Chandra Bose. He eventually went to meet Emilie with his wife Bivabati, his son, my father Sisir Kumar Bose and his two sisters (my aunts). They welcomed Emilie into the family. She then went Vienna in 1948. From then on, of course, the family kept in touch.

Emilie brought up Anita all by herself in Vienna. They had a very hard time in 1945. But Emilie was a woman of enormous dignity. She had an independent spirit and she would not ask for help. She was very knowledgeable when it came to India; she never visited India but she knew everything about India.

I had seen her and my aunt Anita as small child. I met them first when I was about three years old in 1959 and then my aunt Anita came to India in 1960. She stayed with us.

I used to meet them very frequently when I was a student at Cambridge University in the late '70s and early '80s. That's when I talked at length with my grand aunt. Emilie remained completely devoted to Subhas throughout her life. Even in absentia he really dominated her life. She brought up my aunt, Anita, who became an economist and statistician in the field of economics of health.

My aunt married and took her married last name Pfaff. Her husband, my uncle Martin, for quite a few years, was a Social Democratic Party member of parliament in Germany. Sometimes, when my mother was chairperson of the parliamentary standing committee on external affairs in India, she would hold meetings with her German counterparts and there would be my uncle Martin on the other side, the German side.

Both Aunt Anita and Uncle Martin were professors at Augsburg University for many, many years and live in Augsburg now. In fact, I have driven from Cambridge on the road along the Rhine Valley to visit my aunt and then driven from Augsburg to Vienna to visit my grand aunt. This was until the early 1980s. When my grand aunt Emilie grew older she moved from Vienna and lived with my aunt Anita. So, in the last decade of her life she lived in Augsburg. She passed away in 1996.

'Anita has no memories of her father, but has read all about him' 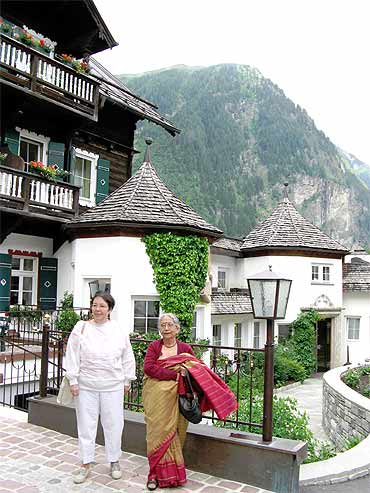 How much does Anita know of her father?

I think, like everyone in South Asia and like everyone who knows Subhas Chandra Bose, she admires her father greatly. But I know that she missed a father figure in her life.

When my father was training in medicine (this was after the end of the war in the late '40s), he was, for about six months, in Vienna. They developed a very special bond. So, for the first time when she was about seven or eight years old, and my father was in Vienna, there was an older male member of the family. Aunt Anita and my father kept in touch until my father passed away just over 10 years ago.

What did Anita call your father?

You know, in those days, she, in very European fashion, called my father by his first name, Sisir. In her early letters she addressed him as my dear brother Sisir.  It is only after she grew up that she referred to my father as Lal-da or Lal-dada, which is what all the other younger siblings called him.

You know, I travelled everywhere for this book -- to Kolkata, Delhi, London, Singapore, Tokyo, Berlin and so on. But of all the trips that I took, as part of the field research for this book, the most fascinating one was when I travelled with my mother Krishna, my younger brother Sumantra (who is professor of international and comparative politics at the London School of Economics), my aunt Anita and my uncle Martin.

I drove from their home in Augsburg towards Salzburg in Austria and then we turned towards Badgastein. While writing this book, I felt the need to visit Badgastein because so many of the letters of Subhas and Emilie referred to that mountain town. It was their favourite hill resort. And, we actually found the Kurhaus where they used to stay. We went and had coffee at Grunerbaum where they used to go and have coffee.

You were asking what my aunt Anita remembers. This is not something I found in letters. But, you know my grand aunt had told her that they used to go for very long walks from the Kurhaus where they were staying to Grunerbaum for coffee. It was quite a long distance to walk. We were able to drive to the same place and have coffee. Badgastein is a beautiful idyllic place. I can understand why Netaji found the magic mountains around Badgastain so enchanting. There are also thermal hot springs there.

I met my aunt Anita in December last year. I had gone to give a lecture in Cologne and made a flying visit to see her in Augsburg.

Tomorrow: Sugata Bose on why Netaji is not Shyam Benegal's Forgotten Hero