Sign in  |  Create a Rediffmail account
Rediff.com  » News » A professor who sees common thread in Sanskrit, music and math ‘As a child, I enjoyed studying Sanskrit, Sanskrit poetry and Indian classical music. I saw math in all these things,’ says Manjul Bhargava, the first Indian-origin person to win the Fields Medal

On Wednesday, he won Fields Medal, often described as the 'Nobel Prize of Mathematics', and was chosen one of the four best mathematicians globally. He is the first Indian-origin person to win this medal.

"As a child, I enjoyed studying Sanskrit, Sanskrit poetry and Indian classical music. I saw math in all these things; that further inspired me to pursue mathematics. When I went to college, I took Sanskrit, a lot of music, computer science and physics, and also mathematics. To me, mathematics was the common thread in all these subjects," he says.

A graduate in mathematics from Harvard University and a PhD from Princeton University in 2001, Bhargava is also a recipient of the Infosys Prize for Mathematical Sciences, which he received in 2012. "Today is an incredible day of celebration for all of us Indians… This (Fields Medal) in some sense is harder to win than the Nobel, since it is awarded once every four years and the winner has to be younger than 40 years old. This is an extraordinary and rare achievement," says N R Narayana Murthy, co-founder & chairman of Infosys, the country's second-largest IT services firm.

In a world where students are losing interest in research in pure basic sciences, Bhargava is an exception. As a child, mathematics always fascinated him. "One of my early childhood memories was stacking oranges in the form of a pyramid. My work primarily revolves around understanding whole numbers like prime and square," he says.

After finishing his PhD, Bhargava joined Princeton University as a professor in 2003. His primary research interests lie in the number theory, representation theory, and algebraic geometry. Since then, he has earned several awards and citations for his contribution to many critical areas of mathematical research and algorithm, including Derek Bok Awards for Excellence in Teaching, Hoopes Prize for Excellence in Scholarly Work and Research from Harvard University and AMS-MAA-SIAM Morgan Prize for Outstanding Undergraduate Research in Mathematics. 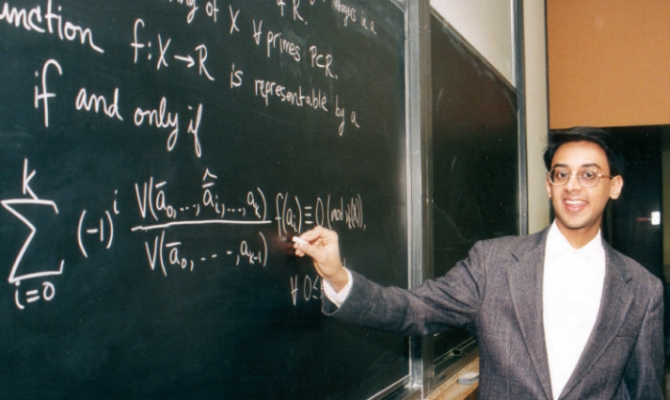 The Fields Medal this year was conferred on him for developing powerful new methods in the geometry of numbers, which he applied to count rings of small rank and to bound the average rank of elliptic curves.

Named after Canadian mathematician John Charles Fields and instituted by International Mathematical Union, Fields medal is awarded once every four years to exceptional talents under the age of 40. Though the award carries cash prize of around 15,000 Canadian dollars, it is considered the highest honour in the field of mathematical research.

He was born in Canada and brought up in the United States but Bhargava, with roots in Jaipur, has a strong connection with India. "We speak Hindi at home and celebrate all Indian festivals. I am pretty much an Indian at heart." 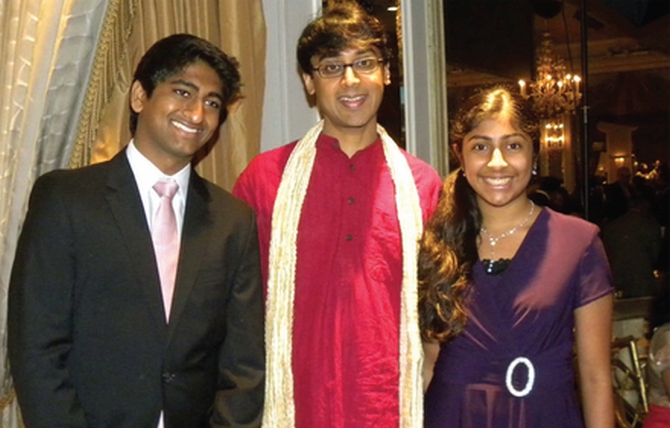 Besides mathematics, which is his first love, he is also an accomplished tabla player; he learnt that art with Pandit Prem Prakash Sharma and Ustad Zakir Hussain.

"I first met him when he won the Infosys Science prize three years ago. If you meet or talk to Manjul, you will find he is very passionate about India and has his interests close to his heart. He is as unassuming and friendly as he is brilliant," Murthy adds.

Bhargava feels very sad about the state of scientific research in India. Despite having very good mathematical talent, many are getting attracted to engineering and medicines for "easy money", he says, adding this is a mistake that might prove costly, not only to the individual but to the country.

"Science is also a very collaborative discipline... So, doing scientific research is like a big venture that gives you an amazing feeling… it is a lot of fun and it is very important for the world," Bhargava says.