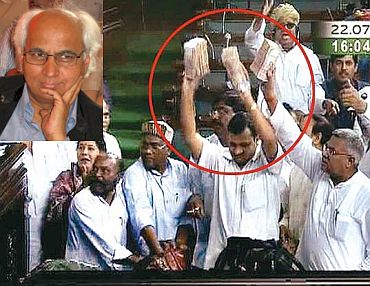 Sheela Bhatt in New Delhi
Sudheendra Kulkarni tells rediff.com's Sheela Bhatt that he feels vindicated after the Wikileaks expose on the alleged 'buying' of MPs during the 2008 confidence vote of the United Progressive Alliance government.

"They thought the cash-for-votes scam is buried and over. But, the truth would continue to surface," says Sudheendra Kulkarni, who was the whistle-blower of the scandal that manufactured a majority for the United Progressive Alliance government in July 2008 in the Lok Sabha.

Kulkarni, who was then heading election campaign office of Bharatiya Janata Party leader L K Advani, had planned and executed a sting operation to expose the UPA government's attempt to buy MPs to vote against no-confidence motion before Parliament on the issue of the Indo-US nuclear deal.

The Left parties had then withdrawn support. But on floor of the House, the Samajwadi Party supported the government and the opposition lost the motion.

Kulkarni told rediff.com, "Wikileaks is fully corroborating my story. Three BJP MPs and I were eyewitnesses to the money paid to them. The entire operation was recorded by (television news channel) CNN-IBN. Unfortunately, they didn't share it fully with the parliamentary committee headed by K C Deo that was formed to investigate the cash-for-votes scam"

'Wikileaks is just corroborating what we recorded on tape' 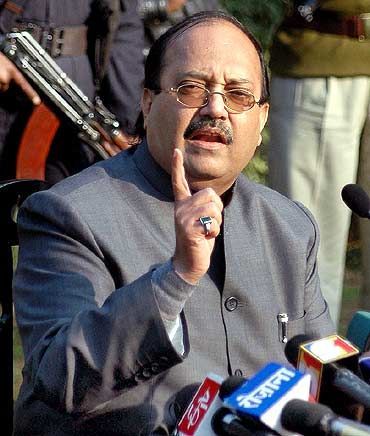 "Wikileaks is just corroborating what we recorded on tape. Deo sided with his party and behaved as a Congressman. He passed the buck to the home ministry. The home ministry has done nothing so far."

It was no surprise that Amar Singh, who was allegedly a main player in the scandal, was not even called by the probe committee.

In fact, when Kulkarni mailed his statement to the media, the committee sent him a notice for breach of privilege.

Kulkarni says, "Deo committee's mandate was to clear Amar Singh. As I said, CNN-IBN has recording of the entire operation, which shows footage of how the BJP MPs went to Amar Singh's house at 4, Ferozeshah Road and how his close associate handed over the money to BJP MP Ashok Argal. Every action is captured on camera, but the channel submitted truncated footage before the committee."

'You cannot expect an admittance of guilt from the UPA' 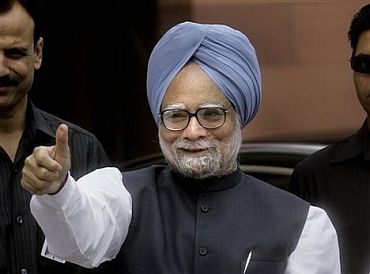 Kulkarni said, "You cannot expect an admittance of guilt from the UPA government because they survived only by enacting the scandal. But those who are committed to democracy should ponder how a nation can function if the government pays cash to elected representatives of people. Communist Party of India leader A B Bardhan had said that each MP was offered Rs 25 crore by the UPA government. Now, Wikileaks gives more evidence of it -- that very high-ranking Congress leadership was involved neck-deep in this corruption."

When asked about revelations against Satish Sharma, he said: "I am not surprised. There were many players behind the scam. In my statement, I have mentioned about Ahmed Patel. I believe Amar Singh was working for the Congress. There were many others. Just because their names didn't come out in 2008, it does not take away the main thrust of the scandal."

Kulkarni said, "Even now the scandal can be investigated. CNN-IBN has the tapes that show the opening and closing serial numbers of the currency notes that Amar Singh's man (Sanjeev Saxena) gave to the BJP MP. The same notes were produced inside the Lok Sabha."

"The agency can match those numbers and make out a criminal case. All that Deo committee had to do was to ask CNN-IBN to produce those tapes and match the numbers with notes in their possession. Since I was involved at all levels I am saying that there are tapes that show the close up of serial number of notes that were given as bribes. That's the evidence."