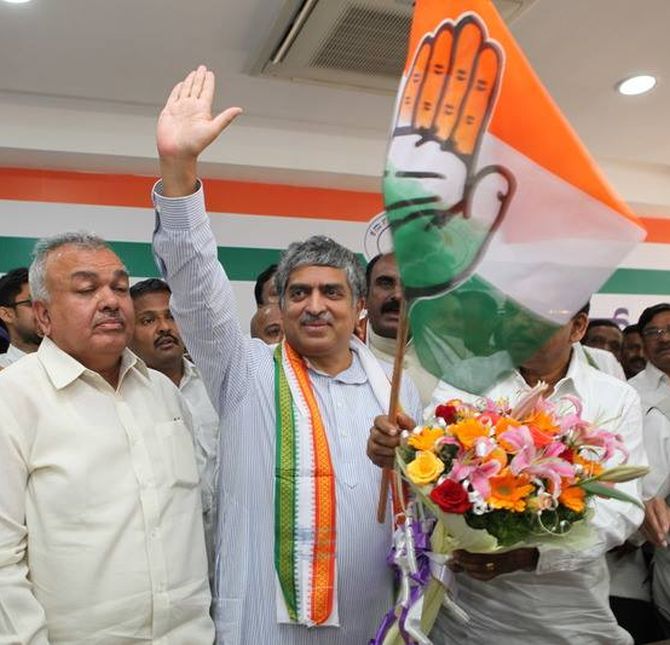 Image: Nilekani waves to his supporters as he is officially inducted in Congress on Sunday
Photographs: Courtesy: Nandan Nilekani's website Vicky Nanjappa in Bangalore

The Congress has huge hopes from the billionaire technocrat-turned-politician and UIDAI chairman. Nandan Nilekani -- billed as an ‘ordinary Congress worker’ -- is making all the right noises in the prestigious and highly-educated Bangalore South constituency. However, experts are unsure whether he will be able to counter the massive ‘Modi wave’ in this BJP bastion. Vicky Nanjappa reports.

This is the one sentence that Nandan Nilekani says as he officially commenced his campaign for Bangalore South. The Infosys CEO-turned-chairman of the Unique Identification Authority of India got the Congress ticket to contest the forthcoming Lok Sabha elections from the significant constituency on Saturday. Although the technocrat-turned-politician official joined the Congress on Sunday, he has been interacting with the people in Bangalore South for the past few weeks.

“It’s heartening to see the energy and the passion of the people on the ground. This is not just about me -- the demand from our people is for more energy and vision in the public space. I deeply believe that the more people with a vision, a passionate agenda, get involved, the more we will see the kind of politics we dream of,” he tells the voters.

'Not a typical politician' 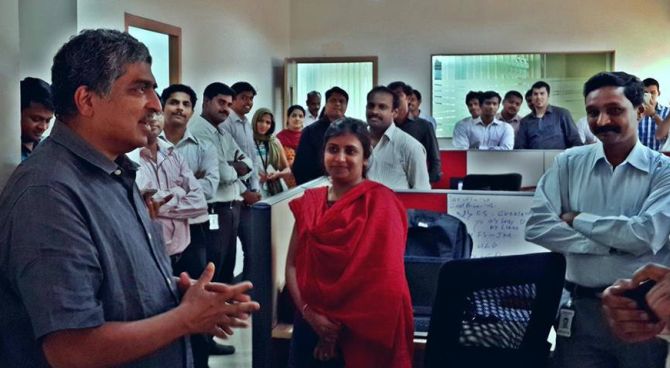 The Congress does have a lot of hope in Nilekani and their optimism is apparent as he has been given the prestigious constituency. However, the Bharatiya Janata Party refuses to take him seriously.

“Nilekani joined the Congress as an ordinary worker” is what he and the rest say, but then the huge reception he got on Sunday clearly indicated a different story. The crowd that had gathered and the scores of Congress bigwigs alongside him went on to show Nandan Nilekani means a lot to them.

He has specifically been chosen by the party high command as it feels that Nilekani is the kind of candidate who would make a difference in this highly educated constituency.

Nilekani no doubt is suave and is making the right noises in the constituency. His campaign had started much before he officially joined the Congress. In fact there was never any suspense regarding his candidature and the party knew that he would not fit anywhere else but in Bangalore South, home to a major IT crowd.

Watching Nilekani campaign gives the impression that he is adopting a ‘one on one’ interaction technique. He is very comfortable while speaking to the educated members of the constituency especially the IT crowd and students. However, when it comes to the rest, “he is not yet the typical politician,” comments a Congress supporter.

'With me you can expect the change' 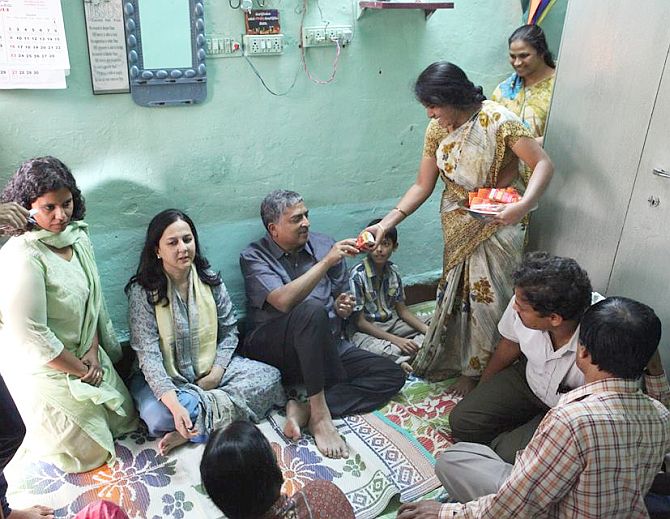 Bangalore South has been a BJP bastion for over two decades now, and the Congress won here last in 1991. However, Nilekani feels that it is time senior BJP leader and sitting MP Ananth Kumar is shown the door, and pins his hopes on the youth, IT workers, professionals and women to achieve the goal.

Nilekani decided that he must start early and despite not being officially in the Congress or nominated for the seat, he chose to start his campaign almost 45 days in advance. His team made sure that he was on posters all across Bangalore South. He stayed in the media all the time. He wanted to ensure that he was seen all the time and the billionaire even got on to the public bus service, BMTC and interacted with the people on board.

He attended several meets in colleges and all through relied heavily on the personal context of a campaign. He has visited over 400 houses till date and has had personal interactions with the people.

He spends a considerable amount of time with each voter explaining the need to root out corruption and also vote for a change.

“With me, you can expect that change”, he often conveys to the voter.

'If Congress is not clean, BJP isn't either' 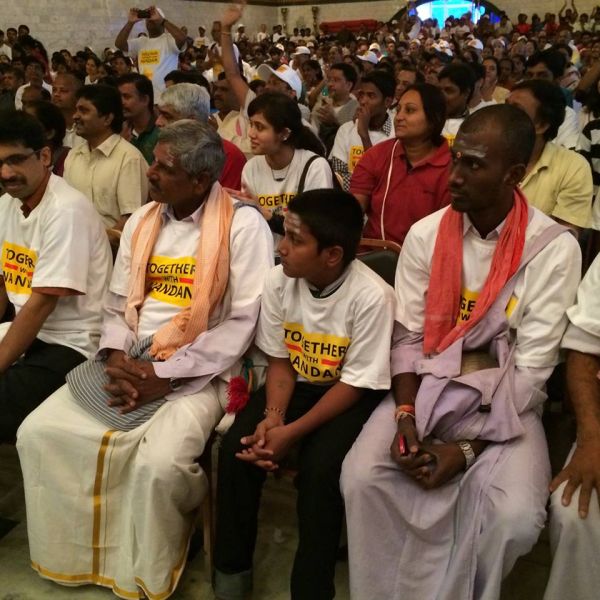 When questioned on the numerous corruption charges against his party members, Nilekani is quick to retort angrily that the other party is not clean either.

Nilekani does have his task cut out and the reception that he got on Sunday is something that no other leader in the Karnataka Congress has got in the recent past. There was drumming, chaos and huge crowds gathered as he joined the party.

His supporters in fact are extremely optimistic about his chances. They say that he will win without a doubt and will become the next prime minister.

Nilekani too is optimistic and says that he is confident of winning. “It is time for change and politics needs change with clean people in it”, he said on being asked.

'The man who ensured Aadhar cards for 60 crore people' 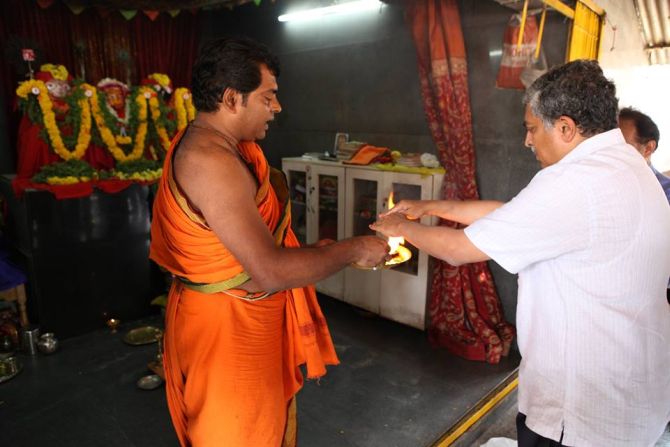 Nilekani has been belting out the Aadhar issue a lot during his campaign. Much to the dislike of the BJP, who complain that he cannot use a government programme during his campaign, there are still posters which say Nilekani is the man who ensured 60 crore people got their Aadhar cards.

Nilekani relies heavily on his Operation Agile during this campaign. This programme aims at changing the traditional style of connecting with the masses. Public forums will be used to address rallies, but there will also be a lot of emphasis on the social media where he expects people to interact and suggest. He seeks ideas for Bangalore and also intends to engage the youth. There is a specific part of his campaign which also targets the IT sector, a sector where he is not a stranger at all. While the Congress is all smiles about Nilekani and considers him the best man to beat Ananth Kumar, there are a couple of issues that would concern them. First and foremost despite all this hype surrounding him, Nilekani still may not be used for campaigns outside his constituency.

They feel that the dynamics in other constituencies are different and Nilekani is not the man to address it.

However, the biggest drawback for Nilekani would be the fact that many feel that Congress is not returning to power. Is it worth having an MP from the Congress when the party is not at power in New Delhi, many would think.

His rival Ananth Kumar has been belting this point out a lot and says that Narendra Modi is the best choice for the country and he will be the prime minister.

Voting for the BJP in Bangalore South would mean voting for Modi, he says.

There is no doubt that Modi is a major factor in Bangalore South. Will Nilekani be able to beat this factor and the traditional BJP vote? The experts do not feel so.