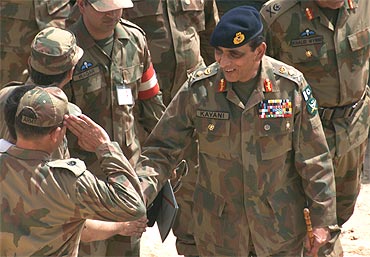 Salman Taseer, the governor of Pakistan Punjab is dead, killed by his own guard who, it is being said, could not tolerate his liberal views, especially in relation to the draconian blasphemy law.

By his death, Taseer has joined a growing list of liberal leaders in Pakistan who have been killed because they were against the radical Islamisation of their country.

The list of others who have met a similar unfortunate fate is headed by, Liaquat Ali Khan, the first prime minister of Pakistan who was shot on October 16, 1951 at Rawalpindi.

The next was Zulfikar Ali Bhutto, the first elected prime minister of the country, who, despite his obvious limitations, was a modern and secular leader dedicated to evolution of socialist democracy in his country, and his daughter, Benazir Bhutto, who was assassinated on December 27, 2007 probably by a cadre of the dreaded Lashkar-e-Jhangvi, an off shoot of the Al Qaeda, lost her life because she was perceived to be a stooge of the Americans. 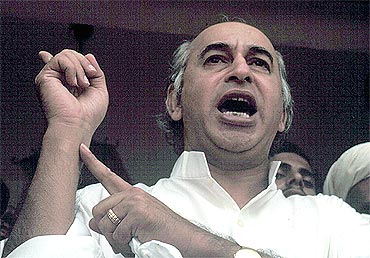 In Pakistan, the assassination of a liberal leader is invariably followed by instability and political turmoil, which in turn, paves the way for the imposition of martial law.

The murder of Liaquat Ali Khan was the harbinger of the first spell of martial law orchestrated by the then President Iskander Mirza in collusion with the commander-in-chief of the Pakistani army, General Ayub Khan in 1958.

Zulfikar Ali Bhutto was on the threshold of stabilising democracy when he was deposed by then army chief General Zia-ul-Haq on flimsy grounds, subjected to a farcical trial and hanged.

General Zia-ul-Haq then declared himself as the president of Pakistan, systematically undercutting democratic norms and bringing in a draconian Islamic culture to sustain his hold over the country.

To keep popular sentiment going in his favour, he instituted the policy of engineering terrorism in the name of Jihad in Kashmir.

Benazir Bhutto came back to Pakistan with a huge popular mandate and was poised to bring about a major change in the system when she was killed in December 2007.

The democratic government that took over the reins of the country after her death, though led by her own party, has, however, dismally failed to deliver.

It is reeling under pressure of the religious war lords on the one hand and the intimidating shadow of the army on the other.

Was Tasser's assassination a part of a larger political ploy? 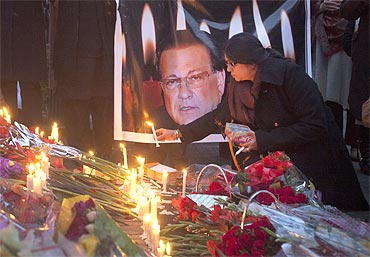 Image: A woman lights a candle next to an image of the governor of Punjab Salman Taseer near the site of his assassination, in Islamabad
Photographs: Faisal Mahmood/Reuters

Coming back to the assassination of Taseer, his assassin, Mumtaz Hussain Qadri, has confessed that he shot Taseer because of the latter's stand on blasphemy laws. This cannot be taken at face value, because a security guard would probably not hold political views strong enough to lead to the shooting of a governor.

There is every possibility that the assassin had been indoctrinated on the path of Jihad in one of the numerous madrassas operating in Pakistan.  It is hoped the investigation into the killing is transparent enough to throw some light on this possibility.

The situation in Pakistan and the region is likely to feel the affect of this incident sooner than later.

It has now been firmly established that political violence in Pakistan has spread its wings outward from the tribal regions into the country's heartland.

Pakistan is in the throes of a large number of problems 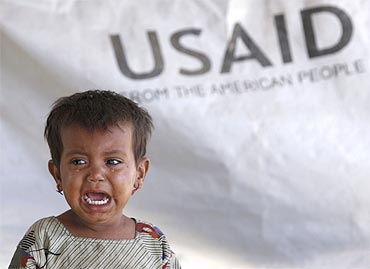 Image: A three-year-old girl cries as she sits in her family's tent while taking refuge following floods on an embankment at Chandan Mori village in Pakistan's Sindh province
Photographs: Akhtar Soomro/Reuters

Apart from its homegrown insurgency, Pakistan is in the throes of a large number of problems. These include ineffectual handling of last year's floods, which can be safely termed as the worst ever disaster that has visited the nation, a near defunct economy and political turmoil engineered by unscrupulous political coalitions to keep the government afloat.

Political assassinations are just one tool that the Islamic fundamentalists are using to establish their writ in Pakistan.

Sustained communal violence is yet another significant card that is being played liberally. Those Muslims who chose to leave India to become a part of the Pakistani experience are still termed as "Mohajirs", and they continue to live as minorities.

The non-Wahabi population of the country is constantly subjected to violence and atrocity. Votaries of different Muslim sects are subjected to suicide bombings, Ahmadiyya's praying at their mosques are attacked by terrorists, Hanafi-Barelvi-Sufi's are massacred for the crime of taking out a procession.

Govt has been a mute spectator to breakdown of Pak 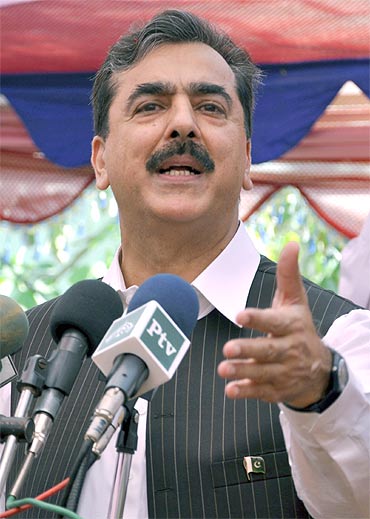 The much talked about blasphemy law is being blatantly misused for personal and sectarian gains and also to spread a culture of religious intolerance.

Amidst all this, the government of Pakistan is a mute spectator of the virtual breakdown of civilisational norms and the writ of the state.

The series of violent incidents that are taking place across the country, when seen in against the backdrop of the weak federal government and growing power of religious fundamentalism, lead to a few pertinent questions.

Is this assassination a clarion call for the return of martial law in the country as was the case in previous such incidents?

Is the Pakistani army, with active assistance from the infamous Inter Services Intelligence, methodically creating events that would lead to yet another military coup?

Is the Pakistani Army Chief General Ashfaq Pervez Kiyani, taking a step by step approach that leads to his being invited to become the martial law administrator and president before his unprecedented three years extension in the present appointment comes to an end?

Finally, is there a nexus between the Pakistani army, the religious extremists and the ISI to further the agenda of Talibanisation of the region?

Are these two forces following a -- you scratch my back, I scratch yours -- policy?

Taseer forfeited his life on the mantle of his ideals and his progressive vision which was a stumbling block for forces in Pakistan that were far more powerful than him.

His death should be enough reason for the international community to reassess the situation in Pakistan and come up with some concrete methods to stem the flow of radicalism.