Is India ignoring the new trends in Pakistan? 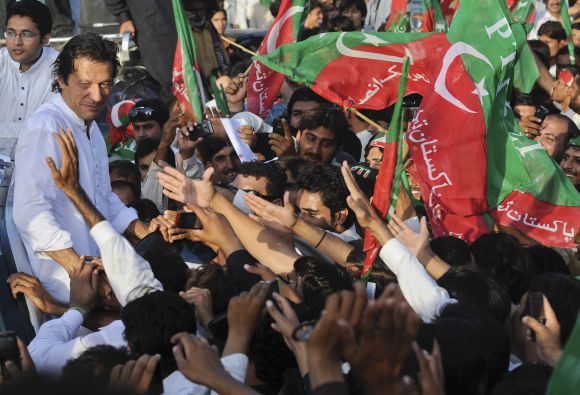 Image: Imran Khan surrounded with supporters as he leads peace march against US drone strikes in Mianwali in October, 2012
Photographs: Reuters Seema Mustafa

Unfortunately the new trends in Pakistan are going unnoticed by the myopic strategic establishment of India, and if television news channels are anything to go by, the Indian perspective of Pakistan is stuck in decades past, notes Seema Mustafa.

People in Pakistan are desperate for a change. This has been apparent for over a couple of years now to those who care to see, with the younger generation of that country having come of age, with new aspirations, demands and ambitions.

The yearning for change has been visible in the crowds that gathered behind cricketer-turned-politician Imran Khan, 15 years after he had been in politics, in the hope that he would indeed give teeth to his promise to make a difference.

The young in particular swarmed around Imran Khan and his political party, as in a murky political horizon he remained an untested virgin. His loud rhetoric against corruption helped, more so as he himself had not been tainted with the dirt that had engulfed most of the Pakistan's politicians over the years.

The young people who came to him passionately defended Khan against rumours that he was being propped up by the army, or was close to the extremist elements, insisting in loud arguments with others within Pakistan and outsiders such as this columnist, that he was a genuine political entity and if given a chance would take Pakistan out of the deep waters.

Over a year down the line some of that enthusiasm has faded, and Imran Khan is finding the going tough.

Qadri is for peace while aggressive in his views 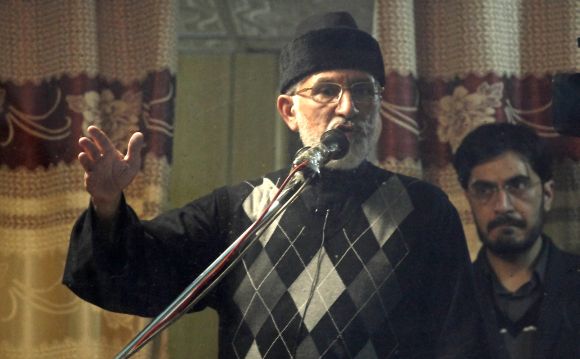 Image: Dr Tahir-ul Qadri addresses his supporters behind the window of an armoured vehicle in Islamabad
Photographs: Mian Khursheed/Reuters

But more recently the Canadian cleric Tahir-ul-Qadri has emerged to almost replace Imran Khan insofar as the numbers game is concerned. Thousands rallied behind him -- in fact an email thread has Pakistani's hotly arguing about the numbers -- as he led a huge march from Lahore to Islamabad demanding electoral reforms, the dissolution of Pakistan's assemblies and the resignation of the "corrupt" government led by President Asif Ali Zardari.

His successful meetings and charismatic personality have catapulted him onto the national, and almost on to the international, stage. He is opposed to terrorism and is the proud author of a 600-page fatwa against terrorism.

He belongs to the Sufi strain of thought, and had visited India last year for a month speaking at meetings, including in Gujarat. This has led a section in Pakistan to describe him as an "Indian agent" particularly as his diatribe against the extremists and the government has acquired a cutting edge these days.

Qadri has been a member of the National Assembly and resigned voluntarily several years ago. He founded the Minhaj- up-Quran and former prime minister Benazir Bhutto became a member of this organisation in London before her death.

Qadri is well connected and after lying low for a decade has hit the Pakistan ground running. He is 62-years-old, is combative, is religious in a country where this matters, is anti-militancy, is for peace and while aggressive in his views is not dogmatic or partisan.

At least not in his new incarnation where he has taken the bull by the horn with the march to Islamabad worrying the government visibly. In fact even the opposition is not particularly happy about his emergence as he seems to belong to another league altogether and most political parties and leaders have united to oppose him. But the fact remains that the people are ignited, if the crowds can be taken as a yardstick of popular support. Of course his success will lie in his ability to convert the support into political support, or into a viable plan of action, and it remains to be seen whether he has the ability and the inclination to acquire sustaining power.

Interestingly, in Pakistan women and the youth are coming out to make their presence felt, whether it was behind Imran Khan and more recently in support of Qadri.

This constituency is formidable by any standards, and while some of the more cynical insist in Pakistan that this does not have staying power, others are not so sure. Time of course, will tell.

Rumours insist that Qadri is being supported by the Pakistan army that is looking for a viable and workable leader and political organisation that will allow it to remain in the background, and yet replace the PPP in government, and prevent the Pakistan Muslim League-Nawaz from coming to power. Relations between the army and President Zardari are iffy at best, while there is no love lost between the Pakistan army and former prime minister Nawaz Sharif.

Youth in Pakistan want to move ahead towards a future 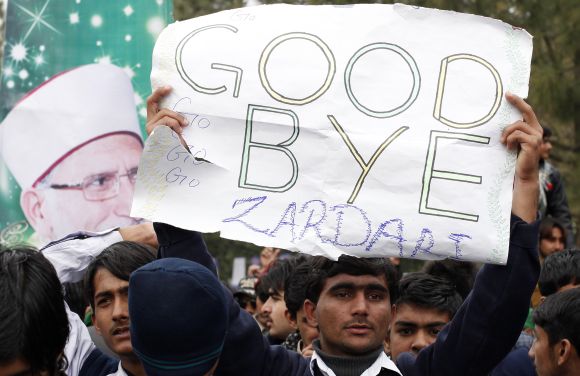 Image: A supporter of Dr Tahir-ul Qadri holds up a sign during the fourth day of protest in Islamabad
Photographs: Mian Khursheed/Reuters

The youth in Pakistan want to move ahead towards a future, peace, progress and employment. They are fed up of extremism, and of issues that drag Pakistan back into an era from where they want to escape. This is one of the many reasons why Islamabad is finding it difficult to reject peace, or raise issues that are seen by its people as blocking it.

For instance Pakistan has definitely put Kashmir on to the back burner, with lip service being paid to the issue at intervals by the likes of the Interior Minister Rehman Malik, but no longer in a manner where it derails the peace process.

Kashmiris have started feeling the alienation, and while this does coincide with the new generation of Jammu and Kashmir's aspirations for independence, the fact is that India-Pakistan civil society meetings are being held nowadays without Kashmir being at centrestage. So much so that articles are being written on both sides of the border about Pakistan's seeming disinterest in the Kashmir issue.

Unfortunately the new trends in Pakistan are going unnoticed by the myopic strategic establishment of India, and if television news channels are anything to go by, the Indian perspective of Pakistan is stuck in decades past.

There seems to be no recognition of the changes within Pakistan, no attempt to factor these into the bilateral policies, as our former ambassadors, and strategic experts join the journalists in shouting themselves hoarse as they continue to chase non-existent, or at least fast disappearing, shadows of the past.