Sign in  |  Create a Rediffmail account
Rediff.com  » News » 'Modi's cowboy politics will not work in all states' 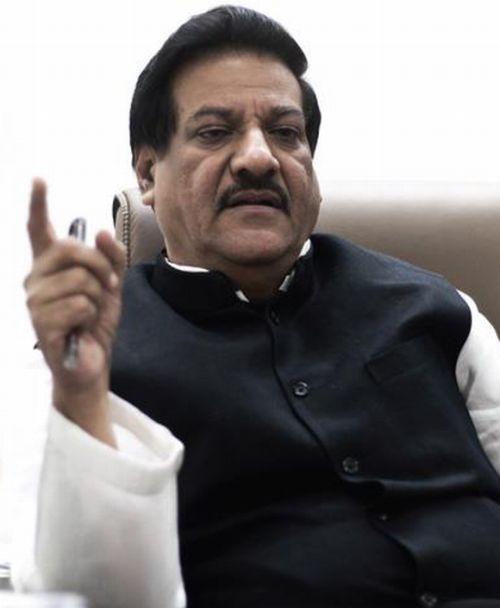 His stint as minister of state in the Prime Minister's Office and his proximity to Prime Minister Manmohan Singh provided him a ringside view of key national developments which unfolded after the Congress-led coalition came to power in 2004.

At the same time, Chavan also served as general secretary in the Congress organisation where he was given the responsibility of important states like Karnataka, Gujarat and Jammu and Kashmir.

Both these assignments have given him a keen insight into the functioning of the government and the party.

Chavan took time off recently from his hectic schedule to talk to rediff.com's Anita Katyal about the current political situation, Narendra Modi's projection by the Bharatiya Janata Party and the future plans of the Congress and the UPA.

How do you see the emergence of Gujarat Chief Minister Narendra Modi on the national scene?

There is no doubt that there is an anti-incumbency of 10 years against the Congress-led UPA government. We have to project the government's achievements more aggressively, and I think this is already being done.

Modi's emergence on the national scene was inevitable as far as the BJP is concerned, but it has not been without cost to the National Democratic Alliance. Once L K Advani took a centrist position and tried to take Vajpayee's place by praising Jinnah in Pakistan, the rashtriya Swayamsevak Sangh was quick to drop him. It then had to identify a new national leader. Other senior BJP leaders like Arun Jaitley and Sushma Swaraj did not measure up and could not occupy that position. Modi then emerged as its choice.

The BJP cadres are also enamoured with him. To them, he represents a hope of winning the next elections. As a result, Modi has been blessed by the RSS.

Modi's elevation has serious repercussions for the NDA in the run-up to the next general elections. It has been reduced to a rump after the Janata Dal-United walked out of the alliance. The BJP has been left with smaller parties like the Shiv Sena and the Akali Dal which have a presence in Maharashtra and Punjab, respectively.

There is a possibility of Tamil Nadu Chief Minister Jayalalithaa going with the NDA. As of now, the two parties in the NDA alliance have a minor presence. In effect, the BJP has taken the risk of going it alone in the 2014 Lok Sabha elections.

In contrast, the UPA alliance is intact.

How can you say that? The UPA too has shrunk; the Dravida Munnetra Kazhagam and the Trinamool Congress have left the ruling coalition.

I admit, some parties like the Trinamool Congress and the DMK have withdrawn from the government. But closer to the elections when pre-poll alliances are to be firmed up, we will have more supporters.

'A person votes for an MP and not a prime minister' 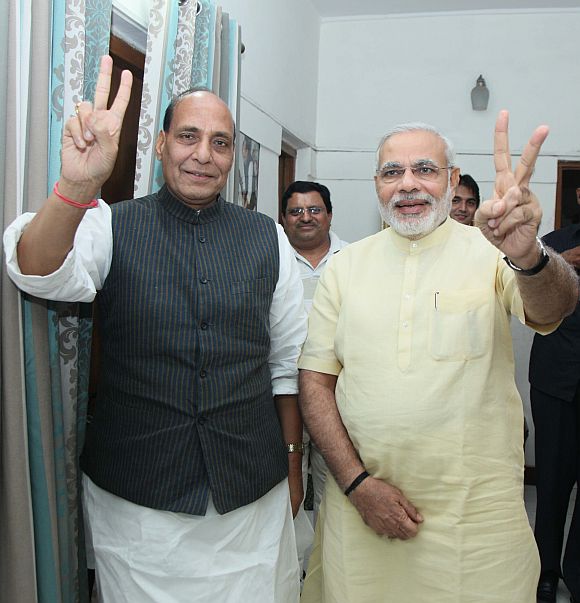 On the other hand, I am not sure if the BJP will be able to get more parties to support it. The BJP is hoping that it would be able to draw more partners after the elections if it emerges as the single largest party.

It believes Modi's projection will by itself get them closer to a majority. It's a pipe dream. The BJP has no presence in large parts of the country. For instance, it is not a force in the South -- it was recently washed out in Karnataka. It can only hope to get seats in the four states of Madhya Pradesh, Chhattisgarh, Rajasthan and Delhi which are headed for assembly polls later this year.

These elections will be a good indicator of the BJP's strength and whether its numbers will increase.

But with its present strength and numbers, to hope for a majority on its own is not possible or feasible. As the elections draw closer, the battle will be essentially between the BJP-led NDA and the Congress-led UPA.

It might have been better for the BJP to project a collective leadership with Sushma Swaraj, Arun Jaitley and Rajnath Singh at the helm. Had the BJP done so, it would have been able to keep parties like the JD-U in the NDA fold.

But Modi is proving to be a popular leader...

Modi is popular in the urban areas, but has virtually no appeal in the rural centres. The BJP wants to convert the next election into a presidential election, but this is not possible. The reality is that we have a parliamentary system in place and that cannot be wished away. Ultimately, a person votes for an MP and not a prime minister. 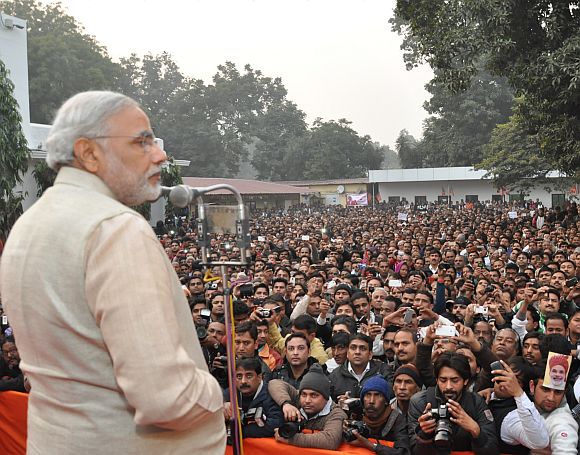 The BJP wants the 2014 Lok Sabha election to be a contest between Modi and Rahul Gandhi. But the Congress appears to be afraid of such a possibility.

As I said earlier, this is not a presidential election. It is incorrect to say we are scared of converting the next election into a Rahul vs Modi contest. It cannot be in a parliamentary democracy. Ultimately, elections are fought in every state and in every parliamentary constituency.

The BJP has always been in favour of replacing the Parliamentary system with a Presidential system in the country. This appeals to their belief in establishing the rule of the majority. In such a situation, can you ever expect a prime minister from a minority community to be elected?

Anyway, it is early days yet. Let us see how the situation unfolds in the coming months and closer to the elections. Modi is using western public relations techniques to appeal to the electorate but these cannot work beyond a point.

The RSS has given its support to Modi on the condition that its core issues like Ram Mandir and Article 370 will not be brushed under the carpet any longer and will be brought upfront. My understanding is that Modi has agreed to the RSS condition. 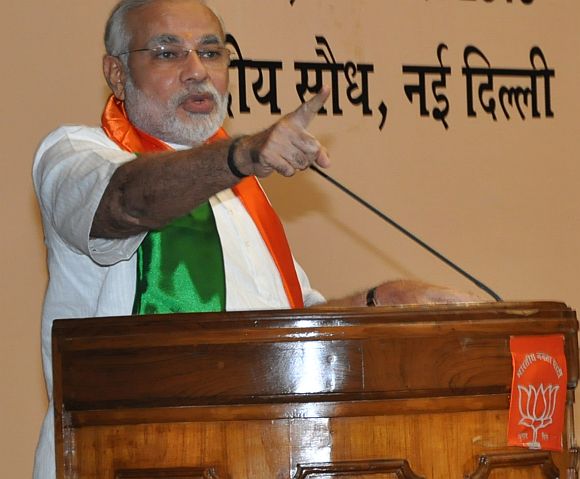 There is a perception that while BJP and Modi will focus on development, especially the Gujarat development model, in the coming election, the Congress wants to keep the spotlight on the secular-communal divide to deflect attention from its own deficiencies.

I don't think that is correct. Having been in power for 10 years, the Congress will highlight its achievements on the development front in the run-up to the elections.

Modi has been talking about the development he has done in Gujarat. We will contest his claims. In fact, all chief ministers have been pursuing a development agenda in their respective states but because of Modi's style of functioning, his achievements are getting highlighted.

Modi's cowboy politics will not work in all states. Ultimately, every state has to devise its own development model. The Gujarat model cannot be replicated in other states or at the national level.

But it is also true that Gujarat has not witnessed any communal violence after the 2002 riots.

It is the peace of the grave. Does Modi have any vision? What is his security model? Is Ishrat Jehan case Modi's idea of security? The UPA model of development is much better. It focuses on inclusive growth and that is what we will talk about in our campaign. Inclusive growth is a far better articulation as it goes beyond minorities, schedule castes or other groups. It is much wider; it means caring for the last man.

'The perception that I don't take decisions is highly exaggerated' 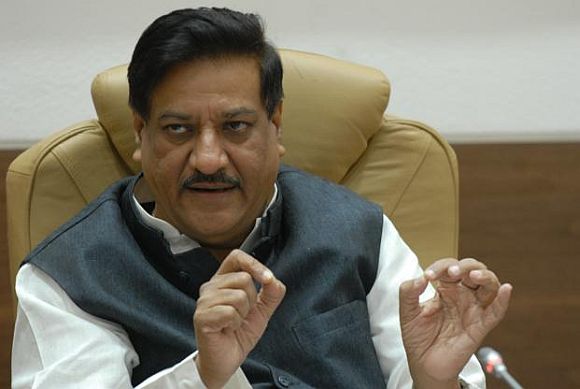 Talking about your home state, Maharashtra had a severe drought but predictions of a good monsoon must be a great relief for you.

I agree, it is a huge relief but we need a permanent solution to this problem. We have spent Rs 5000 crore on drought relief. If the rains are good, it is fine but if they don't come, we will have distress again.

Have you settled down in your present post? Are you still being told that you don't take decisions?

I feel much more in charge today. The perception that I don't take decisions is highly exaggerated. These are nothing more than a few complaints by a handful of individuals. Just to give you an example. We have Rs 40,000 crore worth of infrastructure projects on the drawing board while Rs. 5,000 crore worth of projects have already been inaugurated.