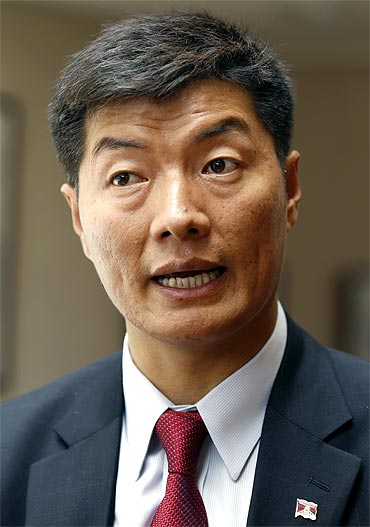 With His Holiness the Dalai Lama having devolved his political power, Dr Lobsang Sangay, who was elected Kalon Tripa (prime minister) of the Tibetan government in exile on April 26, speaks about changes to the Tibetan charter, the new role of the Dalai Lama and the Tibetan administration's relations with China. The second and final part of his interview with Claude Arpi.

Can you comment on the amendments to the Tibetan charter and the new role for His Holiness the Dalai Lama?

He announced that he will devolve his political power to an elected leader on March 10. Immediately the parliament appealed to him to change his decision. On March 19, he gave strong reasons why he had decided to devolve his powers. Then it was decided to call a national general meeting with 418 delegates from all over the world. They made a final appeal to His Holiness to remain the nominal head of the state. This was also rejected.

Finally, we were left to amend the charter with a preamble and three provisions that have been accepted with some dilution (or explanations).

Here are some of the points: The Dalai Lama is the most revered leader. He will continue to represent the Tibetan people, he has accepted to 'share' his opinions with the cabinet and the assembly (he will not 'advise', as this could be considered as 'orders' by the Tibetan people). The cabinet will appoint representatives and envoys, who will be allowed to use his name.

The Chinese have always said that they will only receive the Dalai Lama's representatives, not representatives of the cabinet. What will be the title of the 'envoys'?

The charter mentions it as, 'Appointed by the cabinet in the name of the Dalai Lama'.

Will this be accepted by the Chinese?

It has to be seen. They should! They should talk both with His Holiness the Dalai Lama and the Tibetan administration. We are for dialogue, for genuine autonomy. They are sometimes too obsessed with technicalities.

If they accept to talk to your representatives, would it be a sort of acknowledgment of the democratic system that they don't have, in which they don't believe?

Yes, unfortunately, but we are what we are.

For example, will you try to meet the Chinese ambassador in Delhi?

I don't know the Chinese ambassador, but we are always ready to have a dialogue with Chinese officials.

From our side, we have extended our hand, all along. That is our commitment. The present tragedy cannot continue if we want the Tibetan issue to be solved peacefully; it is the only solution.

In Tibet today, photos of the Dalai Lama are banned, you can go to jail, sometimes be tortured for possessing one. It is unacceptable. There is a universal declaration of human rights!

There has been no real progress in the contacts with the Chinese since the time Gyalo Thondup, the Dalai Lama's elder brother, met Deng Xiaoping in March 1979. Do you think the middle path has been a failure?

From our side, we have done all we could and are still doing it. There is a stalemate because the Chinese government has maintained a hard-line policy. That is the reason. If they moderate their stand, we will always be there to negotiate with them. 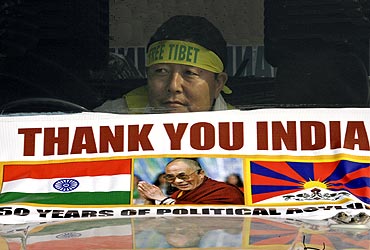 Image: A Tibetan exile holds a banner
Photographs: Rupak De Chowdhuri/Reuters
Is it to their advantage to solve the Tibetan issue?

Oh yes. They believe that today they have money power, but they will have more power if they solve the Tibetan issue, they will have moral power. People from around the world will look at them and respect them. Today they rule by fear. It is artificial; it does not help to improve their status. The only way that they can get moral authority is by solving the issue of Tibet.

Would it be good for their image?

They always fear 'losing face'. For them, it is so important. If they really want to have a respectable, moral face, I tell them "solve the issue of Tibet". They have a 5,000-year-old civilisation; an act of civility can help solving the issue of Tibet.

People say that you have no experience of Indian bureaucracy and politics? How do you envisage dealing with this?

I lived and grew up in India. I think and act like Indians. I understand the Indian system. India is the most important country for Tibetans. It is where the largest number of Tibetans live and it is where the Tibetan administration is located.

India is our second home and we are always grateful to the Indian government and the people of India. It is they who host us. They have hosted us in the past and are still hosting us. India has always been sympathetic to us.

Are you planning to introduce something like a Right to Information Act to make the Tibetan administration more transparent?

The reputation of the exile administration is based on transparency and effectiveness. We are effective in executing any programmes. More than 90 per cent of any project goes directly to the people. It is transparent, that is why funders like it.

But what about introducing a legislation like the RTI for your administration?

It is for the parliament to pass such a bill. Usually people can ask for any information they want. Our community is so small, we almost know each other; India is different, with 1.2 billion people. This transparency is needed, especially with such a large bureaucracy.

Tibetan internet servers have regularly been hacked, particularly the office of the Dalai Lama. What are you planning to do about it?

Yes, my computer also, the Kashag's [cabinet] also. On one side we want to do something, but on the other, there is no point doing anything because the Chinese are today able to hack the most secure servers of America, Europe or India.

We can't spend that much money protecting ourselves. Having said that, we do not want to be hacked, but at the same time, we have nothing to hide.

You say that you are ready to be hacked?

There is no way to stop this, because they are hacking the most secure systems. If they hacked the Pentagon, what can we do? At the same time, we have nothing to hide.

'Yes, there is hope for the future' 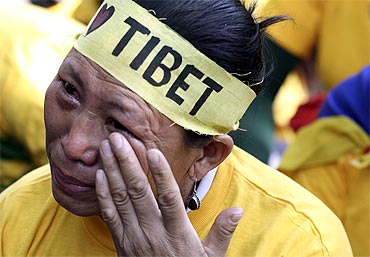 Image: A Tibetan exile wipes her tears during a protest against China
Photographs: Parivartan Sharma/Reuters

Zhu Weiqun, director of the United Front Department, who is the Chinese counterpart for negotiations with the Dalai Lama's envoys, published a hard-hitting interview on the website of China's Tibet on the occasion of the 60th anniversary of the 'Liberation' of Tibet. He quotes Mao saying in 1949: 'The earlier we enter Tibet, the better'. Does it mean that they were not in Tibet before? Is it an admission that they invaded Tibet?

Interestingly, the 17-point agreement (through which China pretends to have 'liberated' Tibet) was signed in 1951 under duress. The Tibetans had no choice but to sign it. Every year China is still celebrating May 23 as 'Liberation Day'. Their legitimacy still depends on this document.

But Article 1 says: 'Tibet shall return to the Motherland'. If Tibet was always part of China, where does it return from? Tibet was an independent entity, there were no Chinese in Tibet before 1950. Then the Chinese army entered and said that Tibet 'joined' China. In fact, they occupied Tibet. And they still celebrate this as 'Liberation'!

If China is honest and fair, it should implement that agreement to begin with, not just celebrate May 23 as 'Liberation Day'. They should restore the status and power of the Dalai Lama and the kashag.

They can't use this document to legitimise their presence in Tibet. They should also remember what Mao said: 'Wherever there will be aggression, there will be a resistance'. We have seen the resistance in 2008.

One of the obstacles in the 'negotiations' between Beijing and Dharamsala is the different interpretations of history. For Zhu Weiqun: 'The Peaceful Liberation of Tibet marked the crash of the attempt of the imperialism and a minority of Tibetan reactionary upper class to separate Tibet from the whole country'.

Can this gap in interpreting history be bridged?

In (March-April) 2008 as well as in 1987-89, Tibetans from all walks of life, farmers, nomads, educated youth, old people, everybody came out on the streets. Thousands and thousands protested against the occupation.

In exile, we have a Kalon Tripa who has a commoner background. If they are really interested to find who the reactionaries are, they may look at certain communist leaders in Tibet.

Well, from the start they did not have any legitimacy. They used sheer force to occupy Tibet. They have no legitimacy whatsoever.

How do you see the future? Any hope?

Yes, there is hope. That is why I left Harvard University, my job and even my family has been left behind for the time being. I work in Dharamsala for less than $400 a month. Of course, there is hope and we are committed to take this struggle forward for how ever long it will take. That is the commitment of the youth. That is the change. That is my mandate.