Sign in  |  Create a Rediffmail account
Rediff.com  » News » 'Indians are very intelligent, but we are not focussed'

'Indians are very intelligent, but we are not focussed' 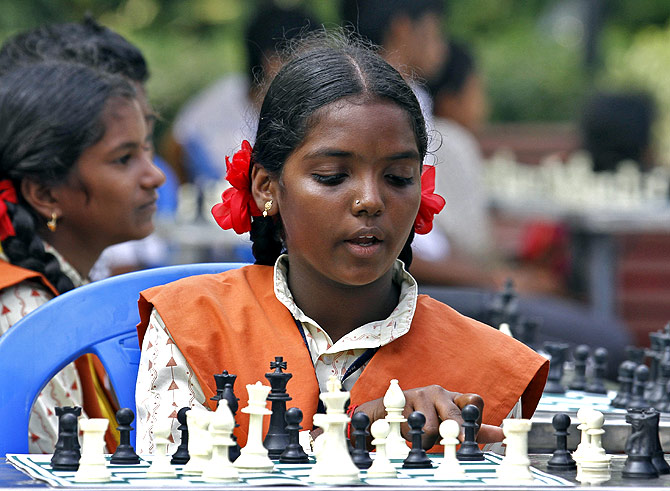 Image: A schoolgirl plays chess in a park in Chennai. Photograph used for representational purposes only.
Photographs: Babu/Reuters

'If we get focused, nobody will be able to beat us,' says Dr Prathap C Reddy, founder, Apollo Hospitals, in our special series where well-known Indians speak about the India they love.

What I love the most about India are its people. The people of India have a conscience.

When you go from the extreme north to the south, you will see that our culture, habits and even our looks are different, but there is something that binds us all, and that according to me is the beauty of India.

Indians are as intelligent or even more intelligent than any other race in the world, but we are not as focussed as say, the Japanese or the Chinese.

They single-mindedly go after things while we get diverted very easily. If we get focused, nobody will be able to beat us.

I remember being at a party at NASA when Neil Armstrong landed on the moon as my boss was the cardiologist at NASA.

I was told that 40 per cent of NASA employees were Asians and out of that 90 were Indians. This was way back in the 1960s. I feel we didn't exploit the worth of our people.

When in India, we have a slightly laid-back attitude which should disappear. The shortcoming is that we accept nonsense without protesting.

Look at the way we have accepted corruption.

We should have condemned corruption from the beginning, but we accepted it as a part of life.

Toleration of wrong things is our biggest folly.

I am sure from 2014, things will turn better and corruption will not be accepted by people.

Once corruption disappears from our society, people would love to participate in nation building and doing what they love to do.

I am confident in the years to come, India will bounce back.

All good thinking people should get together and form a Team India.

The youth of India should join hands with them to make India a better place.

The youth should believe that we can do it. Only then, we will do it.

Belief in 'can do it' is very important.

The biggest challenge the entire world including India faces is the threat caused by non-communicable diseases, NCD.

WHO says NCDs kill more than 36 million people each year and nearly 80 per cent of NCD deaths -- 29 million -- occur in low- and middle-income countries.

More than nine million of all deaths attributed to NCDs occur before the age of 60; 90 per cent of these 'premature' deaths occurred in low-and middle-income countries.

These four groups of diseases account for around 80 per cent of all NCD deaths.

Last year, Apollo itself saw 1,000 people below the 30s with heart problems and there are so many who do not even reach us.

I see this as the biggest threat India has, and because of this, the national economy also will collapse.

In 2011, Narendra Modi sent me a book, The Pride of India. There were 30 pages on healthcare in it.

It was written in the book how surgeries were done 3,000 years ago in India. This is the great strength that we have.

Unfortunately, we lost our old strength.

My vision for India is to bring back the inherent immense strength we have. I urge Indians not to look down on us, but look up and say, 'Yes, we can.'

Dr Prathap C Reddy is the founder chairman of the Apollo Hospital Group. He has been awarded the Padma Bhushan and Padma Vibhushan. He spoke to Shobha Warrier.