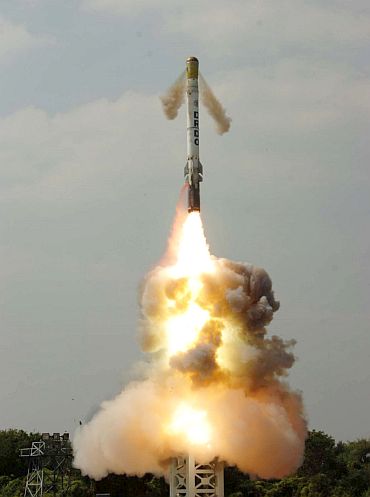 The surface-to-surface missile took off from an underground silo at the launch complex-3 in the ITR at about 1428 hours, defence sources said.

It was the second developmental trial of the missile. The first test of the missile was successfully conducted on November 12, 2008 from the same base, they said.

The sophisticated missile combines simplicity of operation with low maintenance. It can be easily handled, transported and stored within the canister for longer shelf life, he said. The high manoeuvrability of the missile makes it less vulnerable to available anti-missile defence systems.

Shourya, which can carry a one-tonne nuclear and conventional warhead over 750 kilometers, is powered by 2-stage solid fuel.

"We have designed the Shourya missile in such a manner that it can be launched from under water as easily as from land. The gas-filled canister that houses the missile fits easily into a submarine. The underwater leg of the nuclear trial needs to be totally reliable and needs a state-of-the-art missile," said a defence scientist associated with the project.

As a safety measure, prior to the test, Balasore district administration had temporarily evacuated 400 families residing within 2 km radius of the launch pad to nearby shelter camps early Saturday morning.