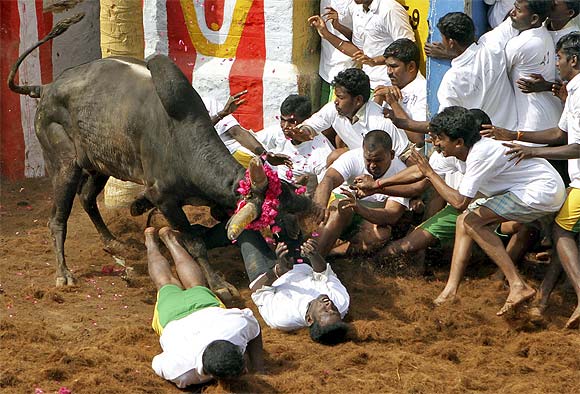 Image: Villagers are pinned down by a bull during Jallikattu on the outskirts of Madurai
Photographs: Babu/Reuters Ganesh Nadar in Alanganallur

Rediff.com's Ganesh Nadar shares his experience after witnessing Tamil Nadu's annual bull-taming festival, which is celebrated as part of the harvest festival of Pongal.

Rural Tamil Nadu's popular and dangerous game, Jallikattu, was celebrated with much much fanfare this year. And in Alanganallur, where the sport is the biggest in the state, with over 400 bulls taking part and just 17 injuries, and luckily no deaths, this year's festival went off rather well.

The area was secured with double barricades, as in the past the bulls have been known to run into the the audience and injuring many.

Rules for the games, which started at 9.30 am and went on till 4 pm, had been changed a little. Earlier, the bulls had to be captured but now if a contestant is able to hold on to the bull, from the entry point to an area about hundred feet away, he is declared winner. 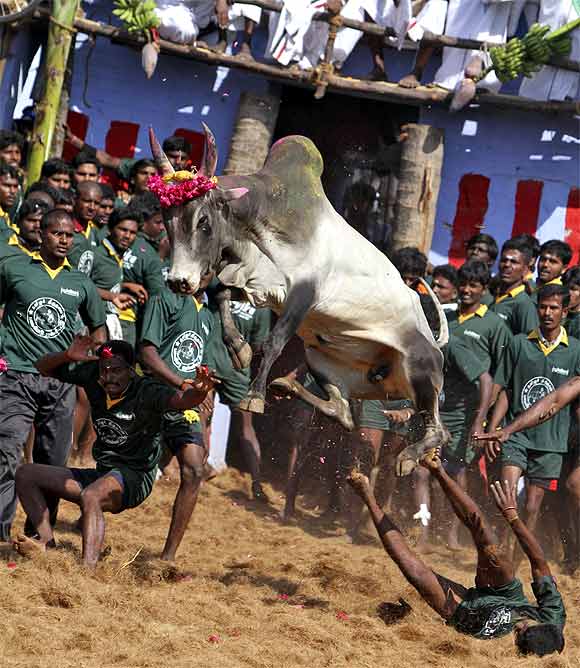 Image: Villagers try to control a bull during Jallikattu on the outskirts of Madurai
Photographs: Babu/Reuters

While over a hundred youngsters stood around the field, only a few of them attempted to cling to the bull as it came in to the enclosed area. While some caught its hump and tried to ride it, the more adventurous ones tried to cling on the bull's neck. However, most of them were tossed aside by the bull's mighty toss of the head.

The injured were assisted and dragged to safety by the others. Only a few were attacked by the bulls after they were tossed into the air, sometimes even after the men had fallen down. After the encounter with the men the bulls turned furious, and raced hard inside the enclosure, before being caught by their owners and taken home.

Interestingly, two bulls were disqualified because the authorities found alcohol in their blood.

Huge crowds kept pouring in to watch the game. There was a big crowd, which kept changing. People who came early left and made way for people who came in late. 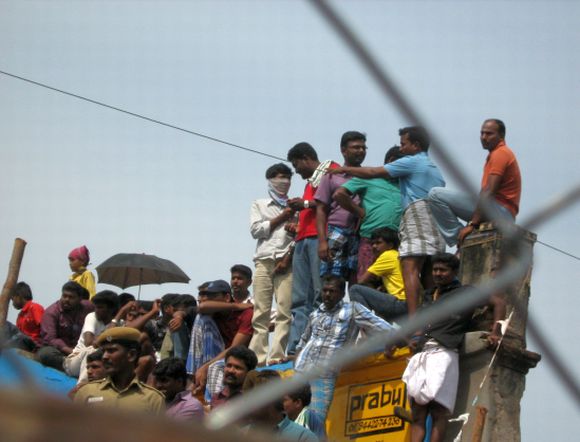 Special buses were arranged from Madurai which brought in loads of spectators every hour, even as late as 2 pm.

Food sellers had a field day, as they did brisk business selling lemon rice, curd rice, ice cream and cold drinks. Water pouches were sold for Re 1. 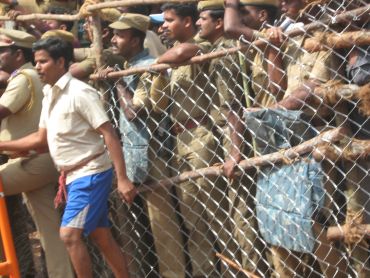 There was heavy police presence at the venue, with around 1,400 policemen deployed to maintain law and order.

However, the cops were at their worst behaviour. They did not hesitate to beat up spectators even at the slightest provocation.

All cars to the venue were stopped by the police outside the village. People who had come to watch the game had to walk a mile to get to the arena.

As the wine shop in Alanganallur was closed, liquor shops on the way to the venue were very crowded. Many in the audience were drunk. Pongal festival, after all, is a period of merriment for many. 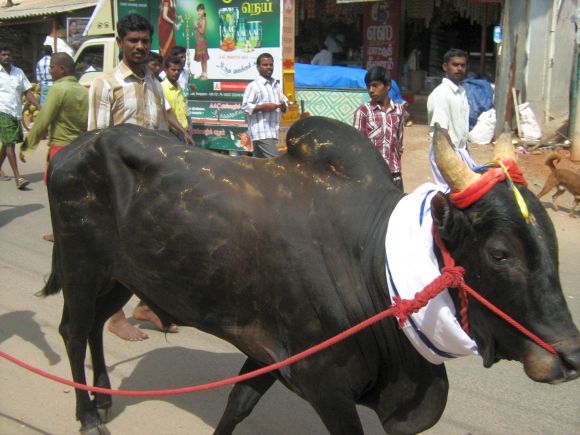 Though a bull was released on the field almost every minute, only one in 10 bulls was being caught. While releasing the bulls, the announcer informed the audience about the prize to be won on riding the bull. While for some bulls the prizes to be won were cheap -- the winner received a utensil or a t-shirt -- Universal Mobile was offering a mobile phone to the winners who rode select bulls.

The rewards for riding fierce bulls were pricy, however. Winners were offered anything from gold coins and gold rings to 10 sovereign gold chains worth over Rs 2 lakh. A fortune in the countryside!

The youngsters taking part were aged mostly between 18 and 25, but none of them looked even remotely scared. When they fell down they got up and went back to ride the next bull. Only when their injuries became serious did they leave the field. 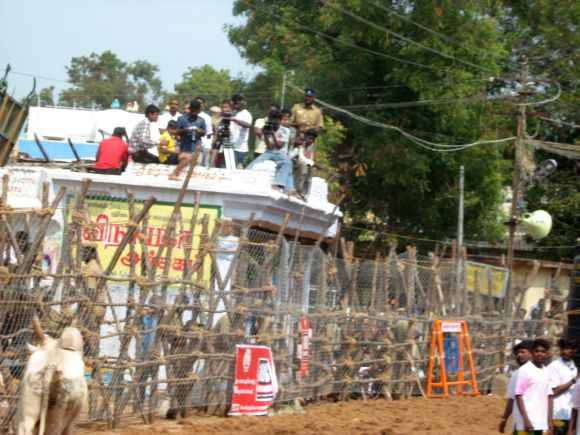 Over 100 foreigners had come to watch the bull-taming event and a special gallery was created for them. While they were treated very well, the cops were harsh toward the local people.

After the event the bulls were taken away by their trainers. They had run for a minute and now they could rest for the whole year, only to run for another minute next year.