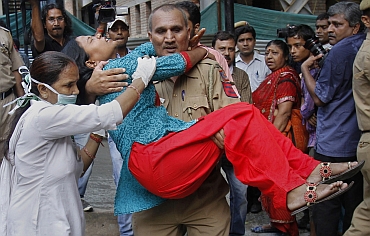 Image: A nurse tries to assist as a policeman carries a woman, who was injured by a blast outside the high court
Photographs: Reuters
As terror struck outside the Delhi high court, a man who lost one of his legs was seen trying to get away from the site as limbs and pieces of flesh were strewn on the ground along with shards of glass.

Lawyers and litigants with blood soaked clothes ran helter-skelter as soon as the blast took place.

Stunned by the deadly blast, a middle-aged woman who had come to secure bail for her relative could not speak while litigant Rahul Gupta who was barely 10 metres away from the site had problems hearing.

Gupta, who was at the reception counter near the blast site, said he cannot hear after the deafening blast.

"I heard a loud noise and smoke coming out following by cries of people," said Narendra Kumar Singh, a guard at a construction site outside the court.

'Loud noise was followed by cries of people' 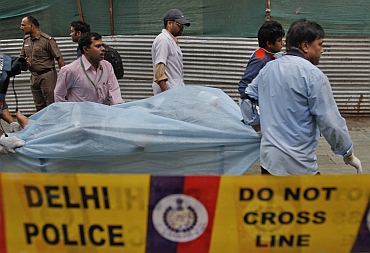 Image: Paramedics rush a covered man, who was injured by a bomb blast outside the high court in New Delhi, to a hospital for treatment
Photographs: Reuters
The Gate No 5, where the blast took place, was crowded with 100 to 200 people waiting in a queue to get entry passes. There were several lawyers at the spot.

A woman lawyer, who refused to identify herself, said she heard a loud noise while she was coming towards the court.

"By the time I could come police had cordoned off the roads and people were being taken to hospitals. I parked my car and walked to the gate. I am really terrified and hope none of my friends have been injured in the incident."

Another lawyer said the gate where the blast happened is one of the most crowded gates at the high court premises and it was the "peak hour" at the court.

"This is the time when hundreds of people come here for making passes to enter the high court. I was 200 metres away when the blast took place," he said.

'What happened was quite devastating' 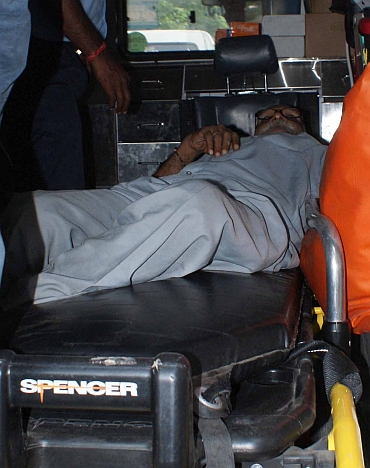 Image: Several litigants were injured in the blast
Photographs: Chaman Gupta
"I heard a deafening sound and what happened later was quite devastating," Ajay Aggarwal, a lawyer and an eyewitness, said.

R P Luthra, another lawyer, who helped police personnel take out the injured from the spot, termed the scene as "horrific". "I was issuing passes to my client to enable them to watch court proceedings when I heard the blast," Luthra said, adding "The Delhi police personnel did a good job in rushing the injured to hospitals."

As the blast took place near a counter where passes are issued for senior citizens, a lot of spectacles were seen strewn around.

The pass counter was badly damaged in the blast.