Sign in  |  Create a Rediffmail account
Rediff.com  » News » 'I was scared for his safety, but the army was his life'

'I was scared for his safety, but the army was his life' 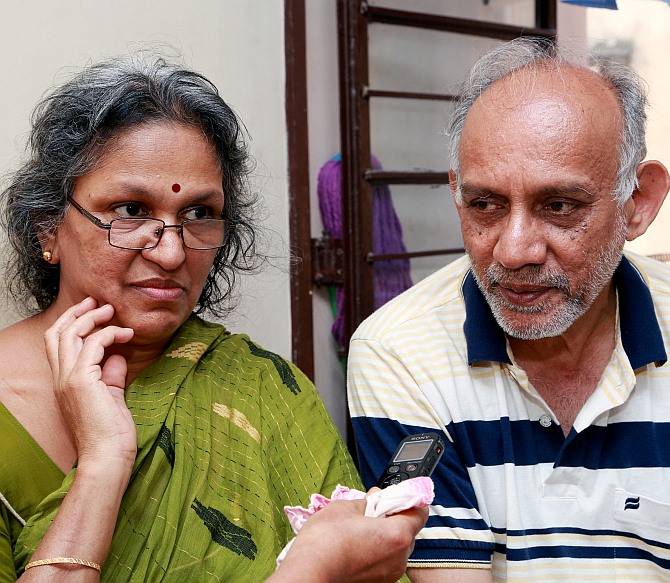 'As a mother, I wanted him to be near me and not live where danger lay.'

'My son was so sure about where he wanted to be, and he was so happy to wear the army uniform and work for the country'

Before any major operation, he would tell me, "Please pray for me, Amma, but don't ask me why"'

Shobha Warrier/Rediff.com meets the parents of Major Mukund Varadarajan who was killed during an operation against terrorists in Jammu and Kashmir on April 25, 2014, and who was awarded the Ashok Chakra, India's highest award for courage in peacetime, for his supreme sacrifice.

Early in the morning, his father Varadarajan sent him birthday greetings on (the mobile messaging application) WhatsApp, to which there was an immediate thank you response where he said he'd call in the evening. Which he did. And then, as always, he spoke a little to his father and a lot to his mother.

But one of the messages he sent his father was a secret.

"He told me he was going to take leave for ten days and come home in the first week of May. He wanted me to keep it as a secret from his wife Indu. He wanted to surprise her."

'He was a brave, courageous child who led from the front even at a small age' 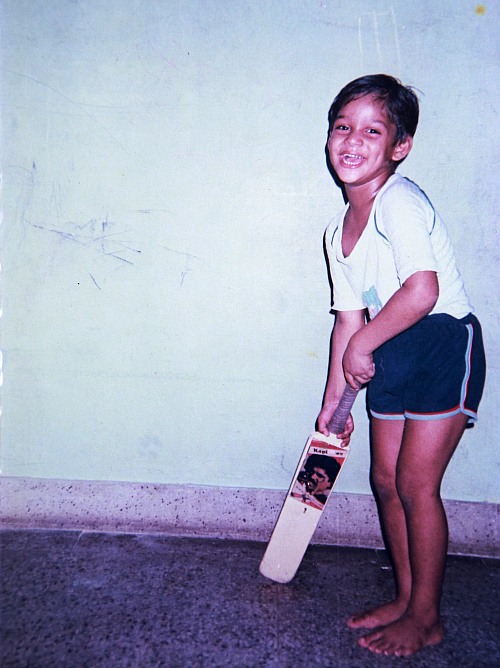 Naughty, hyperactive, friendly, always the leader -- these are some of the adjectives used to describe the child Mukund.

I would ask him why he made them run errands for him to which he would smile and say, 'They are my friends; when they would do it without a word of complaint, why do you make such a big fuss?'"

Not a single day passed without his mother getting at least one complaint about Mukund from the other mothers.

"I lost count of the window panes I have paid for! But he was a brave, courageous child who led from the front even at that age."

'I don't think my decision to support him was wrong' 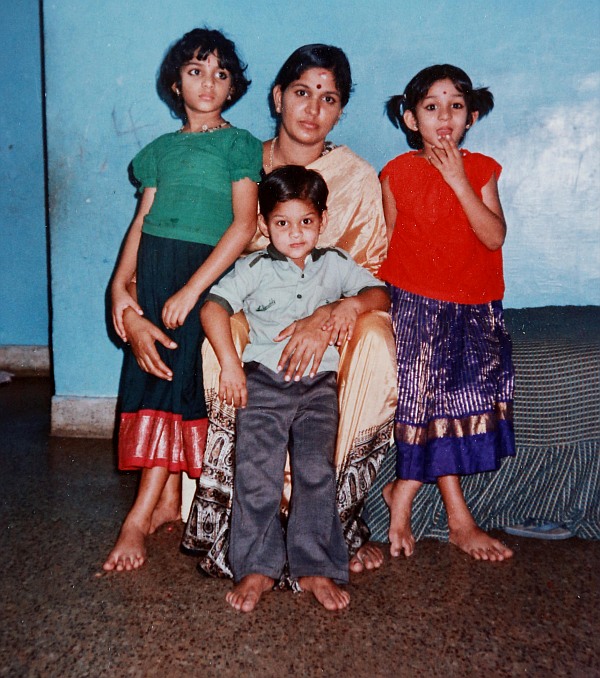 Image: A childhood photograph of Major Mukund Varadarajan with his mother and sisters.
Shobha Warrier/Rediff.com

Varadarajan, Major Mukund's father, worked in a public sector bank, but many of his cousins were in the Indian Air Force. He too wanted to join the IAF like his cousins, but was dissuaded from doing so by his parents because he was their only son.

"When my son expressed the same desire I had always harboured, I couldn't say no to him. I supported him wholeheartedly."

"Even after having lost my only son, I don't think my decision to support him was wrong," says Varadarajan.

His mother Geetha was not at all happy with Mukund's decision. She told him he was her only son and should be with her.

But nobody could make Mukund change his mind. 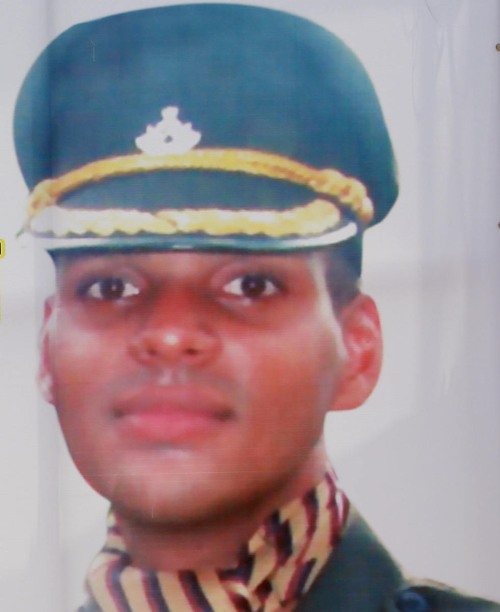 As Mukund was so passionate about joining the army, Varadarajan thought of admitting him to a Sainik School. But he had to abandon the idea when he was transferred to Alappuzha from Thiruvananthapuram.

After school, Mukund got a bachelor's degree, and then a master's in mass communication and journalism.

His father thought he had forgotten about the army. But Mukund surprised his parents by taking a Short Service Commission after spending a month working in a call centre.

He passed out of the Officers Training Academy with high honours in 2004.

"Everybody asked me if I felt proud seeing him in uniform," his mother recalls. "I didn't have any such feeling then. I agreed only because he was very adamant. Somehow, I was scared of losing my son."

"As a mother, I wanted him to be near me and not live where danger lay. My son was so sure about where he wanted to be, and he was so happy to wear the army uniform and work for the country."

'The army was his life' 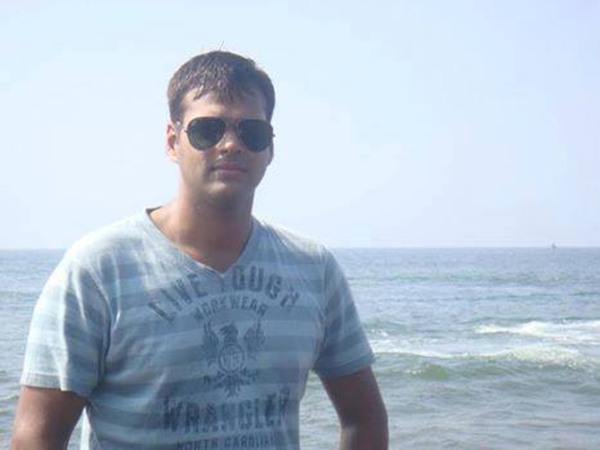 What surprised his mother most was Mukund's posting at Mhow as an army instructor.

"I teased him about this because he was never the sort that showed any interest in studying. Just before his exams, he would sit on a swing and have his elder sisters read the lessons out to him. That was how he prepared for his exams, which he would just about pass."

"So, I said, 'Mukund, you are teaching others in the army!' He replied, 'Amma, don't talk to me about the past. I am happy and proud to be here'."

Her son, his mother recalls, became very close to the family only after joining the army and getting posted to Jammu and Kashmir.

"Till then, though he was a loving child, but he had no time for his family or parents. He used to hang out with his friends all the time. As a child, a teenager, and even later on, we hardly caught a glimpse of him; he was either playing outside or hanging out with his friends. He'd come home only to eat."

Once he joined the army, he would call home every week and talk to his mother for hours.

"I wanted to know whether army life was like what we see in films. I wanted him to tell me about his life in the army. But he would say, 'You don't need to know all of that. I know you want to tell your neighbours everything. There's no way I am going to let you do that.'

He would also say, 'I miss all of you. It is only now that I understand the value of family'. Whenever he spoke about missing his family, I would immediately tell him that this was why I didn't want him to go out there. But he never liked me saying that. The army was his life."

'Now, whenever I try to sleep, I only see his face' 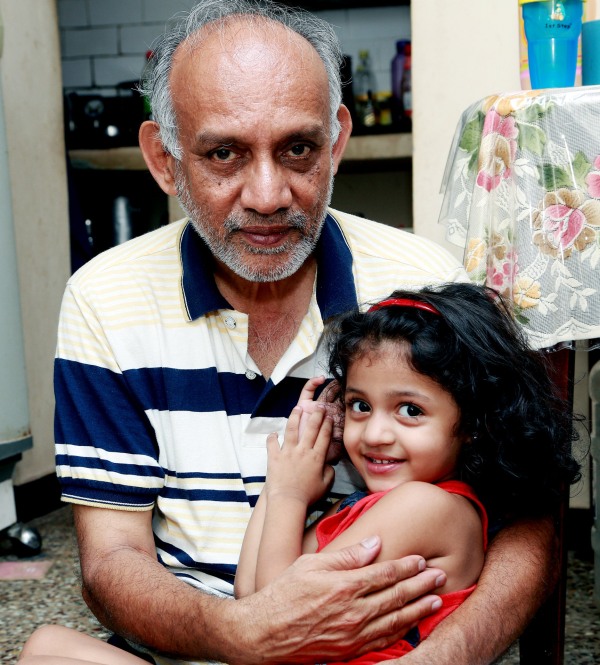 Whenever his mother complained about not being able to see him regularly, he would say, 'At least I come home a couple of times a year. But most soldiers cannot go home even once a year. Think of those mothers. You are lucky.'

Every time he called, he had lots of advice for his parents, especially his father.

"He used to tell us to take care of our health. He was always worried about our health. When we went to Sabarimala together, he walked behind me as we climbed the hill, pushing me up. On the way down, he walked up front so that I could hold on to him."

"He was such a caring and loving boy. Now, whenever I try to sleep, I only see his face... I have not been able to sleep at all," says his very emotional father.

The last time his mother spoke to him was on his birthday. "He told me that he looked forward to eating my crispy dosas. Any time of the day was dosa time for him. He loved food."

"As he grew up in Kerala, Malayalee food like puttu-kadala and idiyappam were among his favourites. Oh, and sweets! He had such a sweet tooth that he would ask for sweets after every meal."

When he was a student at the Madras Christian College, Mukund used to bring Indu, one of his classmates, home quite regularly. He introduced her as his friend. When his mother smelt something that went beyond friendship, he insisted that she was only a friend.

"And then suddenly one day, he told us that he was going to marry her. Though she was a Christian and we were Tamil Brahmins, he knew how to convince us. I could never say no to my son."

'Mukund's last words were, "Please take care of my parents, wife, and child"' 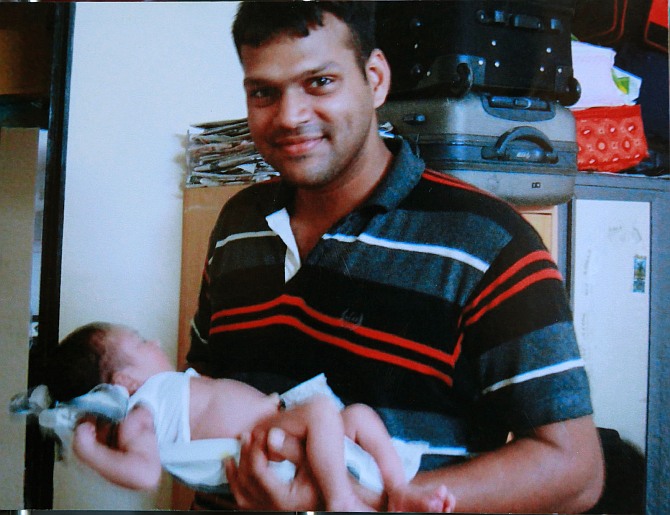 Mukund has a three-year-old daughter Arsheya, but he never got to spend much time with her.

"He spent two years in Lebanon on a United Nations mission and then another six months in Kashmir. The poor lad could spend just six months with his daughter," his mother says.

"So many people in my husband's family are in the defence services. As most of them had stayed safe, I thought my son too would come through. Before any major operation, he would tell me, 'Please pray for me, Amma, but don't ask me why!' And I would pray for him. But this time, he didn't ask me to pray..."

"People tell me to be proud of our son. I can't feel that way at all. I am a mother who has lost her only son, and nobody can replace a mother's loss."

The officer who accompanied Major Mukund Varadarajan's body home told his parents, 'Mukund's last words were, "Please take care of my parents, wife, and child" -- words that will always echo in his parents' ears.