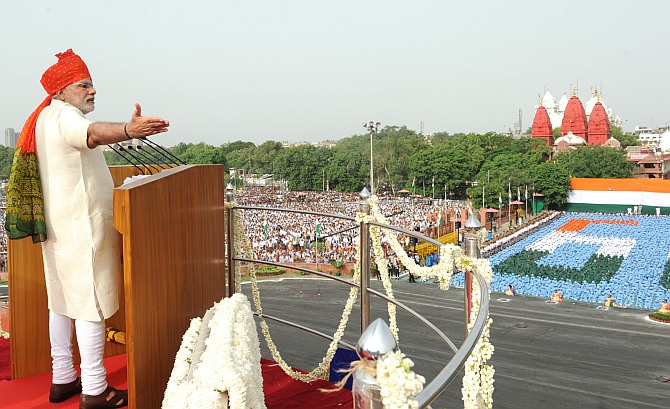 Prime Minister Narendra Modi on Friday declared that he would like to run the country on the basis of consensus and not on majority in Parliament and called for a 10-year moratorium on caste and communal violence.

Addressing the nation from the ramparts of historic Red Fort for the first time, he also asked the misguided youth who have taken to terrorism and naxalism to shed their guns and adopt the path of peace and development.

Less than three months after taking over as Prime Minister, Modi unveiled a roadmap for his government, announcing a financial inclusion scheme for the poor to open bank account with built-in insurance, development of model villages by MPs and launching of a scheme for elimination of open defecation.

He asked corporates to work with the government as part of their social responsibility to install toilets, including separate ones for girl students, in all schools by next Independence Day.

Did you hear PM Modi speak at the Red Fort? Rate his speech:

'We have fought enough, killed enough' 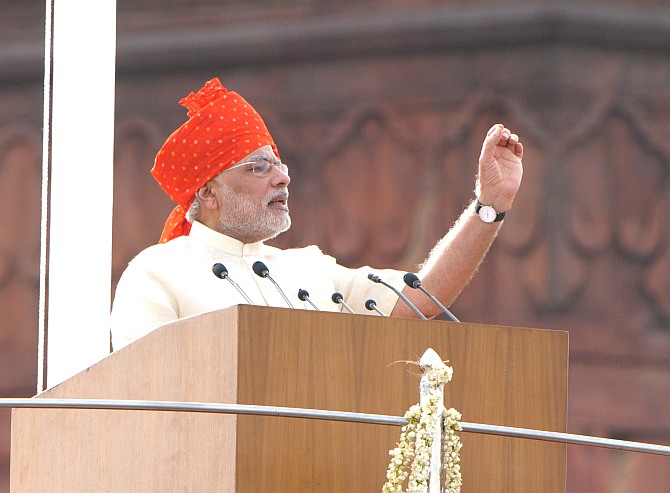 In his 65-minute extempore speech in Hindi without any bullet-proof shield, he also announced that the Planning Commission, a socialist-era vestige, would be soon replaced with a new institution keeping in view the economic changes internally and globally.

Asserting that he was speaking not as the Prime Minister but as "prime servant", Modi made a special mention of the services rendered by his predecessors and former governments for the country's development.

Seeking the cooperation of all political parties and pledging to take their help, he referred to the Parliament session that concluded on Thursday, saying "it was a reflection of our thinking and intention to move forward not on the basis of majority but on the basis of strong foundation of consensus.

"You must have seen that by taking all parties, including opposition, along we achieved unprecedented success. The credit for it does not go just to the Prime Minister or the government but also to opposition, its leaders and each of its MPs. I salute all MPs and leaders of parties with whose help we ended this first session with success."

In an apparent reference to recent incidents in some parts of the country, the prime minister said communalism and casteism are an obstacle in the country's progress.

"We see violence on the basis of religion and caste. How long? Who is benefiting? We have fought enough, killed enough. If you look back, you will find that nobody has gained anything.... It took us to even partition.

'There should be a 10-year moratorium on violence' 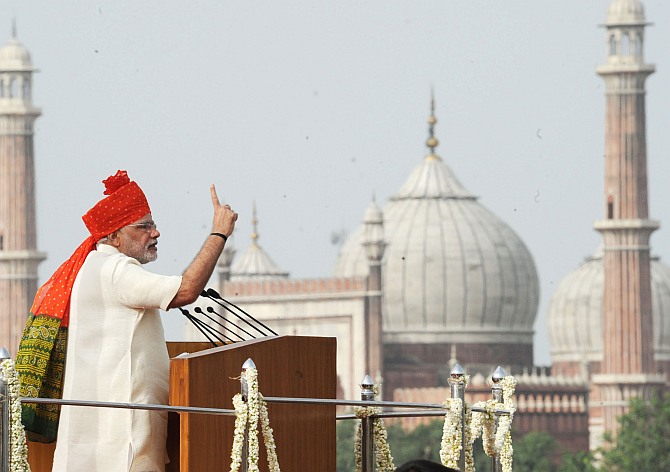 "I appeal that for the sake of country's progress, there should be a 10-year moratorium on violence, at least for once, so that we are free from these ills. We should have peace, unity and harmony. Please believe my word, if we give up the path of violence and adopt the path of brotherhood, we will make progress," he said.

Referring to terrorism and Naxalism, Modi again wondered how long the violence would continue. "You will get nothing," he told the misguided youth.

He cited the example of Nepal where Maoists have shunned the path of violence after a decade-long armed struggle and joined the political mainstream and nation-building.

"They (Maoists) have given up arms and are now waiting for a new Constitution. It is an example of inspiration for the misguided youth.. It is high time that misguided youth renounce violence and take the path of peace," said Modi who recently visited Nepal. Expressing serious concern over rape incidents, the Prime Minister said, "our heads hang in shame when we hear about such incidents" and attacked politicians who become "psychologists" by trying to "analyse" reasons for the crime .

"In every home, parents ask daughters many questions as to where she is going and what she is doing. But do they ask the same thing to their sons? Rapists are also somebody's sons. He also has parents. If only restrictions are also put on sons, there will be no rapists, no Maoists and no terrorists.

"Law will do its work but the society has also to contribute," he said, adding it is the social duty of parents.

Modi said every terrorist and Maoist is somebody's son who is bent on spilling blood.

He also expressed concern over the skewed sex ratio and deplored the practice of foeticide and the attitude of doctors to make money by doing so.

'I have started demolishing these fiefdoms' 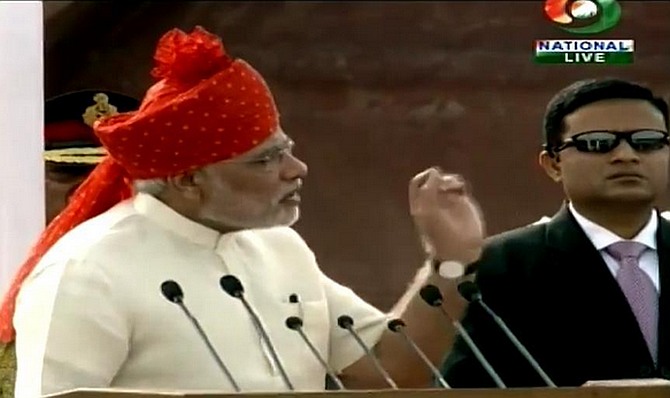 Calling himself an "outsider" to Delhi, the former Gujarat Chief Minister said in two months of coming to power, he has got an "insider view" in the functioning of the government.

Making it clear that his comments should be not be seen from a political prism, Modi said he was "surprised" to see that "within a government, there were dozens of governments."

"People used to consider departments as their personal fiefdom. I saw there was disintegration and fights between departments. These fights landed up in the Supreme Court. How can you go forward in this situation?

"I have started demolishing these walls to ensure that the government is one entity. The government has to move with one idea, one direction and one view," he said.

Referring to media reports about government employees reporting to work on time since his government came to power, the Prime Minister said he should have been happy but he felt pained that such things were making news.

"If this makes news, it shows how much we have fallen. How have governments run in the past? The country cannot be run like this. The momentum has to be raised," he said, adding there is enough competence from peon to Cabinet Secretary which he wants to rekindle.

"We have to speed up progress and we can do it," Modi said.

Modi to the world: 'Come, Make in India' 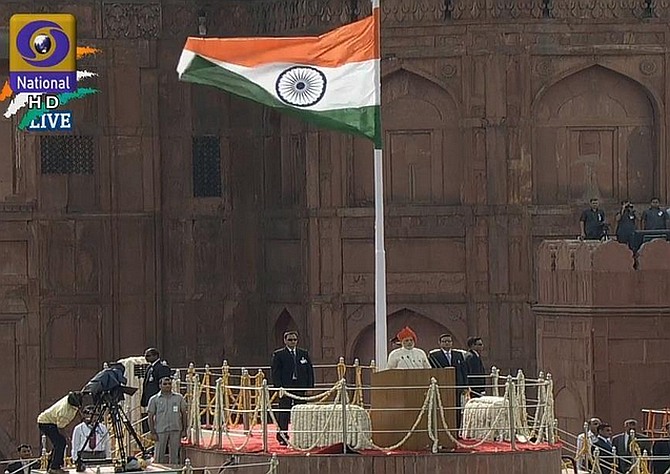 As part of government's financial inclusion, the Prime Minister announced that the poor people would be enabled to open bank accounts with a debit card and insurance of Rs 1 lakh.

He also unveiled his thinking on boosting economy by saying India should become a manufacturing power with a huge resource of digitally-capable and skilled youth.

"Come -- Make in India," he said while inviting global companies to enter the manufacturing sector in this country.

Modi said 'Made in India' brand products should flood the global markets.

Citing the high imports of electronic goods in the country, India has the talent to become an exporting nation in this sector. "There should be no compromise on quality... 'Zero defect' in manufacturing and 'zero effect' on environment should be the motto."

He recalled how IT revolution changed India's image from a "land of snake charmers and black magic' and said that digital India is not just for the upper strata of the society but for the poor as well.

Modi announced a scheme 'MP Model Village Scheme' under which each Member of Parliament will adopt one village and develop it by 2016, equipping it with all facilities like electricity, water and roads.

"By 2019, before you go to polls, at least five model villages would have been made," he said, adding he would unveil the complete blueprint of the scheme on October 11, the birth anniversary of Jai Prakash Narayan.