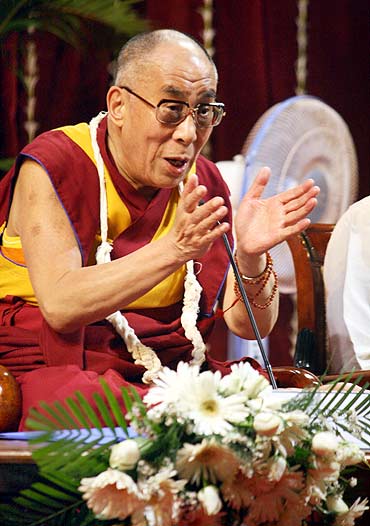 During an interaction with Mumbai students, the Tibetan spiritual leader talks about Marxism, the changing faces of China, world peace and more, reports N Ganesh.

In a statement that raised quite a few eyebrows, Tibetan spiritual leader the Dalai Lama said he has been influenced by the teachings of Marxism. He, however, went on to add that he is a Marxist only when it comes to the equal distribution of wealth among all.

The Dalai Lama was addressing a gathering of students and teachers at Mumbai University's Sir Cowasji Jehangir Hall in Mumbai on Friday. The Tibetan spiritual head was replying to a question from a student on capitalism and social work in the aftermath of recessionwhen he spoke on the subject of Marxism.

The Dalai Lama said he was influenced by the teachings of Marxism when he was a student in Peking (currently Beijing) in 1955. "I'm a Marxist as far as equal distribution of wealth is concerned," he said.

'China is no longer a communist or a socialist country' 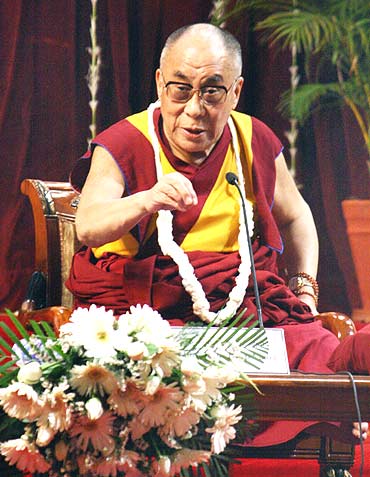 Photographs: Hitesh Harisinghani/Rediff.com
The remarks are significant as Karl Marx is learnt to have played an important role in the development of communism. Tibetans including the Dalai Lama have been at loggerheads with China, a communist country that has trampled upon the freedom of Tibetans.

While acknowledging Marxism as important, he however used the opportunity to slam China. The Dalai Lama said China has moved away from Marxist principles. "China now is no longer a communist or a socialist country, it is a capitalist-communist country," he said.

The Buddhist monk also took a dig at Indian communists when he said, "I have not seen it, but I have been told that communists here are leading a very gorgeous lifestyle."

'India is the guru and Tibet its chela' 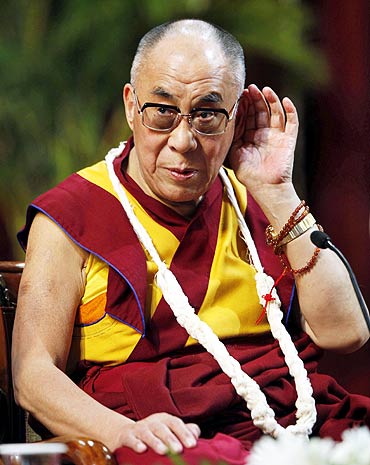 Photographs: Danish Siddiqui/Reuters
The Dalai Lama batted for India saying that the Indian Constitution is based on secularism and that it has taught many things to a lot of people.

"India is a peaceful country and I usually describe India as our guru and we are their chelas. We are real good chelas as we have preserved the ancient teachings of India for thousands of years," he said.

'India should do away with caste system, dowry' 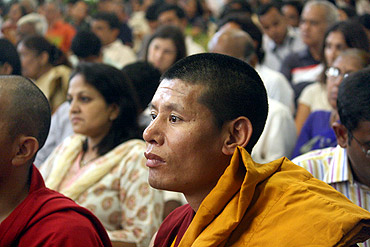 He, however, cautioned saying that old practices like caste system, discrimination, dowry should be removed from the Indian society and that the youth should take the lead in changing these "outdated practices". 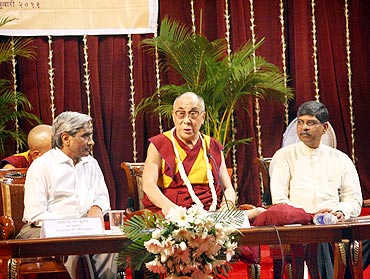 Photographs: Hitesh Harisinghani/Rediff.com
Propagating world peace, the Buddhist leader said in past years there were fears of a nuclear holocaust. However, things have changed as people have become more vocal against war. For instance, he said many Americans came on the streets in protest against the Iraq war. He also went on to add that China is different from what it was 30 years ago, hinting that China has softened up its aggressiveness.

The Dalai, however, added that peace should come from within and he said education alone could not bring inner peace. "Some troublemakers are well-educated, they use education for destructive purposes. The purpose of education is to reduce the gap between theory and reality," he said.
More