Sign in  |  Create a Rediffmail account
Rediff.com  » News » Trials of a dieting neta! Gupshup from the Dilli Durbar

Trials of a dieting neta! Gupshup from the Dilli Durbar 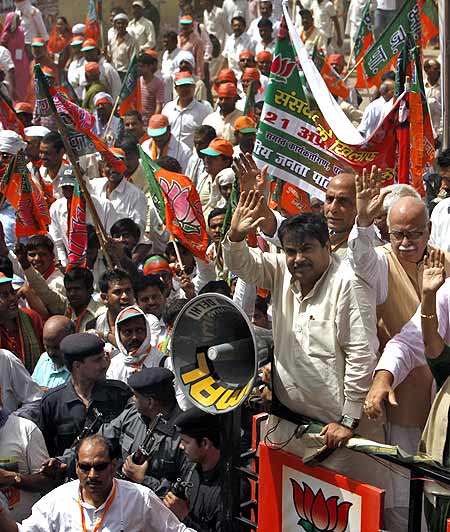 Chhole bhaturas instead of cumcumber sandwiches -- diets take a tumble in the tough UP campaign;

The star of the Congress Parivar and no it's not Rahul;

UP fails to lure Didi;

The Desi Boy who reads the The New York Times after campaigning... Gupshup from the Dilli Darbar.

Campaigning in Uttar Pradesh, BJP President Nitin Gadkari is unable to maintain his strict diet schedule that his doctors, trainers and family members have tried to enforce.

But hectic electioneering has prompted Gadkari to skip unappetising cucumber sandwiches and sneaking in some dahi bhalla, bhelpuri, potato wafers and other namkeenS on the campaign trail.

Gadkari used to weigh more than 127 kgs and suffered from type-two diabetes, high cholesterol and blood pressure. The surgery reduced his stomach capacity by 90 per cent. But the stomach reduction has not lessened his craving for food.

He confesses of actually dreaming about the goodies he has had to give up from the best eateries in Nagpur and Delhi. Obviously, he is in for a rude shock when such delectable dreams come to an end and he is confronted by his doctor's advice to reduce some more weight.

The battle with the weighing scale is equally hard as the battle for the states, isn't it Mr Gadkari? 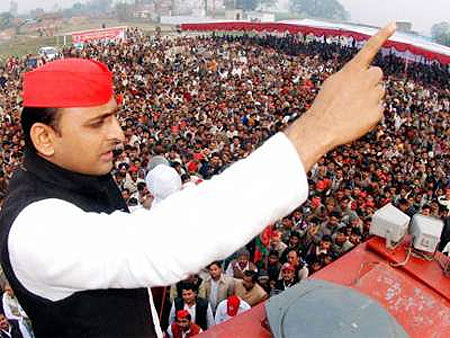 Image: Akhilesh Yadav addresses a campaign rally in UP

Akhilesh Yadav is busy projecting himself as the young face of the Samajwadi Party in Uttar Pradesh.

He is careful about sporting his party's red cap, speaking in Hindi and addressing influential locals on a first name basis in almost all constituencies.

Once he is back in his aircraft, out comes the Blackberry, The New York Times and conversations in English over the cellphone.

Mulayam Singh Yadav's bada beta has perfected the art of presenting himself in Bharat as well as India. His easy manners, accessibility and warmth has been appreciated beyond Samajwadi Party circles.

What UP thinks of this English-turned-Desi-Baba, let's wait and watch! 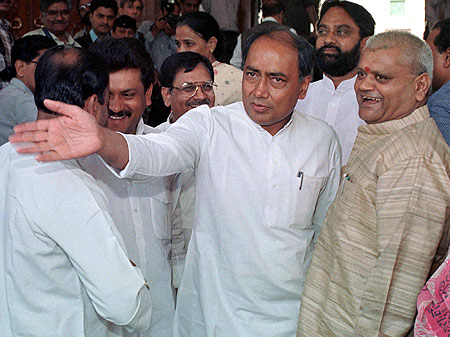 Image: Digvijay Singh, the former Madhya Pradesh chief minister, is one of the most powerful members of the Congress party
Photographs: Reuters

Congress General Secretary in charge of Uttar Pradesh Digvijay Singh has become a star of sorts within the Congress Parivar.

The former Madhya Pradesh chief minister, who is considered close to Rahul Gandhi, was recently on a visit to Hyderabad. The entire city was filled with posters, banners, hoardings etc welcoming Digvijay Singh.

The buzz in the Congress is that Digvijay Singh's proximity to Rahul would result in Captain Amarinder Singh and Harish Rawat becoming chief ministers of Punjab and Uttarakhand respectively if the Congress wins the election in both states.

Will Digvijay Singh really have the last laugh in the Congress Parivar?

For Didi, UP can wait 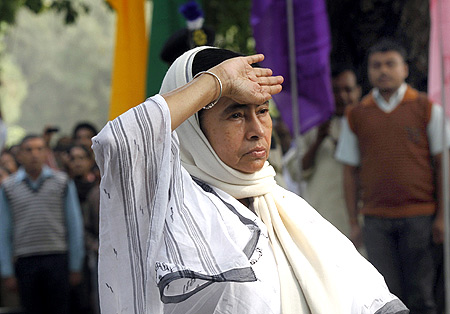 There is no sign of Mamata Banerjee in Uttar Pradesh. Candidates who bagged a Trinamool Congress ticket are now losing hope of the Bengal chief minister pitching in for them.

Union Railways Minister and senior Trinamool leader Dinesh Trivedi too has made himself unavailable for the UP campaign. Trivedi has cited his preoccupation with the Railway Budget as the reason.

The Trinamool's UP campaign is run by Sultan Ahmad, the Union minister of state for tourism.

Trivedi has been pushing many innovative ideas in the coming Railway Budget. He wants to hire separate public relations officers to ensure better media coverage for the Indian Railways.

As far as Didi is concerned, UP can wait! Or so thinks the Trinamool Congress. 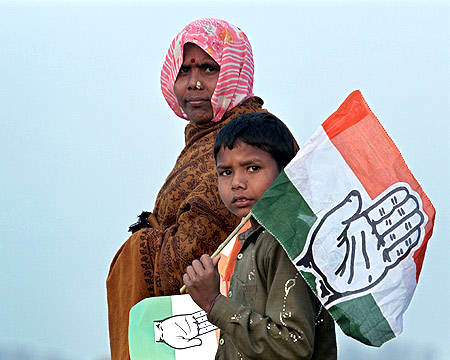 Image: A woman and a child leave after listening to Rahul Gandhi at a campaign rally in Hardoi, UP
Photographs: Adnan Abidi/Reuters

Union Coal Minister Sriprakash Jaiswal fancies himself as the next chief minister of Uttar Pradesh.

Jaiswal created a flutter of sorts when he openly claimed that the next government in UP would be run by Rahul Gandhi through 'remote control.'

Privately, the minister, who hosted a lavish meal for the Delhi media recently, identified himself as RG's 'remote control.'

At the lunch, when the news cameras focused on him, Jaiswal predicted that the Congress would get 200 assembly seats, but once the conversation became 'off the record,' the minister pegged the party's prospects at 100 seats.

With men like Jaiswal, Salman Khurshid and Beni Prasad Verma (all Union ministers from UP), some Congressmen do not give the Rahul-led Congress coming anywhere closer to the 100 seat mark!

It's no wonder that Rahul has set out on this battle on his own!