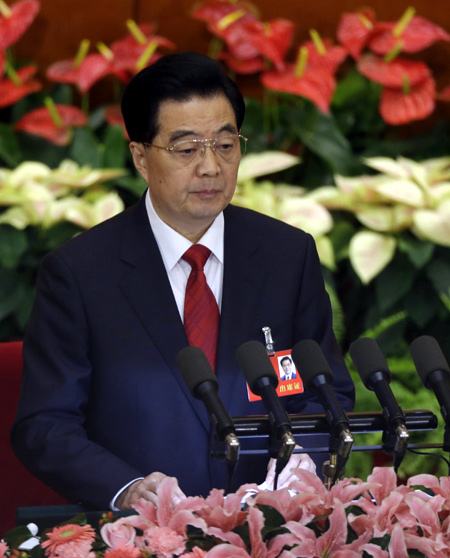 Image: Chinese President Hu Jintao delivers a speech during the opening ceremony of the 18th National Congress of the Communist Party of China at the Great Hall of the People in Beijing
Photographs: Jason Lee/Reuters D S Rajan

A preliminary examination of the contents of the keynote report of Chinese President Hu Jintao made at the opening session of the 18th Congress of the Communist Party of China (delivered on Nov 8) in Beijing indicates that there is not going to be any basic policy shift under the new party leadership; some cosmetic changes are however likely.

The corruption issue, which has remained prominent in China for quite some time now, finds a strong echo in Hu Jintao's report. In warning corrupt elements, the Communist Party of China chief has been more strident that the criticisms made in the past.

He has said that "if the issue is not handled well, it could prove fatal to the party and even cause the collapse of the party and fall of the state; all those who violate party disciplines and state laws whoever they are and whatever power or official positions they hold, must be brought to justice with out mercy".

Coming in the wake of the ouster of disgraced leader Bo Xilai, accused of corruption, sex and sleaze, from the party, Hu's statement is suggestive of the prevailing serious situation in China on the corruption issue. 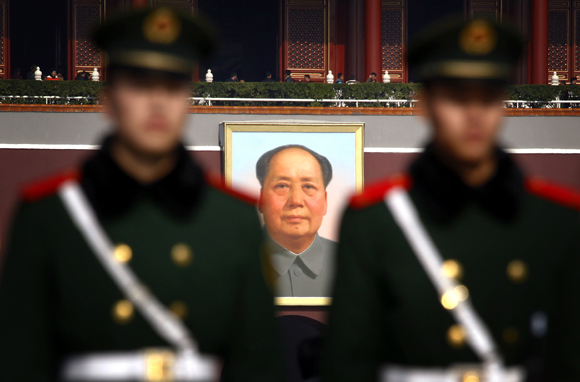 Image: Paramilitary policemen stand guard in front of the giant portrait of former Chinese chairman Mao Zedong at Beijing's Tiananmen Square, as security is tightened around the square and the adjoining Great Hall of the People
Photographs: David Gray/Reuters

One should not overestimate the step now being taken towards amending the Communist Party constitution. A draft amendment, details of which are yet to be made known, has been placed before the Congress for discussions.

According to the only official revelation notice (Xinhua, 5 November, 2012), the amendment will reflect the party's "latest theoretical achievements".

The state media has said that the status of Hu Jintao's 'Scientific Outlook on Development', which is already written into the party constitution, will be further upgraded during the Congress as a "theoretical guidance for the party for a long time" on par with Marxism-Leninism, the Mao Zedong thought, Deng Xiaoping theory and Jiang Zemin's theory of "three represents".

It is probable that the upgradation may get the party constitution backing through the proposed amendment.  On the other hand, there is a speculation in the western media that the Congress may dilute the status of the 'Mao Zedong thought' in the party constitution. This may, however, not happen as Hu Jintao has himself lauded the Mao Zedong thought in his address and respects to the memory of old party revolutionaries including Mao were paid at the start of the Congress session.

One has to recognise in this regard that Mao's legacy will be important for the Communist Party's survival as a ruling party.

Also, not new are Hu Jintao's postulates on 'Socialism with Chinese characteristics' and his prescription that in the current stage of primary socialism in China, economic development should be taken as the central task, the 'four cardinal principles' and that the policy of reforms and opening up should be adhered to. The reference to the 'four cardinal principles" implying no toleration of any opposition to party leadership is however significant at this juncture when the party has come to face challenges from both leftist and liberal ideological trends. 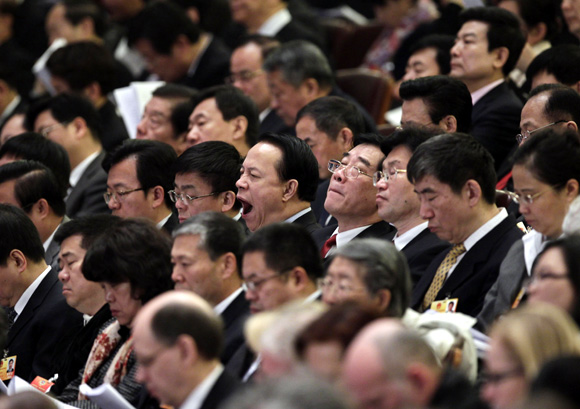 Image: A delegate yawns during the opening ceremony of the National People's Congress at the Great Hall of the People in Beijing
Photographs: Jason Lee/Reuters

Hu's call to continue to carry out 'reform of the political structure' along with the caveat that China will never copy a western political system, has been seen before. However, the chances for intra-party democracy seem to be getting a boost, judging from Hu's wish to make "people's democracy more extensive, fuller in scope and sounder in practice".

Interestingly, the official media (Global Times, November 9) has carried opinions on the opening day of the Congress cautioning against the party taking 'poor political decisions' as Mikhail Gorbachev did in the former Soviet Union and favouring the path of ' wading across the stream by feeling the way'. Indications are therefore towards the new leadership taking a cautious line towards political reforms.

Environment has emerged as most serious economic challenge 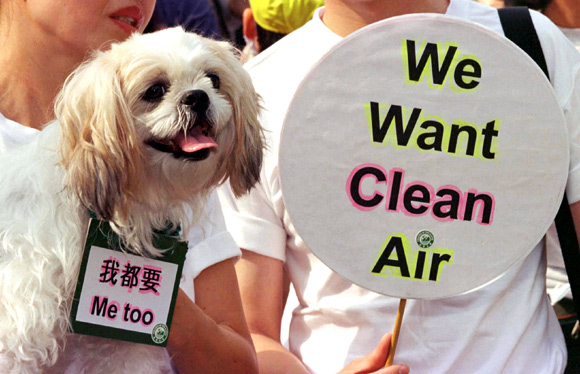 Image: A protest against pollution in China
Photographs: Reuters

In the 'overall economic approach' of Hu revealed through his keynote report, importance has been given to the boosting the domestic demand and removing major structural barriers to sustained and sound economic development, with focus on improving the demand mix and the industrial structure and promoting balanced developments between regions. The party chief has also called for new type of relations between industry and agriculture.

Notable has been the prescription that five aspects of China's modernisation drive should be developed  -- economy, politics, culture, society and ecology.  The last one has figured for the first time in a party Congress document on overall development. This shows that undoubtedly, environment has emerged as the most serious economic challenge to the Chinese leadership.

Significant also are Hu's stress on the changing the growth model in order to ensure that development is based on improved quality and performance and his plea to encourage the non-public sector while consolidating the public sector. The plan announced by him to double the country's 2010 gross domestic product and per capita income of rural and urban citizens by 2020, is being considered by some in China as ambitious. 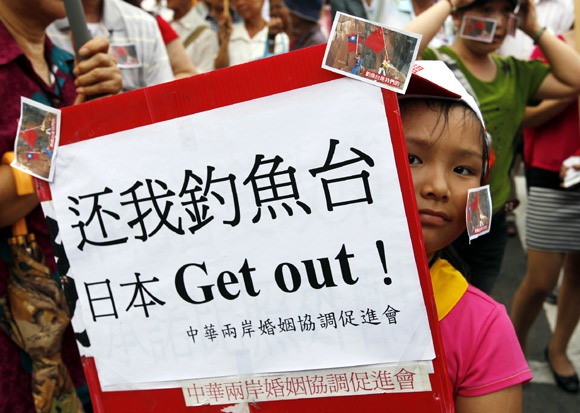 Image: A girl holding a placard reading "Give Diaoyutai back. Japan get out!" takes part in an anti-Japan protest in Taipei
Photographs: Pichi Chuang/Reuters

With respect to foreign policy, Hu expressed willingness to cooperate with other nations adding that China's resolve is to protect its national interests, without yielding to any outside pressure. This formulation of Hu is expected to be followed by the new party leadership. With core-interests based Chinese foreign policy continuing to be more specific, Beijing maintaining a foreign policy course with a mix of win-win international diplomatic initiatives and an assertive approach towards on all sovereignty-related issues, there may not be any end soon to China's tense relations with neighbouring countries having territorial disputes with it.

Notable is Hu Jintao's announcement that "full military IT applications" will be completed by 2020. Appearing new is his focus on China protecting its maritime, space and cyberspace security, developing China as a maritime power with capacity to exploit marine resources and safeguard the country's maritime interests and building China's strength to win wars in an information age.

Hu's reiteration that the party should have absolute leadership over the army, signals that the voices in China in favour of bringing the People's Liberation Army under the state control have still not subsided.

China's drive to woo Taiwan seems to have gained a further momentum. Hu has suggested setting up of 'military security trust mechanism' and signing of a 'peace treaty' with Taiwan, along with a warning that there should be no attempt for Taiwan independence and that anyone or any force trying to separate Taiwan from the mainland will not be allowed.

Interestingly, Hu did not make any reference to the use of force on the Taiwan front.