Sign in  |  Create a Rediffmail account
Rediff.com  » News » Cong reaches out to Mamata, says trust can be rebuilt

Cong reaches out to Mamata, says trust can be rebuilt 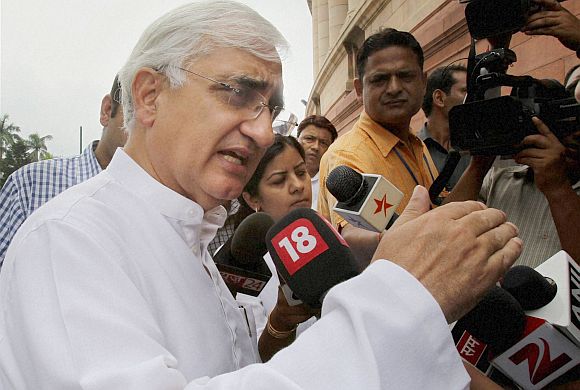 A day after West Bengal Chief Minister Mamata Banerjee's attack, the Congress on Sunday reached out to its ally saying there was need for "better communication" with Trinamool Congress and the two could rebuild trust by ironing out "disagreements" within closed doors.

Discounting the possibility of Banerjee parting ways with the Congress, senior party leader and Union Minister Salman Khurshid said there was no need to read too much into Banerjee's statement that the Congress was free to walk out of the ruling alliance in West Bengal.

"I don't think we should read too much into these things. I would certainly imagine if we can avoid them, good. Even if our disagreement we can put them across in closed doors.... I hope something like this will be worked out," he said in New Delhi.

'Disagreements can be ironed out within close doors' Khurshid asserted, "We all understand her concerns and I am sure that she also understands our compulsions. I think its just need for better communications and there isn't lack of ability on both sides to be able to communicate. I am not going to believe that they can tempt her, any person like her into their fold," he said.

'Need for better communication between Cong-Trinamool' 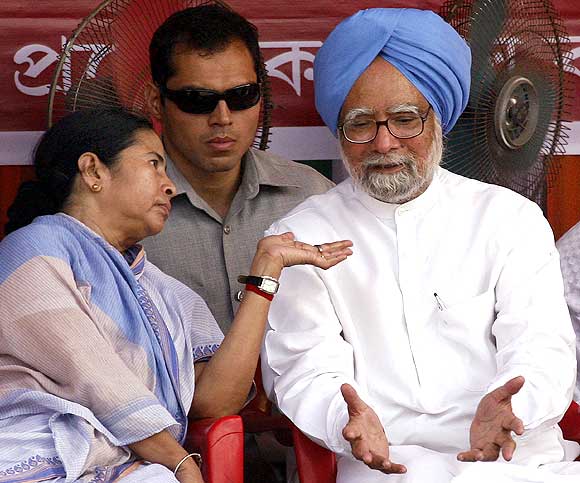 The Congress-Trinamool Congress ties have been strained with the Congress' state unit vociferously protesting against Banerjee's party.

The latest issue involves the state government's move to rename Indira Bhavan in Kolkata which has been strongly opposed by the Congress leading to a confrontation between the two allies.