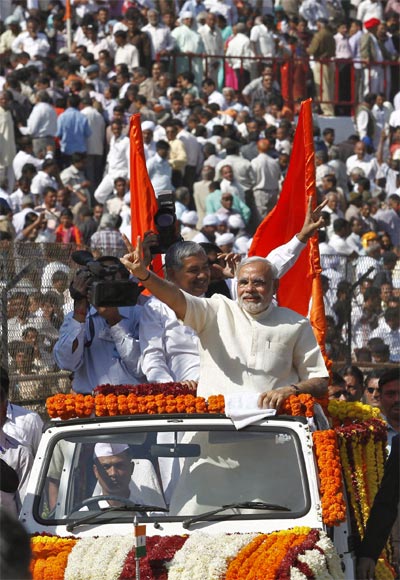 Opinion polls tell a different story, with the JD-U losing seats while the BJP gaining from the break-up. Is this because voters like Narendra Modi, wonders T V R Shenoy.

Can you judge a movie by looking at a single frame?

An opinion poll is like a still photograph, a moment frozen in time and space. A real poll-- a General Election -- is an epic movie, going through the traditional three-act structure of exposition-action-resolution.

In the past week India has been treated to two opinion polls, both claiming to be snapshots of what might happen if a General Election were to be held today, and yet they offer different results.

The Hindu-CNN-IBN-CSDS poll was first off the mark, and it gave the National Democratic Alliance between 172 and 180 seats, with the BJP winning 156 to 164 of those.

The United Progressive Alliance was estimated to get 149 to 157 seats, with the Congress accounting for 131 to 139 of those.

A few days later the Times Now-C-Voter poll gave us a different set of results. The National Democratic Alliance was estimated to win 156 seats, with the BJP getting 131 of those.

The United Progressive Alliance was estimated to get 136 seats with the Congress winning 119 of those.

How do you reconcile those results?

I propose that we set aside the differences between the two polls -- which cannot both be accurate -- and look at the similarities. 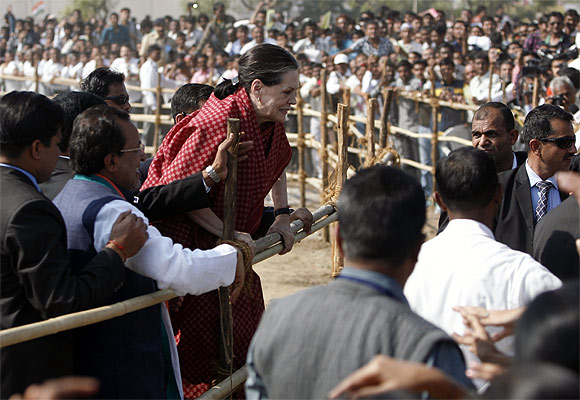 The second is that the Congress, which won 206 seats in the 2009 General Election, is set to lose anywhere between 75 seats and 90 seats.

The third is the continuing decline of the Left Front (and here the opinion polls are borne out by actual elections, the Panchayat polls in West Bengal).

Both opinion polls also agree that the unattached regional parties -- the Trinamool Congress, the AIADMK, the Biju Janata Dal, the Samajwadi Party, the Bahujan Samaj Party, and so forth -- shall play a prominent part in the next Lok Sabha.

There is, however, a major exception to this fourth trend.

Buried in the statistics is the tale of the decline of Nitish Kumar and his Janata Dal-United. The first consequence of Narendra Modi's rise to the top in the hierarchy of the BJP was that the Janata Dal-United walked out of the National Democratic Alliance, ending an alliance with the BJP that had begun as far back as 1995.

This made the chief minister of Bihar the darling of the secularists, and there was much talk of Nitish Kumar becoming the prime minister of a Federal Front government backed by the Congress.

Both the opinion polls say that Nitish Kumar's gamble has not paid off. In 2009 his alliance with the BJP paid off handsomely, with the Janata Dal-United winning 20 of the 40 seats in Bihar and the BJP picking up twelve more. Their mutual foe, Lalu Prasad Yadav's Rashtriya Janata Dal, was reduced to 4 seats. 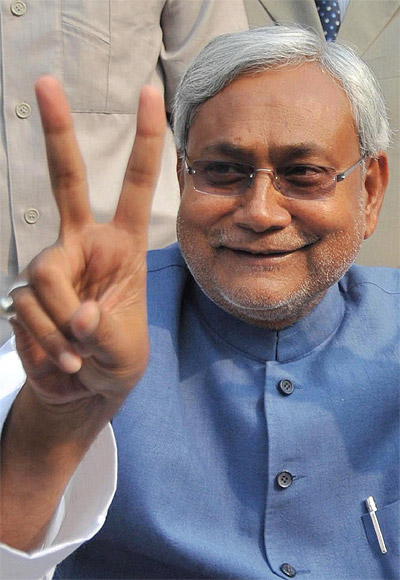 The conventional wisdom was that Nitish Kumar would benefit handsomely after he burnished his secular credentials by taking a hardline position against Narendra Modi, while the BJP would be humbled.

The two opinion polls tell a different story, with the Janata Dal -United losing seats while the BJP gains from the break-up.

Is this because voters like Narendra Modi? Both opinion polls reveal that he is India's favourite choice to be prime minister. Or is it a case of bending so far to net 'minority' votes that there is an equal, or even greater, counter-reaction by the majority community?

Or perhaps it is voters opting for the 'Gujarat model' over the 'Bihar model' because, in part, they believe that Narendra Modi is better placed to steer the economy through rough seas than is Nitish Kumar?

You can never discount any possibility in the wonderland that is Indian politics. Did anyone ever think that an Inder Kumar Gujral or a Manmohan Singh would be prime minister?

But it is safe to say that Nitish Kumar's own ambitions in that regard have received a massive setback. Had he swallowed his pride and stuck with the BJP alliance he had a fair chance of leading a National Democratic Alliance combine if it needed other parties to shore up a ministry.

Having quit the alliance Nitish Kumar may find himself playing second fiddle to a J Jayalalithaa or a Mamata Banerjee rather than to a Narendra Modi. 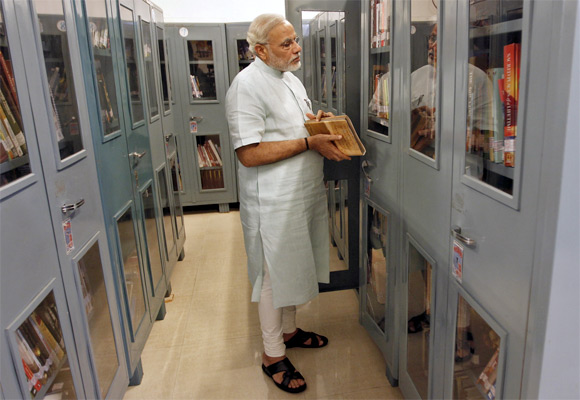 Image: Narendra Modi in his library inside his home.
Photographs: Amit Dave/ Reuters

Could the Modi effect spill over from Bihar into neighbouring Uttar Pradesh?

Virtually the first thing that Narendra Modi did as head of the BJP campaign committee was to put his own man -- Amit Shah -- in charge of Uttar Pradesh. The theme of 'good governance' will resound even more in Akhilesh Yadav's state than in that of Nitish Kumar.

The state is so poorly administered that Mulayam Singh Yadav -- both the Samajwadi Party boss and the chief minister's father -- has rebuked the government in public meetings.

Both opinion polls admitted that they had been conducted before Narendra Modi had set his plans in motion for Uttar Pradesh. How much time do those projects have before they come to fruition?

In my last column I said the Congress was wondering if Narendra Modi's star would continue to burn bright beyond winter. The two opinion polls seem to suggest that the BJP will do even better if the party continues to give Narendra Modi an ever more prominent role and if it has the luxury of time to prepare.

The Congress has no options when asked to put up a public face to oppose Narendra Modi. Will the Congress also present the BJP with more time to hone its campaign?