Sign in  |  Create a Rediffmail account
Rediff.com  » News » Chinese war games in Tibet are a warning for India

Chinese war games in Tibet are a warning for India 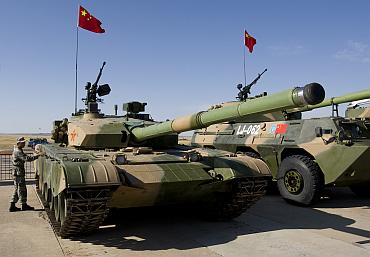 These war games are said to be in response to India's augmenting its border defences along the Chinese border. The Chinese have been perturbed with India's plan's to reactivate a forward air base at Noyoma in Ladakh.

Also Read: How India can build a ring of steel around China 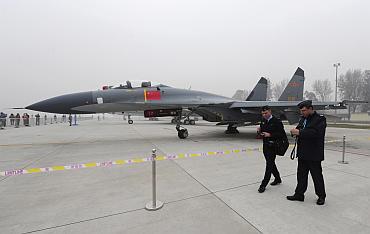 Prime Minister Manmohan Singh's recent visit to Japan, Vietnam and Malayasia has been seen in Chinese circles as a means to 'encircle' China.

In light of recent US-South Korea military drills in the South China Sea and a Sino-Japanese diplomatic row row over islands in the East China sea, the Chinese have decided to send a message to the world.

The PLA's show of strength 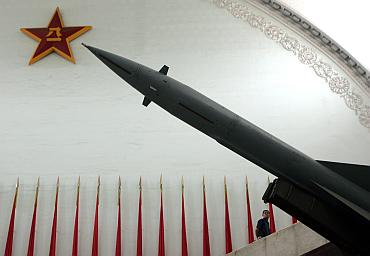 Image: A Hongqi-2 missile on display in the hall of weapons at the Military Museum in Beijing
Photographs: Jason Lee/Reuters

Experts believe that these drills will also serve as a strong warning to pro independence groups in Tibet that the Chinese could deal with any threat. The report quoted some experts as saying that this drill was aimed at augmenting the Chinese army's high altitude operations.

The report qouted a Chinese military expert, who said that the PLA wanted to show the Indian Army that it was capable of defending China's Western border. 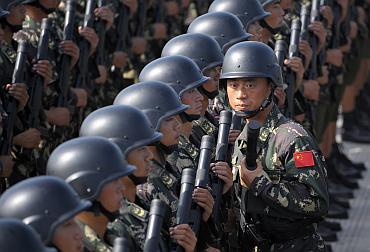 In the last few years, Beijing has augmented its rail links with the Tibetan plateau.

After repeatedly putting down protests by pro-Independence groups in Tibet, China has decided to assert its military superiority.

Both India and China are among the top 10 military spenders in the world.

Tibet and the border issue surrounding Arunachal Pradesh have bee sore points in Sino-Indian ties. India's continued shelter to the Dalai Lama, the spiritual head of Tibetan Buddhists has been China's pet peeve.