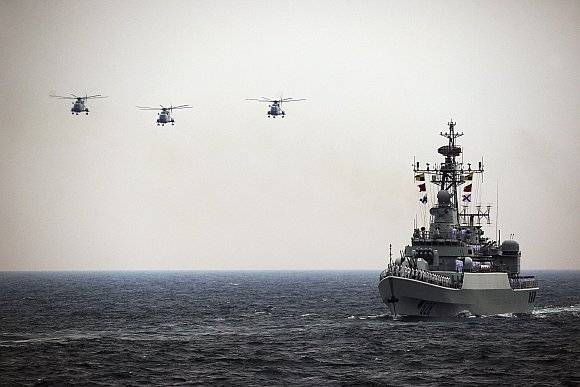 China realises that its maritime strength will give it the strategic leverage it needs to emerge as the regional hegemon and a potential superpower, says Harsh V Pant.

So finally it is out in the open. China will be setting up its first military base abroad in Seychelles to "seek supplies and recuperate" facilities for its Navy.

Seychelles has defended its decision by suggesting that it has invited China to set up a military base to tackle piracy off its coast and Beijing has played it down by underlining that it is standard global practice for naval fleets to re-supply at the closest port of a nearby state during long-distance missions. But there should be no ambiguity for the rest of the world: Chinese footprint in the Indian Ocean has got bigger and will continue to get bigger in the coming years.

China's foreign policy thinkers and political establishment have long been trying to convince the world that Beijing's rise is meant to be a peaceful one, that China has no expansionist intentions, that it will be a different kind of great power. Of course, the very nature of power makes this largely a charade, but more surprising is that western and Indian liberals have tended to take these assertions at face value. There is an entire industry in the West as well as in India that would have us believe that China is actually a different kind of a great power and that if the west could simply give China a stake in the established order, Beijing's rise would not create any complications. 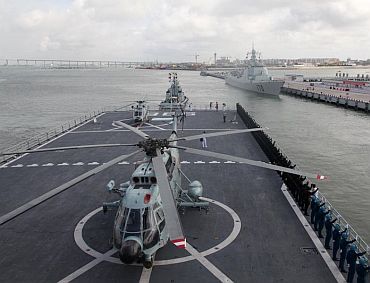 Image: A Chinese Navy helicopter is parked on a warship on part call

However, many in China have been advocating the creation of overseas bases for some time now. Shen Dingli, an influential professor at Fudan University in Shanghai, had asserted two years back that "it is wrong for us (China) to believe that we have no right to set up bases abroad." He argues that it is not terrorism or piracy that's the real threat to China. It's the ability of other states to block China's trade routes that poses the greatest threat. To prevent this from happening, China, according to Dingli, needs not only a blue-water navy but also "overseas military bases to cut the supply costs."

Of course, Shen also wraps this up in the widely accepted world peace diplomacy, asserting that the establishment of such military bases overseas would promote regional and global stability. It is a familiar diplomatic wrapping that other superpowers should easily recognise.

As China emerges as a major global power, it will expand its military footprint across the globe, much like that other great power, the United States, that has bases surrounding China. The rapid expansion of China's naval capabilities and broader military profile is a classic manifestation of its great power status. China's new naval strategy of "far sea defence" is aimed at giving Beijing the ability to project its power in key oceanic areas, including and most significantly the Indian Ocean.

China reluctant to rely on US for unhindered access to energy 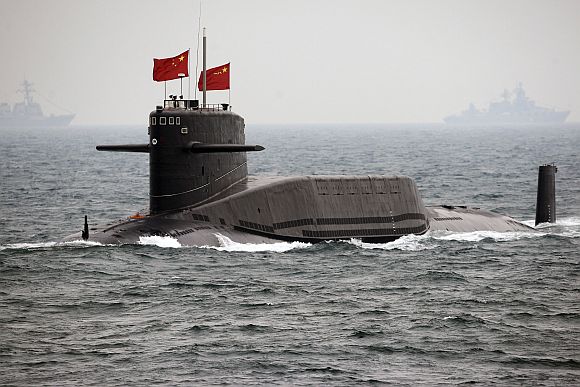 China's expansionist behaviour has, in fact, long been evident. China has been acquiring naval facilities along the crucial choke-points in the Indian Ocean not only to serve its economic interests but also to enhance its strategic presence in the region.

China realises that its maritime strength will give it the strategic leverage it needs to emerge as the regional hegemon and a potential superpower. China's growing dependence on maritime space and resources is reflected in the Chinese aspiration to expand its influence and to ultimately dominate the strategic environment of the Indian Ocean region.

China's growing reliance on bases across the Indian Ocean region is a response to its perceived vulnerability, given the logistical constraints that it faces due to the distance of the Indian Ocean waters from its own area of operation.

Given that almost 80 percent of China's oil passes through the Strait of Malacca, it is reluctant to rely on US naval power for unhindered access to energy and so has decided to build up its naval power at choke points along the sea routes from the Persian Gulf to the South China Sea. Yet, China is also consolidating power over the South China Sea and the Indian Ocean with an eye on India.

China following in the footsteps of other major global powers 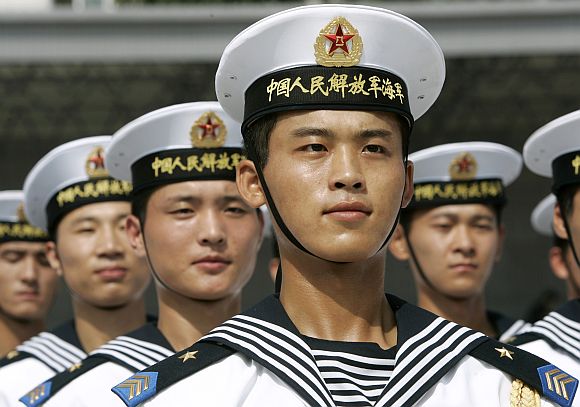 Image: Navy sailors of the Peoples Liberation Army during a ceremony in Beijing
Photographs: Reuters

China's growing naval presence in and around the Indian Ocean region, beginning in areas such as China's Hainan island in the South China Sea, should be troubling for India. Of particular note is what has been termed as China's 'string of pearls' strategy  - some elements of which are no doubt hyped - that has significantly expanded its strategic depth in India's backyard.

It is possible to explain the construction of these ports and facilities by China along India's periphery on purely economic and commercial grounds, but regional and global powers like the US, Japan and India inevitably view the sum total of China's diplomatic and military efforts in the Indian Ocean as projecting power vis-a-vis competing rivals. Moreover, most of Chinese naval facilities in the Indian Ocean are dual use in nature and no serious strategy can discount their future military use.

China is merely following in the footsteps of other major global powers who have established military bases abroad to secure their interests. There is only one kind of great power, and one kind of great power tradition. China is not going to be any different. The sooner India acknowledges this, the better it will be able to manage China's rise and protect its own vital interests.