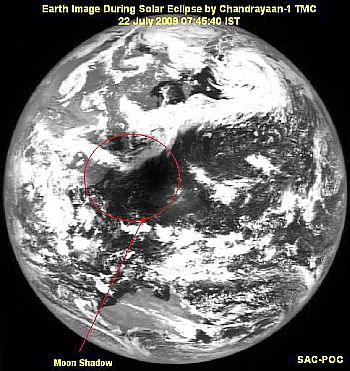 India's first unmanned moon mission, Chandrayaan-1 captured the shadow of the moon on the earth's surface during the July 22 solar eclipse. This feat has been achieved just a week after a shadow was cast on the Chandrayaan following the failure of a crucial sensor on board the spacecraft.

The images were captured by the Terrain-Mapping Camera (TMC) on board the 514-kg spacecraft, which is orbiting at 200 km above the lunar surface. The Indian Research Space Organisation in Bangalore released these images. 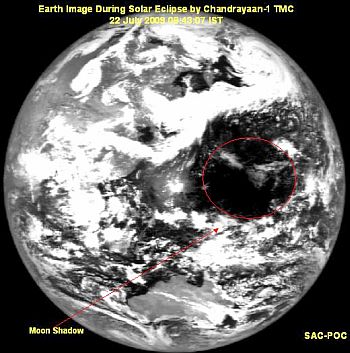 "Chandrayaan-1 has tracked the movement of moon's shadow on the earth during the total solar eclipse on July 22," Indian Space Research Organisation (ISRO) spokesperson S Satish.

The TMC has transmitted the pictures to the space agency's Deep Space Network (DSN) at Baylalu near Bengaluru.

The high-resolution images of the TMC from 07:45 IST show the lunar shadow spreading its footprint from northeast China to northern parts of Australia. ISRO had earlier announced that it plans to study in detail the effects of total solar eclipse on July 22.