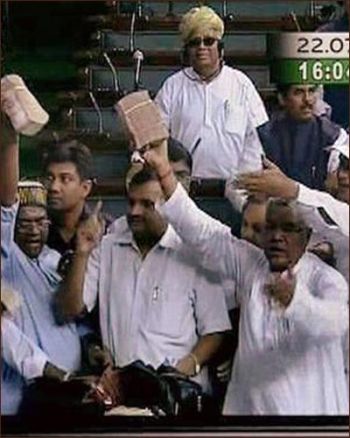 Congress and Samajwadi Party on Thursday virtually got a clean chit in cash-for-vote scam in a local court, which was told by the Delhi Police that nobody from the two parties had contacted Sohail Hindustani, the alleged 'master orchestrator' of conspiracy to bribe BJP MPs to vote in favour of Manmohan Singh government in a trust vote in 2008.

"During investigation, it has come on record that neither any leader of Congress Party has made any effort to contact Hindustani nor any SP leader contacted him to strike a deal with MPs," the crime branch of Delhi Police told Special Judge Sangita Dhingra Sehgal who remanded Hindustani to police custody till Friday.

The police said "rather it is clear that it was only Hindustani who was making repeated attempts to contact various persons to strike a deal for monetary considerations in the name of three BJP MPs".

The judge also extended the police custody of another accused Sanjeev Saxena, alleged to be a close aide of Rajya Sabha MP Amar Singh, till Friday after the prosecution submitted they both need to be confronted to complete the chain of events.

During the arguments, advocate Anand, appearing for Hindustani, accused the Delhi police of giving a clean chit to Congress party despite the fact that the probe in the case is still on.

"How can you (police) give a clean chit to Congress party at this stage of the probe? They are catching the whistle blower (Hindustani) and saving the government," Anand said refuting the charge of the probe agency that Hindustani is the main conspirator in the whole issue.

While seeking two-days police custody of both Hindustani and Saxena, public prosecutor Rajeev Mohan said July 22, 2008, was the "most unfortunate day for a democratic set up" as money was waved in Parliament during the debate on the confidence motion. 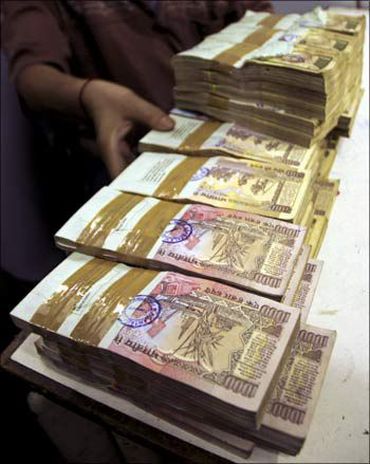 He said the seven-member parliamentary committee, constituted by the Speaker of the Lok Sabha to probe the matter, had also submitted its report running into 700 pages in which they had indicted three persons for the scam -- Sanjeev Saxena, Sohail Hindustani and Sudheendra Kulkarni.

The prosecutor submitted they have examined various persons in their probe into the scam saying as per the evidence and documents, Hindustani was the "master orchestrator of the well-hatched conspiracy."

"Hindustani arrived in Delhi on July 20, 2008, and he was having a list of MPs whom he intended to contact to strike the deal. He was the person who came in front to encash the situation as the confidence motion was scheduled on July 22.

He contacted different persons (including one S P Gupta and a SP leader whom he called Guruji) to encash the situation," he said.

The prosecution submitted they have recorded the statement of S P Gupta who said Hindustani offered him the support of three BJP MPs on the motion of confidence to suit the interests of Congress party.