Sign in  |  Create a Rediffmail account
Rediff.com  » News » BJP vows to kick out 'coalition of the corrupt' 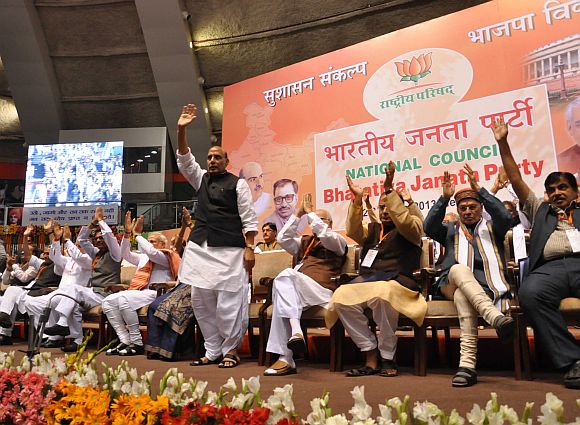 With an eye on next year's general elections, the Bharatiya Janata Party on Sunday projected itself as the sole alternative to Congress, vowing to move ahead with unity and expand the National Democratic Alliance to oust the United Progressive Alliance, which it termed a "coalition of the corrupt".

Slamming the UPA government for a series of scams, the political resolution at the BJP National Council meeting called for a "decisive change" to rid the country of "corruption, mal-governance, price rise and unresponsive record of the government which has made the life of the common man utterly miserable".

"It is not a coalition government but is indeed a coalition of the corrupt", the resolution, which was passed unanimously, said and pitched BJP as an alternative to Congress, backing it with its record of "good governance".

"There is gloom and despair. The UPA is leaving a legacy of insecure India and suffering India. India needs to be redeemed by the NDA under the leadership of BJP. It is time to awaken the country, expand the NDA and generate a hope for decisive change whenever election is held. The choice is clear -- to relieve the country of the misery and misrule of the Congress led UPA, the BJP led NDA with its exemplary record of good governance is the only alternative," the resolution said. 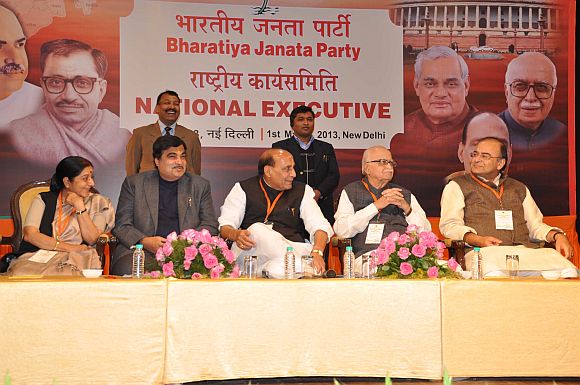 The BJP political resolution, which was put forth by party's deputy leader in the Rajya Sabha Ravi Shankar Prasad said, was supported by Leader of Opposition in Lok Sabha Sushma Swaraj who said the party will face a litmus test in six states before the Lok Sabha polls.

Exhorting partymen to stand united and be actively involved in the coming times, Swaraj said BJP has to not just retain power in Madhya Pradesh and Chhattisgarh, but also wrest control from Congress in Rajasthan and Delhi, besides bringing back "stable" governments in Karnataka and Jharkhand which have suffered from instability in the past.

"People of the nation want to rid themselves of this corrupt government and are looking at us with hope. This hope of people has become a challenge for us. We cannot leave this nation in the hands of those who are looting the nation day in and day out," she said.

The resolution also said, "the institution of an effective Lokpal and an autonomous and accountable CBI are important institution to check corruption and the BJP stands committed for the same".

The so-called Third Front is a 'disgruntled' house 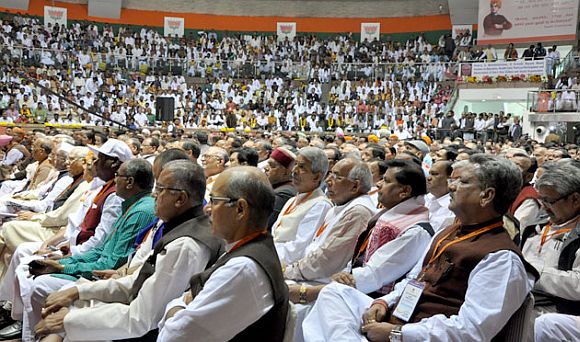 Swaraj claimed the party would repeat its Gujarat feat and score a hat-trick in poll-bound Madhya Pradesh and Chhattisgarh.

The resolution pointed out the "historic" victory of the party in Gujarat under Narendra Modi and sought the support of partymen to bring the party to power as a credible alternative to the Congress-led alliance.

Former BJP President Venkaiah Naidu also dismissed the "so-called Third Front" as a "disgruntled" house and said such parties are bailing out UPA alliance now and then.

"They talk differently in Parliament and stage a walkout, but bail out the UPA the same evening. They should be knocked out in elections," he said, charging them with being responsible for all sins and acts of omission and commission by the central government.

Swaraj called upon party leaders to draw lessons from Himachal and Uttarakhand, which the party lost due to "lack of unity and coordination", despite the fact that the BJP governments "there gave good governance".

UPA has failed on all fronts 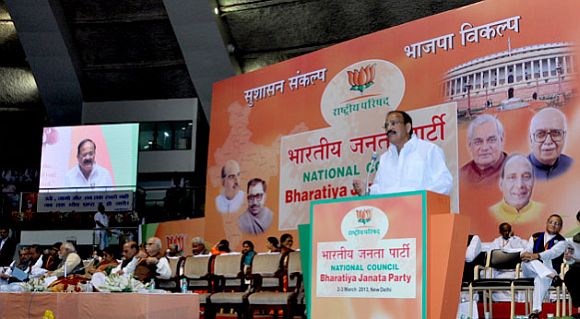 "We should not repeat what happened in Himachal and Uttarakhand and draw lessons, as we lost the governments there due to lack of unity and coordination. We should not allow that to happen again. We should present unity and display active involvement in the coming elections," she said.

Intervening in the debate on political resolution, Naidu hit out at the Congress saying terrorism was flourishing due to the inaction of the UPA government at the Centre.

"You are encouraging terrorism in the country by not acting tough against the perpetrators. Don't dare to accuse nationalist organisations like BJP and RSS instead," he said, adding that UPA has failed on all other fronts as well be it tackling price rise, reviving economy, foreign policy, protecting women, fighting corruption and getting back black money stashed abroad.

Earlier, moving the resolution Ravi Shankar Prasad listed out a series of scams under the UPA and said the government's intent looks "suspect" in ordering a JPC probe in the recent VVIP helicopter scam.

The political resolution also highlighted the issue of women security in the centre of India's political discourse with the Delhi gangrape and the Bhandara rape incidents in focus, besides the barbaric attack of Indian soldiers by Pakistani Army.

'Scam after scam has indeed stunned the nation' 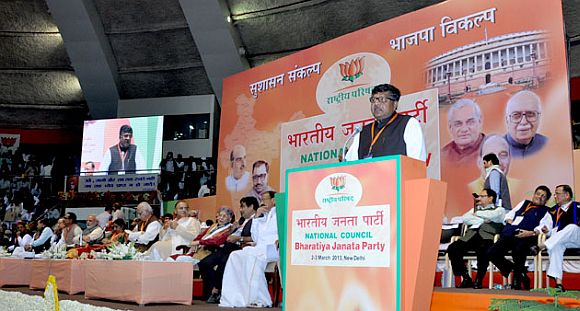 The BJP also lashed out at Prime Minister Manmohan Singh and UPA Chairperson Sonia Gandhi for maintaining "conspiracy of silence" and "culpability of inaction" and "gross indifference" towards the plundering of the nation's wealth.

"Scam after scam has indeed stunned the nation," the resolution said.

On the hanging of Afzal Guru, BJP said it was "deliberately delayed" for vote bank politics inspite of the Supreme Court having upheld his death sentence more than seven years ago. "The Government ought to have taken adequate measures to prevent any terrorist revenge in its wake," the resolution said.

Attacking the government for its failure to prevent the Hyderabad blasts despite prior information, BJP said, "Obviously the Government has a lot to explain as to why it failed to act in time when it had to knowledge?" 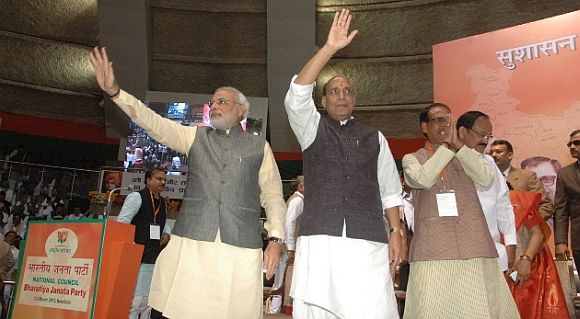 The resolution lamented that "rank politicisation of terror for vote bank politics has only weakened the nation's resolve and capacity to combat this menace. BJP firmly believes that there must be zero tolerance and compromise against terrorism because not only the security and integrity but even the sovereignty of the country is involved.

Seeking capacity building in the fight against terror, BJP said combating terrorism is the combined responsibility of the Centre and states.

BJP also said it has no objection to NCTC but it should be within the constitutional framework.

"The fight against terrorism can and must co-exist with federalism. It would be meaningless to debate an imaginary federalism verses terrorism issue. There is no objection in principle to a National Terrorism Counter Centre but its powers and jurisdiction must be within the constitutional framework," BJP said in its resolution.