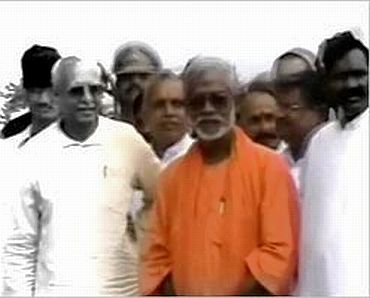 The confession of Swami Aseemanand, member of the right-wing Hindu group Abhinav Bharat, will be a turning point to four different cases. The confession, which came a couple of days back, details the manner in which the Mecca Masjid, Samjhauta, Malegaon and Ajmer blasts were carried out.

While there is a debate still on whether he actually confessed on his own after being touched by the conduct of a former accused in the Mecca Masjid case or that he did so under duress, the fact remains that there is a ray of hope among many youths who continue to languish in jails after being implicated in the above mentioned cases.

Click on NEXT to read how shoddy investigation landed most of these youths behind bars... 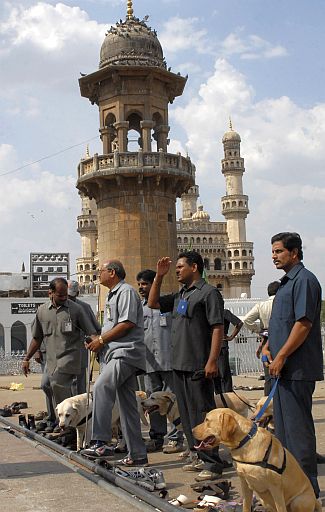 Image: Policemen use sniffer dogs to inspect the blast site
Photographs: Reuters
Mecca Masjid case: Post the bombing, few more lost their lives in the subsequent police firing. The immediate blame was put upon Shahid Bilal, a resident of Moosrambagh in Hyderabad and the Harkat-ul-Jihadi.

Bilal was, however, not in Hyderabad and had moved to Bangladesh at that time. The Hyderabad Police picked up 110 men in a few days and detained them for questioning.

Finally, the Hyderabad police narrowed the list down to 27 youth and claimed that they had carried out the blasts in a bid to create communal tension.

After the initial arrests, the case against these youth started to fade out and all were booked for conspiracy. In their chargesheet, the police claimed that these youth had gathered at a graveyard and were viewing CDs of the Babri Masjid demolition. The police also claimed that they had circulated the CDs and were spreading communal hatred.

Today, however, these youth are all free, having been acquitted for want of evidence. 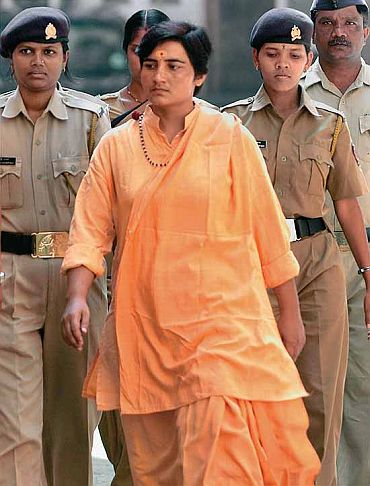 Malegaon blasts case: On the eve of Shab-e-Barat on September 8, 2006, a series of blasts rocked Malegaon in which nearly 37 people were killed and several others injured.

A month later, the police picked up a youth by the name Noorul Huda Shamsuddoha and termed him as the person who had planted the bomb.

The next couple of days saw more arrests -- Dr Salman Farsi, Lateef Aimi and Dr Farooq Makhdhomi. While the ATS continued to claim that this was an operation carried out by the Muslim extremists, the people of Malegaon termed this as a conspiracy against them and said that Muslims could not have been involved in the killing of their own people.

But the case changed completely after Hemant Karkare took over as ATS chief. His investigation into the case blew the lid off the earlier ATS theory and as investigations progressed, he brought to book the likes of Colonel Shrikant Purohit and Sadhvi Pragya Singh.

This part of the probe sent shock waves and the whole angle of terror by Hindutva factions came to the fore. Today, the Malegaon case is at a stand still at least for the Muslim youth who are in custody.

The youth who have been arrested continue to fight the legal battle. Their demand to be released in the wake of the Aseemanand confession has only become louder. 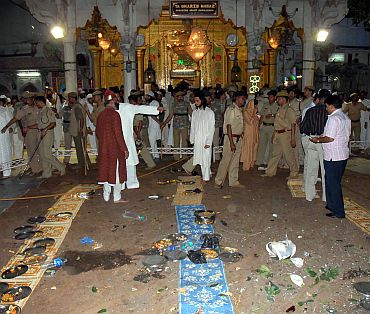 Image: Security personnel and onlookers stand at the site of a bomb blast in Ajmer
Photographs: Reuters

Ajmer blasts case: Following the Ajmer blast, there was a big theory on how Islamic groups had started targeting Muslim shrines.

The finger was pointed once again at the Harkat-ul-Jihadi and it was said they had adopted the Lashkar-e-Tayiba policy of attacking Sufi shrines, as it did not subscribe to their ideology.

The fact is that there was never any major breakthrough made in this case. The entire investigation, which was carried out by the Rajasthan ATS, was based more on theory and after a couple of days, they did manage to put one name into the case.

The mastermind in this case was called Syed Salim. The police said he belonged to Hyderabad and had fled the place. They also went on to claim that he had got in touch with the HuJI operatives during his stay in Ajmer. The Rajasthan police said that they had specific information that he belonged to Hyderabad and a Telugu newspaper, which was found at the site, was one of the leading clues to this.

This probe, however, took another turn after the government in Rajasthan changed. The ATS started looking deeper into the case and found that the blasts were the handiwork of the Malegaon bombers. 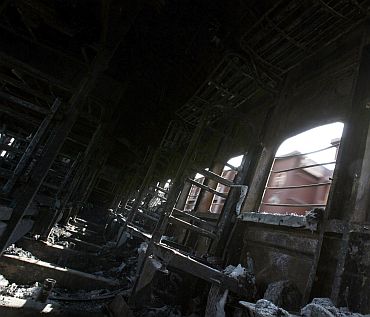 Image: A view of a burnt carriage of Samjhauta Express train in Deewana near Panipat town
Photographs: Desmond Boylan/Reuters

Samjhauta blast case: It was stated at first that the Lashkar-e-Tayiba had carried out the bombing of the Samjhauta Express to derail the Indo-Pak peace process. The Haryana Police, which was handed over the investigation, commenced its probe looking for a Lashkar-e-Tayiba angle into the probe.

Despite months of investigation, they did not find anything in this regard. Then they made a breakthrough when they tracked the shop from where the suitcase used to carry the bomb was bought.

However, the probe came to a standstill after some members of the investigating team stated that they were under immense pressure not to probe the case any further.

The first time that the other angle to these blasts cropped up was when the Malegaon case was cracked. Dayanand Pandey was the first person to speak about the involvement of right-wing factions in the case. The NIA is now in charge of this case and will probe it on the basis of the statements made by Swami Aseemanand.