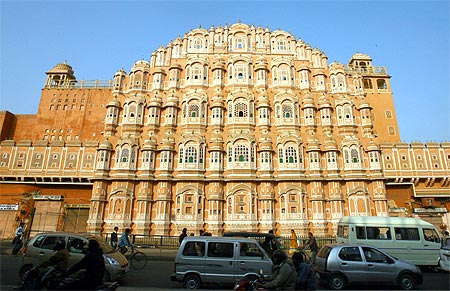 For his distinguished academic accomplishments, Arvind Panagariya was among the Indian Americans awarded with the Padma Bhushan by the Government of India this Republic Day.

Arthur J Pais spoke to the economist about his amazing life story -- from improverished childhood in Jaipur to the hallowed portals of Columbia University in New York.

The first of Rediff.com's series on Indian Americans who won the Padma Bhushan and Padma Shri honours this year.

Unlike many families that made money out of the opium trade in 19th century British India, the Panagariya family in Rajasthan did not know how to save it and build new businesses once the trade was banned. As a result, Arvind Panagariya's father Balu Lal Panagriya was born in poverty and fought his way every step to educate himself.

"It was always an uphill battle for him, he was an orphan at a young age," said Arvind Panagariya

"He was an honest government official and always stressed the importance of integrity. He was a self-made man and what I have learned from his life has shaped me considerably. When he decided to build a house, he did it on the outskirts of Jaipur as he could not afford to buy land in the city. Today, the city has grown wide and the land and the house are worth millions of rupees."

His most endearing quality is his accessibility to students 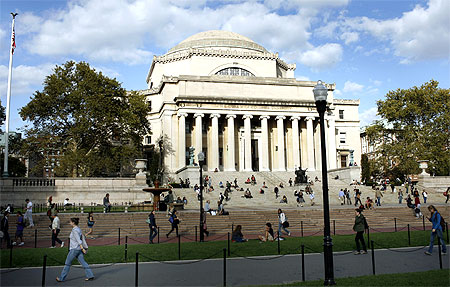 Panagariya, a Princeton University alumnus, is professor of economics and Jagdish Bhagwati Professor of Indian Political Economy at Columbia University, and author of the monumental India: The Emerging Giant.

A strong proponent of free trade and liberalisation of Indian economy, he has served as chief economist, Asian Development Bank, and professor of economics and co-director, Centre for International Economics, University of Maryland at College Park.

He has also worked for the World Bank, the International Monetary Fund, the World Trade Organisation, and the United Nations Conference on Trade and Development.

Perhaps his most endearing quality is his accessibility to students. When you call his office at Columbia, you are directed to two phone numbers in case it is an urgent situation -- his homes in Maryland and in New York where the father of two grown sons lives with his wife Amita.

"You may say people like Arvind and me are old fashioned," his frequent collaborator Professor Jagdish Bhagwati has said. "In the academic world, well-known professors are so busy with everything else but teaching. Students find it difficult to reach them. But some of us are different. We take our teaching responsibilities very seriously."

'Getting into Princeton was something I had never expected' 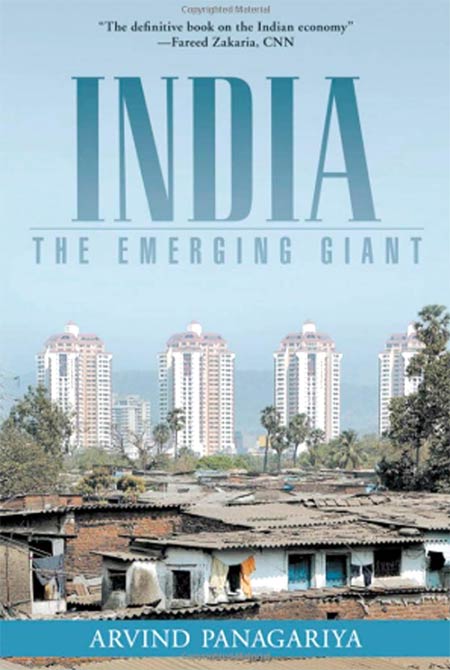 Panagariya, youngest of the three sons, had his schooling in Hindi and often walked miles to school. His mother Mohan Kumari, who is in her 90s, cannot read or write. But education was given paramount importance in the Panagariya family, with one of his brothers taking up engineering and another, medicine.

Babu Lal wanted Arvind to take the competitive Indian Administrative Service examination after the son had got his first college degree. But Arvind did not fancy a government career.

"My father was a very persuasive person," he said. "He said I should study economics and history in college, and some math and statistics, convinced that I would then do well in the written IAS exam."

He said he cannot explain what kind of audacity came over as he applied to top American universities and got admission in 1974 at all three -- Princeton, Chicago and Cornell.

"Even today, I cannot understand how I came to be admitted," Panagriya said, laughing.

"When I was reviewing student applications at the University of Maryland, I told myself on several occasions if I were to send out the same application today, I would not be admitted even to a medium-standard school, let alone Princeton. I had done well in my studies in India, but then I had not gone to elite schools or colleges there. And who had heard of Rajasthan University here? So getting into Princeton was something I had never expected. But I will also say that I vindicated the faith the school had in me."

The bigger obstacle was writing the IAS examination. He had no heart in it, but he did not want to displease his father. Then they found out he could not write the examination for one year because of a technical reason that had to do with the qualifying age. He thought he could not come to Princeton for a year, but the school told him that while it could keep his admission for a year, it could not guarantee that the fellowship would be available after a year.

"It was becoming clearer to me that I would be taking a bigger risk staying back to study for the IAS exam," Panagariya remembered. "What if I did not get into IAS, I thought. Perhaps the fellowship would not wait for me at Princeton. I don't think I would have had the courage to defy my father and come to America. My brother persuaded my father to give me the permission and even helped me to buy the ticket."

'I have been inclined to be argumentative from my childhood' 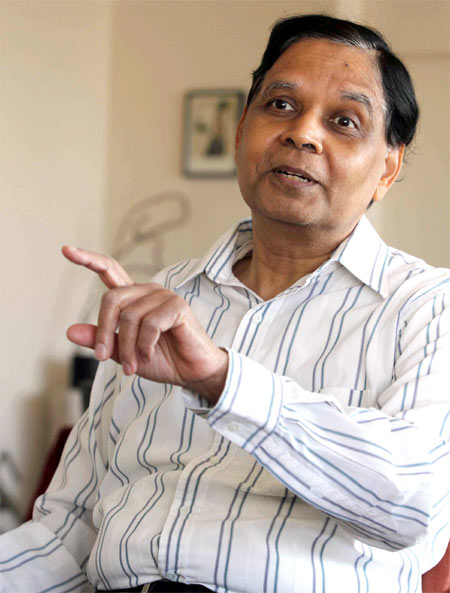 India and its economy has never been far from Panagariya's life for over four decades. Ditto for Indian popular culture -- he and his wife love discussing old and new Hindi songs.

Panagariya, who has written or edited nearly a dozen books, has also been investigating, along with Bhagwati, the liberalisation of the Indian economy and the success and failure of reforms in key areas like health and education.

The duo received a $3.5 million grant from the John Templeton Foundation to conduct research over four years. Bhagwati and Panagariya have recently worked on India's Tryst with Destiny: Debunking Myths that Undermine Progress and Addressing New Challenges.

Also to be published within a year is India's Reforms: How they Produced Inclusive Growth, edited with Bhagwati and to be published by Oxford University Press. Then there is Free Trade and the Developing Countries, which he says has the same depth and breadth as India: The Emerging Giant.

Questioning standard notions about poverty and social justice, arguing against the grain and politically correct theories, comes naturally to Panagariya. "I think I have been inclined to be argumentative from my childhood," he said. "And I was also a contrarian. I was never shy in the classroom."