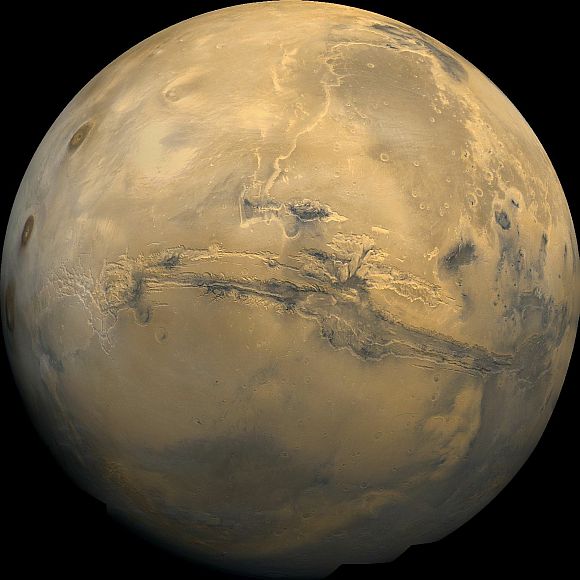 SpaceX founder Elon Musk has announced detailed plans to send 80,000 people to colonise Mars by ferrying explorers to the Red Planet for $500,000 (Rs 2.78 crore) per trip.

Musk, the first private space entrepreneur to launch a successful mission to the International Space Station, said what would begin by first sending less than 10 people could blossom "into something really big".

"At Mars, you can start a self-sustaining civilisation and grow it into something really big," Musk told the Royal Aeronautical Society in London.

Laying out precise details and figures to his "difficult" but "possible" plans, the space pioneer says the first ferry of explorers would be no more than 10 people at a price tag of $500,000 per ticket, the Daily Mail reported. 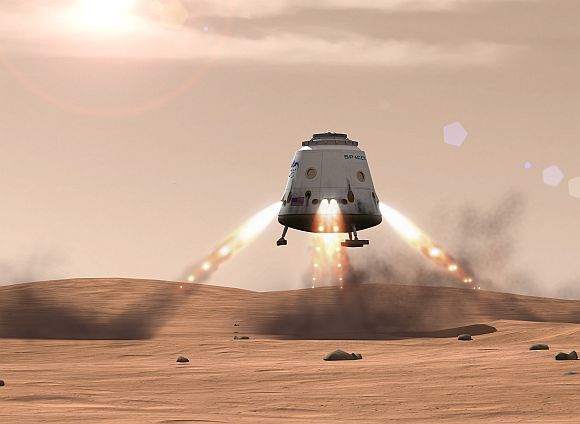 Image: Artist's rendition of a Dragon spacecraft landing on the surface of Mars
Photographs: Courtesy SpaceX

"The ticket price needs to be low enough that most people in advanced countries, in their mid-forties or something like that, could put together enough money to make the trip," he said.

Instead of lounging around on an interplanetary vacation, the passengers would be sent to work, carrying with them equipment to build sustainable housing on the dusty and currently barren soil for future generations, the report said.

Immediate ground work would focus on building transparent domes pressurised with carbon dioxide while possibly covered in a layer of water to serve as protection from the Sun.

Musk, founder and CEO of private spaceflight company SpaceX, claimed with the help of carbon dioxide, Martian soil would be capable of growing crops for food.

Equipment carried over could also produce fertilisers, methane and oxygen using the atmosphere's natural elements of nitrogen, carbon dioxide and its surface of ice water.

One person out of every 100,000 people would be interested in making the journey with 8 billion expected on Earth by time his plans become reality, Musk said.

He expects the mission to getting man to the Red Planet to be completed in the next 15 to 20 years.

Phase two would require a SpaceX design of a "rapid and reusable" vertical-landing rocket, which would be "the pivotal step to achieving a colony on Mars".

Musk said such a design is underway in his Falcon 9 rocket, currently undergoing testing for vertical take-off and landing.

Click on MORE to see stunning photos of Mars...