'When they come to India they feel good' 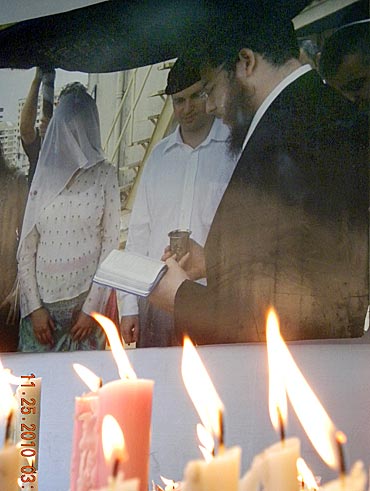 Little school children, in blue-and-white uniforms, knapsacks on their backs, wander in to look curiously at the rows of pink and white candles whose flames flutter cheerfully in the wind.

They stop to gaze carefully at the large photograph on the wall, behind the candles, of a happy couple on their wedding day, being married by another smiling young husband and wife.

They inch inwards and look at the elderly couple fielding questions from a battery of reporters accompanied by television cameramen.

It is open day at Nariman House or Chabad House on November 25, a building that has been barricaded to the public for most of the year.

And all of Colaba in south Mumbai, it seems, has arrived at this still unrepaired high rise to watch the second anniversary commemoration ceremony in memory of Rabbi Gavriel Holtzberg and his wife Rivka, just 29 and 28 years old when they died on that horrific night two years ago.

The commemoration is a day early since 26/11 this year falls on the Jewish Sabbath.

Nachman Holtzberg, Gavriel's father, wears orthodox Jew attire -- an old-fashioned black suit, white shirt and a black skull cap under a black hat. Freida Holtzberg, Gavriel's mother, is in a grey plaid skirt suit. They are both solemn, bewildered by the media attention. But serene.

Freida's furrowed face, though calm and composed, says much. It is no longer numb or perhaps deadened with grief as it was last year.

It is a peaceful face. And when a particularly lovely thought about her late son or daughter-in-law or their surviving grandchild, little Moshe crosses her mind, it glows radiantly, with a quiet happiness, quite like the light of the candles in front of her.

'The good, amazing deeds, that their kids did while they were alive, are still inside its walls' 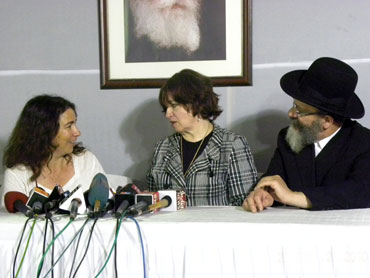 Her English is halting. Though the Holtzbergs (East European Jews from Israel) have lived in Crown Heights in Brooklyn in New York City for 40 years Freida speaks mainly Hebrew and Yiddish and prefers to speak to Rediff.com through a family friend, Aimee Ginsburg, the India correspondent for the Israeli daily newspaper, Yediot Achronot.

"They feel great (about coming here). They say that when they come here and are actually in the place (Nariman or Chabad House) and sitting in the building themselves they feel wonderful. The building has fully wonderful spiritual energy in it."

"And that all of the good, amazing deeds, that their kids did while they were alive, are still inside of its walls. When they come here they feel good. They feel positive. They like being here. When they are on their way here they are happy. They are happy they are going to be here again."

'He thinks his home is Mumbai' 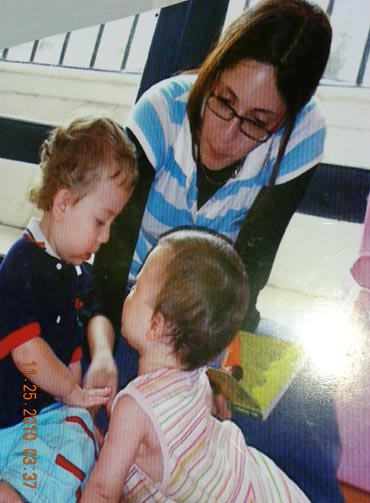 Image: A photograph of Rivka Holtzberg with Moshe up on the walls of Nariman House
Photographs: Vaihayasi Pande Daniel/Rediff.com
Indeed half an hour earlier, in an impromptu press conference, the Holtzbergs told the assembled journalists how much they appreciated India and their unusual relationship with a country where their son and daughter-in-law died and their grandson was reborn.

Freida, speaking through Aimee, in a quiet emotional voice, had underlined the special connection their grandson Moshe feels for India.

"Even though little Moshe was only two years old when he left... actually he was two years exactly.... his birthday was a few days after he lost his parents... he fully remembers India. He still thinks of himself and his home as Mumbai," she said.

"And whenever he is somewhere and people say to him, 'Come we are gong home' he says, 'No, my home is in Mumbai. Or he says, 'You mean we are going to Mumbai because that is where my home actually is?' He feels very connected," she adds.

Moshe, she said, is even collecting pocket money to make a trip to Mumbai.

"He speaks English with (his nanny Sandra Samuel who saved him from the terrorists). He even knows some Hindi which he speaks with Sandra. That was the wish of his dad who felt that since he was living here and Rabbi Gaby and Rebbetzin Rivka had planned to dedicate their lives here. They had no plans of leaving so they thought their son should know Hindi so he could make friends, communicate with everybody so his dad had wanted him to know the language."

ALSO READ: An encounter with the nanny who saved Moshe's life

Moshe's drawings are still on the wall 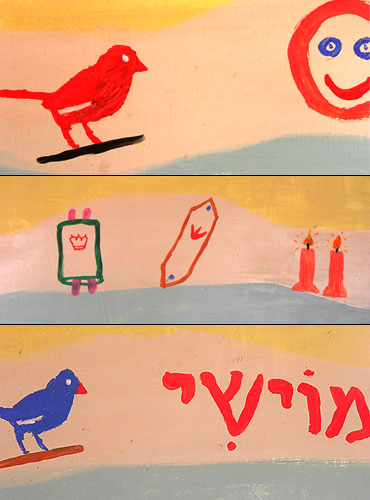 Image: Moshe's drawings on the wall at Nariman House
Photographs: Vaihayasi Pande Daniel/Rediff.com
Freida and Aimee explain later that the actual commemoration of the memory of the younger Holztbergs took place earlier this month.

"Today (as per Jewish custom) we are not (exactly) celebrating. We are commemorating. Of course, it is solemn, but no one has to stand around and cry and, of course, we are remembering the dead people in happiness. It is not ritualistic."

"We light a memory candle on that day (death anniversary) according to the Jewish year which is different from the Christian. It is according to the moon. So the Jewish date of their death was about two-and-a-half weeks ago. It was commemorated officially in the Jewish way in Israel, but then because there is a feeling of connection with all the people they came to do it on the Christian date (here)."

Two years after the terrorist attack at Chabad House, the Jewish outreach centre called Nariman House by locals, where six Jews were killed by two Pakistani terrorists, the building still reflects the presence of the young rabbi and his wife.

Not physically. But in spirit.

Though the brutal attack as well as the operation to free it of the terrorists, and the start of a round of repairs, has left the building seeping cement dust, with gaping walls, grenade and bullet pockmarks and doors, fittings and furniture askew, it still feels poignantly as if the folks who lived here left in a hurry and may be back soon.

A frame of family photographs sits on a shelf. And a child's charming drawings (and probably his mother's) are still on the wall of a room that was painted in bands of blue, pink and yellow for little Moshe. 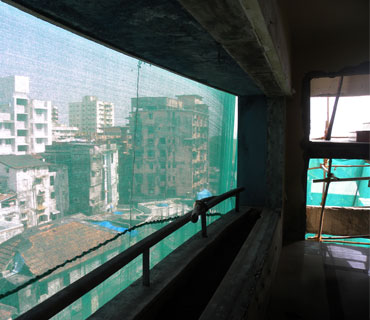 Image: A view of Colaba from an upper floor of Nariman House. A hole ripped from the exterior by grenades
Photographs: Vaihayasi Pande Daniel/Rediff.com
On the breezy terrace, on the sixth floor, that offers a splendid view of Colaba, the Taj Mahal hotel and the cool blue Arabian Sea, where the Holtzbergs held get-togethers, and even hosted a wedding (as attested by the photograph downstairs in front of the candles), a fridge still stands in a kitchenette.

You overcome the inexplicable urge to open it, expecting it to still have groceries of a family that once live here, by all accounts, in happiness, marking some of life's important milestones in a land where they expected no harm to come to them.

In November 2008, I spent three days and nights gazing at this strange building in the middle of Colaba market, that today I am standing inside.

A journalist, who spends more time at a desk than in the field, I was accidentally thrown into the vortex of 26/11 when I happened to be at Chowpatty, hardly a few metres away, when the police bravely overpowered terrorist Ajmal Kasab and also when the drama at Nariman House unfolded a few streets away from my home.

Watching the commandos recapture Nariman House from the rooftop of a nearby building, where a few of us had taken positions, was an eerie experience.

We saw neither a terrorist nor a resident during those desparate hours on November 28. Between deafening grenade and bullet blasts the only sounds to be heard were fluttering pigeons and the flapping curtains at the windows of Nariman House in a silent, still, Colaba.

The interior of Nariman House today has been shorn of that eerie feeling.

There is just bitter-sweet melancholy perhaps.

ALSO READ: When Kasab was caught

'Moshe is a happy boy' 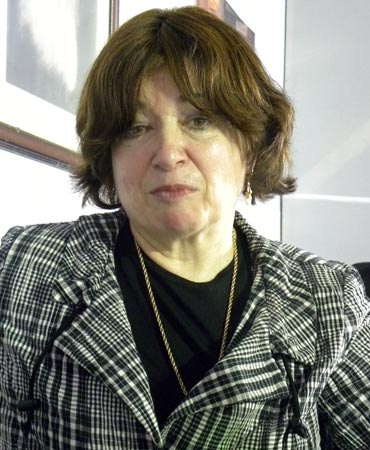 "It was hard (for him to adjust initially). But he came to like the (Indian) people. He never wanted another job. He was never planning to go anywhere else."

The little boy who survived the attack on his home, Freida Holtzberg tells you, is doing wonderfully.

"Moshe," she says through Aimee, "is doing very well. Sandra is settling in. She has given up her life over here so she can be there with Moshe. Moshe is thriving. He is going to school. He is a happy boy. He laughs, he smiles, he plays, he remembers his parents all the time. We tell him that god needed them (his parents) and took them to him. And they are with god."

Moshe, who is nearly four, lives with Rivka's parents, the Rosenbergs, in Afula, north Israel, along with his nanny and guardian angel Sandra Samuel, who has been granted honorary Israeli citizenship.

The Holtzbergs visit Afula often to be with their little grandson. 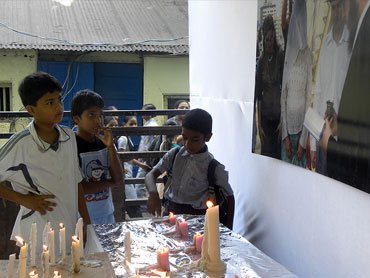 Image: Colaba children gaze at the candles lit in memory of Gavriel and Rivka Holtzberg
Photographs: Vaihayasi Pande Daniel/Rediff.com
"He (Moshe)," murmurs Freida, smiling widely, "looks exactly like my son. But the eyes are his mom's. All the rest is his dad's. His behaviour is exactly like his dad's."

"When he was two years old he knew the Hebrew alphabet, the English alphabet and all the numbers. He is smart."

Freida makes the very Indian, but obviously also Jewish gesture of tuh, tuh, tuh..., erasing what she said, lest she spoke too soon and it attracts ill luck.

"The family will decide if he will live in Israel or in New York as he grows. Now it is nice if he is in Israel and is speaking Hebrew and all of that. As he grows it will become clear. Right now he is with Sandra. It is cold in America. Why not be in Israel if he can be in Israel?"

When Moshe grows up, he could well be bound for the city where he was given a second chance to live.