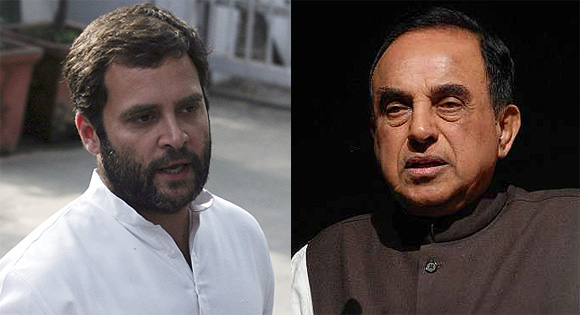 What makes A K Antony shiver...

Catch up on the latest gossip from Delhi.

It seems to be a curious case of eating one's words.

Why else has Rahul Gandhi backed out from taking legal action against maverick politician Subramanian Swamy?

After all, Rahul's office had initially threatened to sue Swamy over the Associated Journal-Young Indian controversy.

Then, the Congress's in-house legal eagle Abhishek Manu Singhvi -- who had quit his post as Congress spokesperson after a controversial CD row and has been recently reinstated -- pointed out that personal appearances in court are mandatory in a defamation suit.

Moreover, during the trial, Swamy could avail the option of cross-examining Rahul and Sonia Gandhi.

The Gandhis, since then, seemed to be giving the matter a serious second thought.

Click on NEXT to find out what the Congress is most worried about...

After its rally at the Ramlila Ground on November 4, the Congress high command is searching for a new destination to hold its pro-FDI rally.

Though Lucknow, Guwahati, Hyderabad, Kolkata, Bengaluru, Mumbai and few other state capitals had been shortlisted, Sonia and Rahul Gandhi are not satisfied.

The reason for their reluctance is rooted in the numbers that the Delhi rally, spearheaded by Delhi's Sheila Dixit, Haryana's Bhupinder Singh Hooda and Rajasthan's Ashok Gehlot, managed to generate.

Rahul, who tends to veer towards the pragmatic say those who know him well, reportedly wants to know if the combined strength of three chief ministers could not bring in one lakh supporters, how would Tarun Gogoi (Assam), Prithviraj Chavan (Maharashtra) and Kiran Reddy (Andhra Pradesh) ensure the rallies are well attended in their capitals?

Lucknow (where the Congress was drubbed by present chief minister Akhilesh Yadav's Samajwadi Party in the assembly polls) and Kolkata (West Bengal's chief minister, the fiery Mamata Banerjee, no longer supports the Congress) have also been rejected for obvious reasons.

Which doesn't leave the Congress with too many options, does it?

Click on NEXT to find out what makes Defence Minister A K Antony shiver... 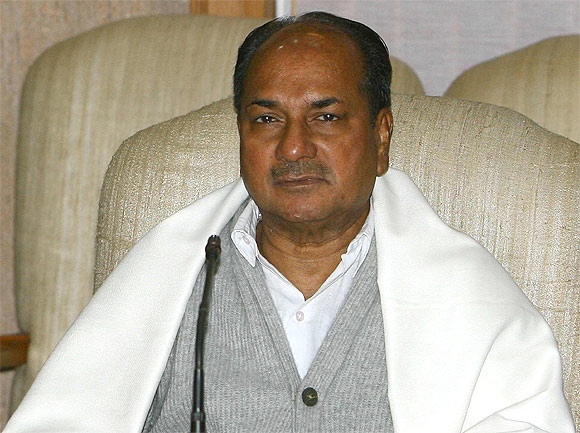 Image: Defence Minister AK Antony gets ready for his next battle.
Photographs: B Mathur/Reuters

Winter is yet to make its annual appearance in the national capital, yet it has already started showing its effect on the city's politicians.

It so happened that Defence Minister AK Antony did not show up at the scheduled time for a recent Cabinet meeting.

The otherwise punctual raksha mantri was late by half-an-hour.

Through he was not asked to explain the reason behind the delay, the probity-conscious Antony immediately said he was undergoing an Ayurvedic massage treatment to ward off the ill-effects of Dilli's sardi!

Click on NEXT to find out what the wily N D Tiwari is upto... 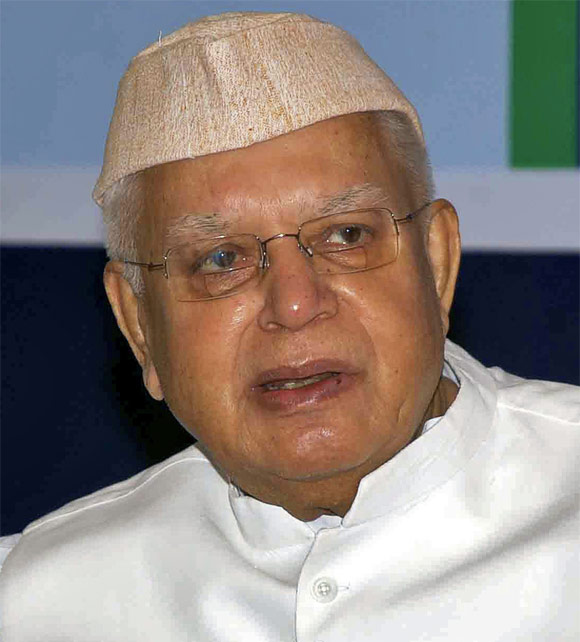 Politics is such an irresistible intoxication; sadly, for those who are afflicted, it's almost impossible to give it up.

The latest to prove this adage is the veteran Congress leader Narain Dutt Tiwari.

The 87-year-old has been forced by the courts to accept Rohit Shekhar Sharma as his son; the resulting negative publicity during and after the case, which was filed by his son, saw the Congress wash its hands of him.

The former Uttarakhand chief minister refuses to give up; now, he wants to stage a political comeback.

Tiwari -- who was three times chief minister of Uttar Pradesh and a towering Congress leader until a bitter paternity suit and sex scandal at the Hyderabad Raj Bhavan tainted his image -- wants to contest 2014 Lok Sabha polls.

Tiwari has sent feelers to Sonia Gandhi, who he was once close to, but the Congress is in no mood to oblige him.

But the wily politician in him refuses to give up – he is also negotiating with the Samajwadi Party, which has pockets of support in the Uttarakhand.