Sign in  |  Create a Rediffmail account
Rediff.com  » News » The stark contrast between two ministers comes to the fore 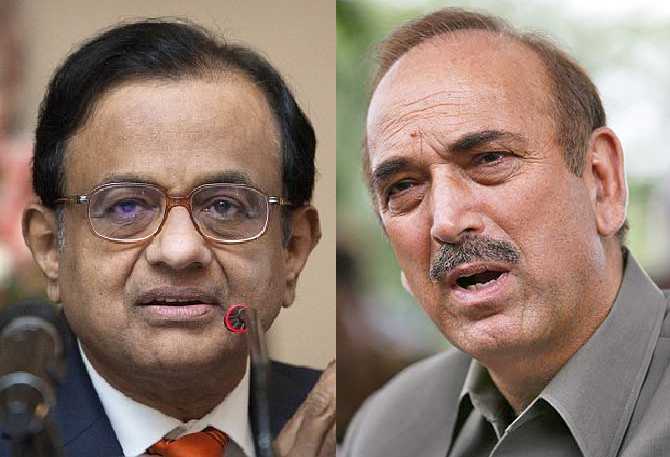 While the Union finance minister has opted out of the election race -- one of the many Congress bigwigs who are not very confident of their electoral prospects this time around, Ghulam Nabi Azad has volunteered to contest from the Udhampur seat even though he is a sitting Rajya Sabha member.

Anita Katyal reports on the Congress’ fourth list of Lok Sabha candidates that was released late on Thursday night.

The stark contrast between Union ministers P Chidambaram and Ghulam Nabi Azad was self-evident when the Congress released its fourth list of 50 Lok Sabha candidates on Thursday night.

While Chidambaram stood his ground and opted out of the upcoming electoral battle, Azad volunteered to contest next month’s election even though he is a sitting Rajya Sabha member.

Azad will contest the Udhampur seat in Jammu and Kashmir while the finance minister’s son, Karti Chidambaram, was nominated from his father’s constituency Sivaganga in Tamil Nadu.

Chidambaram figured in the long list of Congress leaders, especially ministers and state unit presidents, who wanted to sit out this election or were scouting around for a safe constituency because they were not confident about winning back their old seat.

While Congress vice-president Rahul Gandhi put his foot down and insisted that everybody contest from their current constituencies, a few exceptions have been made.

Chidambaram falls in this category. The finance minister had made it known for some time now that he did not wish to contest this election and suggested that his son be given a ticket instead. Congress president Sonia Gandhi and other senior party leaders tried to persuade Chidambaram to change his mind but to no avail. 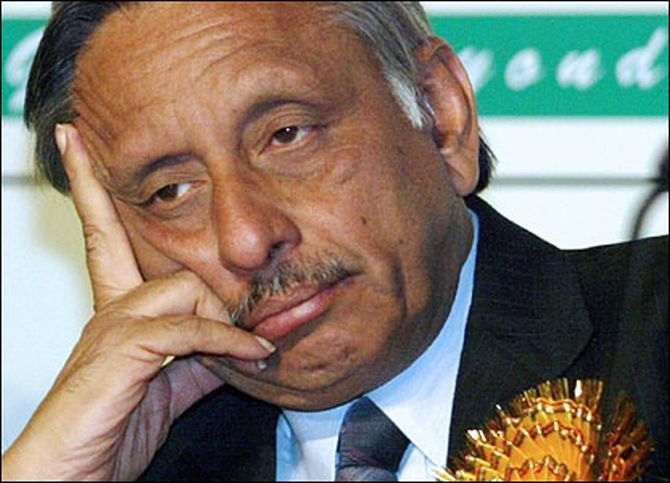 According to reports from Tamil Nadu, Chidambaram found himself on a shaky wicket in Sivaganga as his bête noire, state Chief Minister J Jayalalithaa, has declared that she would ensure his defeat.

However,the “Jaya factor” has not deterred the indefatigable Mani Shankar Aiyar, who has decided to take the plunge even though he is a nominated member of the Rajya Sabha. He will contest from his old seat Mayiladuthrai.

While Chidambaram managed to have his way, his colleague V K S Elangovan, former minister and president of the Tamil Nadu Congress Committee, was not that lucky. Elangovan, too, did not wish to contest this election but he was obviously not persuasive enough. He will be contesting from Tiruppur constituency.

In contrast to Chidambaram, Union Health Minister Ghulam Nabi Azad volunteered to enter the electoral fray from Udhampur although he did not contest the last election and was subsequently elected to the Rajya Sabha.

The Congress leadership believes that Azad’s presence will help improve the party’s prospects in Udhampur and the adjoining constituencies in Jammu and Kashmir. At the moment, the Bharatiya Janata Party has a clear edge in the Jammu region, an area where the Congress also has a substantial presence.

However, the Congress finds itself at a distinct disadvantage because of the Narendra Modi factor and the anti-incumbency against the United Progressive Alliance government at the Centre and the Congress-National Conference government in the state.

Tewari unlikely to get a 'breather' outside Ludhiana 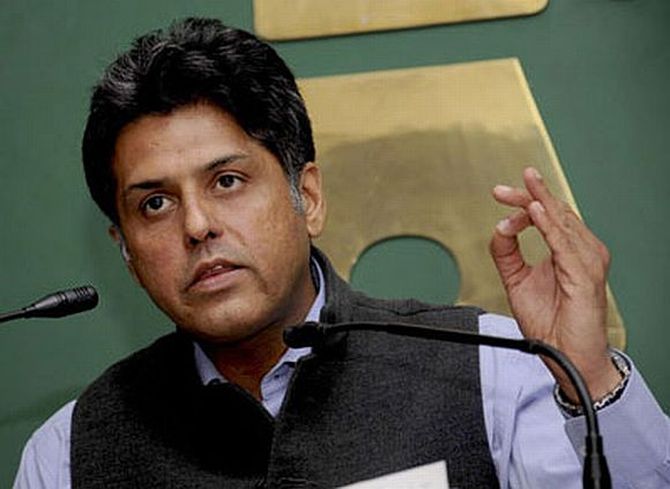 Although Information and Broadcasting Minister Manish Tewari has been eventually been persuaded to contest from his present constituency Ludhiana, his name did not figure in Thursday’s list. Nervous at the prospect of a defeat, Tewari had been eyeing the Chandigarh seat but the party high command decided to re-nominate sitting MP Pawan Kumar Bansal. Tewari is now all set to launch his campaign in Ludhiana on Friday with a road show.

His candidature is learnt to have been delayed because the Congress leadership is still struggling to find a high-profile candidate for the Amritsar seat to take on BJP’s Arun Jaitley. It has been suggested that former Punjab chief minister Amarinder Singh be fielded against Jaitley but the former is not keen on contesting.

Amarinder Singh, who was called to Delhi in this connection, is learnt to have conveyed this to Congress president Sonia Gandhi on Thursday.

Cong yet to finalise on the 'counter-Modi' candidate 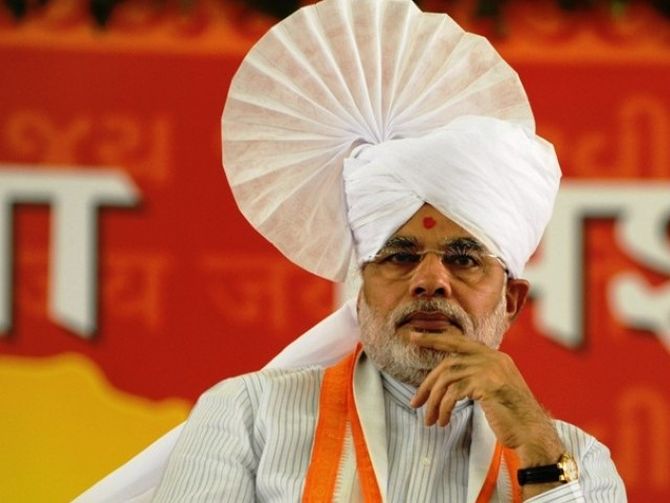 The Congress is still to zero in on a formidable candidate to battle it out against BJP’s prime ministerial candidate Narendra Modi Varanasi.

A number of Congress leaders, including Digvijaya Singh and Anand Sharma, have been quoted as saying that they would be willing to contest if they were asked to do so by the party. But these public declarations don’t count for much as Digvijaya Singh has been elected to the Rajya Sabha only recently while Anand Sharma has never contested a Lok Sabha poll.

While Digvijaya Singh has taken the Rajya Sabha route, his brother Laxman Singh, who had defected to the BJP and then returned to the Congress fold, will take on the saffron party’s Sushma Swaraj in Vidisha, Madhya Pradesh.

The Congress also decided not to take any risks in Delhi and nominated all its sitting MPs. While the names of five candidates figured in the last list, the remaining two -- Mahabal Mishra from West Delhi and Ramesh Kumar from South Delhi -- were announced on Thursday.