Those who raised anti-national slogans at JNU deserve jail: Shah

The BJP chief also said that Ram temple will be built in Ayodhya in four months. 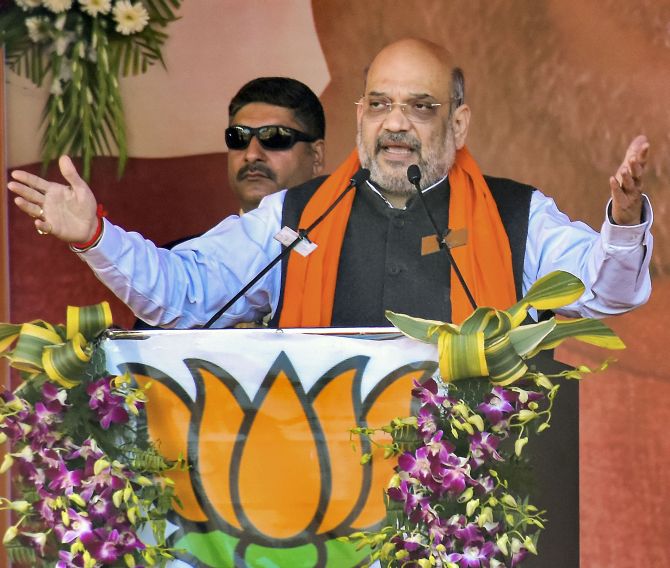 Addressing a public meeting in Jabalpur in Madhya Pradesh in support of the new citizenship law, Shah said, "In JNU, some boys had raised anti-national slogans. They raised slogans like 'Bharat tere tukde honge ek hazar, inshallah, inshallah'. Should they not be put in jails?"

Amid cheers by people, Shah said, "Rahul Baba and Kejriwal are saying- save them, save them....Are they your cousin brothers?"

Shah, however, didn't mention the exact timeline of the alleged sloganeering in his speech.

A case had been registered by Delhi police against then JNU Students' Union president Kanhaiya Kumar and several others, for being involved in an event at the university on February 9, 2016, in which anti-India slogans were allegedly raised.

Shah also said however much the Congress opposes the Citizenship (Amendment) Act (CAA), the government 'will not rest' until all the refugees from minority communities from Pakistan are given Indian citizenship.

He once again challenged Congress leader Rahul Gandhi and West Bengal Chief Minister Mamata Banerjee to show him any provision in the new legislation that will snatch the citizenship of any citizen in the country.

"I am saying it loudly. You Congress leaders, listen carefully...Oppose it as much as you can, but we will rest only after giving citizenship to all these people. No one can stop us from doing so.

"Hindu, Sikh, Buddhist and Christian refugees from Pakistan have as much right over India as you and I have. They are the sons and daughters of India. The country will embrace them," Shah said while addressing the meeting.

His statements come a day after the Congress demanded immediate withdrawal of the CAA and stopping the process of National Population Register (NPR), accusing the government of using brute majority to impose its 'divisive' and 'discriminatory' agenda.

As per the gazette notification issued by the Centre on Friday, the CAA, under which non-Muslim refugees from Pakistan, Bangladesh and Afghanistan, will be given Indian citizenship, came into force from January 10.

"I challenge Rahul Baba and Mamata Banerjee, tell me if there is any single provision in CAA that is meant for snatching anybody's citizenship," he said.

"There is no provision for taking away anyone's citizenship. The Act in fact is meant for giving citizenship," the minister said.

During the last assembly elections in Rajasthan, the Congress had promised in its poll manifesto that Hindu and Sikh refugees from Pakistan would be given Indian citizenship.

"But now they are opposing the BJP...(Rajasthan Chief Minister Ashok) Gehlot ji, check your manifesto," he said.

The Bharatiya Janata Party chief also said that Ram temple will be built in Ayodhya in four months.

"The complex would be so high that it would touch the sky," Shah said. Shah unveils 5.5 lakh 'thank you' letters to PM on CAA