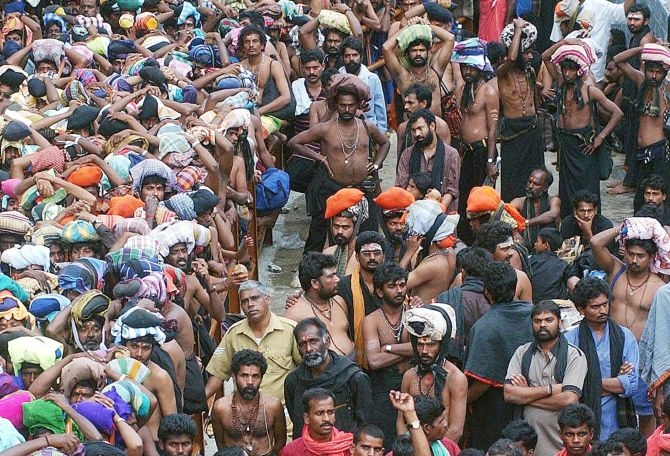 IMAGE: 'When a man can enter, a woman can also go. What applies to a man, applies to a woman also,' the bench said. Photograph: E V Deepak/Reuters

The Supreme Court on Wednesday said women have the constitutional right to enter Sabarimala temple in Kerala and pray like men without being discriminated against.

A five-judge Constitution bench headed by Chief Justice Dipak Misra, which is hearing a petition challenging the decision of the Devaswom board banning entry of women of age group 10-50 years, said that even if there was no law, the women cannot be discriminated against with regard to offering prayer in a temple.

"When a man can enter, a woman can also go. What applies to a man, applies to a woman also," the bench also comprising justices R F Nariman, A M Khanwilkar, D Y Chandrachud and Indu Malhotra observed.

"The right to enter a temple is not dependent on a legislation. It is the constitutional right," the bench said, adding that this right is enshrined under Article 25 and 26 of the Constitution.

The top court was informed by the Kerala govt that it also supported the entry of women of all age groups in the temple.

The bench then referred to the contrary affidavits of the Kerala government which had in 2015 had supported the entry of women but made a U-turn in 2017 and opposed the entry.

The counsel for the Kerala government said that it would go by its first affidavit and support the cause of women.

"You are changing with the changing times," the bench remarked.

Senior advocate Indira Jaising, appearing for one of the intervenors, assailed the practice and said that the ban on the entry of women of certain age groups was violative of various fundamental rights including Article 17 which deals with untouchability.

She also referred to the definition of term Hindu under various statutes and said that the women were discriminated against not on the ground of sex but because of menstruation.

Senior advocate Raju Ramchandran, who is assisting the court as amicus curiae, supported the entry of women into the temple and said that denial of the right to entry of women was violative of fundamental rights.

The hearing on the plea filed by petitioners Indian Young Lawyers Association and others, remained inconclusive and would continue on Thursday.

The apex court had on October 13 last year referred the issue to a Constitution bench after framing five 'significant' questions including whether the practice of banning entry of women into the temple amounted to discrimination and violated their fundamental rights under the Constitution. 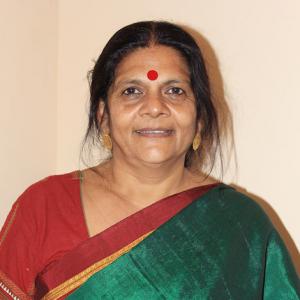 The inspiring story of women's empowerment in rural India 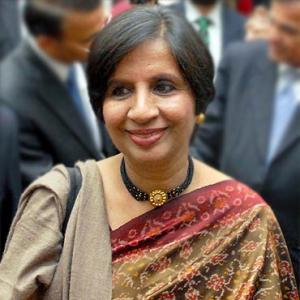