Amit Shah requested Adityanath to tighten the reins of the HYV's activities, now that he was CM.
But Adityanath is not prepared to let go so easily.
Aditi Phadnis reports. The first compromise people noticed was the food.

Yogi Adityanath is a mahant, a holy man. He is prohibited, for pollution-purity reasons, from eating just anywhere. As MP, he would be invited by voters and constituents for meals and his supporters would warn them in advance: 'Maharajji khana nahin khayenge....' He might have a piece of fruit or a nut or two, but nothing more.

Now, along with Bharatiya Janata Party President Amit Anilchandra Shah, the mahant of the Gorakhnath temple is eating everywhere: You can see him squatting and eating with Yadavs, Dalits... Unthinkable in the past. But he has to.

His supporters can see that a crucial rule has been broken. He explained gruffly to one of them that he was no longer just a mahant of the Gorakhnath mandir but chief minister of the entire state and all people.

When he was made chief minister, Prime Minister Narendra Damodardas Modi was asked by a cheeky supporter: 'Why him?' The PM replied: 'iss lot mein sabse achha wahi hai (,em>he's the best of the lot).'

There was Keshav Prasad Maurya, now deputy chief minister and reportedly not on talking terms with the CM; Manoj Sinha, Union minister of state for railways with independent charge of the ministry of communications; and somewhere on the remote horizon, Adityanath.

The Gorakhpur Lok Sabha seat is considered "mandir ki seat". But previous incumbents -- Digvijaynath and Avaidyanath -- never tried to assert themselves as 'true' Hindus although they claimed to represent the Hindu Mahasabha and considered the BJP somewhat tame on issues of Hinduism.

Adityanath realised that to be taken seriously, he needed to make an impression within the BJP.

In the 2002 assembly election, the BJP fielded Shiv Pratap Shukla from Gorakhpur overruling claims from the mandir.

Adityanath was incensed and he challenged the BJP by fielding Radha Mohan Das Agarwal on a Hindu Mahasabha ticket against Shukla. Agarwal defeated Shukla.

This established Adityanath as the unchallenged BJP leader in east UP and to buttress his rise, he announced the formation of the Hindu Yuva Vahini.

Why HYV when the Akhil Bharatiya Vidyarthi Parishad and the Bharatiya Janata Yuva Morcha, both front organisations of the BJP, already exist? A BJP supporter explained that the HYV is slightly different.

While the ABVP and BJYM are more "prabuddh (intellectual)" and "vaicharik (ideological)", the HYV is considered "lampat (lumpen)", more interested in creating "danga (rioting) than ideology.

In other words, a militia.

Anecdotal data suggests membership grew from 300 in 2002 to 1.5 million in 2014. In a region where large-scale unemployment and migration in search of jobs is endemic, young people now had a position.

In the Gorakhpur division alone, 500,000 people joined the HYV as it expanded to the villages.

The volunteers had a range of tasks: From spreading awareness about encephalitis or brain fever that kills people like flies in the region to issues of sanitation.

"Earlier, when you asked a young man what he did, he would say "nothing". Now he began saying proudly: "I am a padadhikari (officebearer) of the HYV," explained a BJP worker.

The BJP observed the HYV's growth and development silently but watchfully. When Adityanath was sworn in as CM, many celebrated, expecting a surge in their fortunes. They were disappointed.

The first three things Adityanath did as chief minister was a harsh crackdown on the sand mining mafia (which was run as a side-business by many HYV activists); action against overloading of trucks (which were allowed to go only if they paid a 'tax' to the HYV); and shutting down illegal hooch outlets.

State president Sunil Singh quit, followed by Ram Laxman, a crucial activist who is also a Dalit. Singh told local journalists that the BJP lost the Gorakhpur by-election in 2018 because HYV workers stayed away from the campaign.

A BJP worker said Amit Shah requested Adityanath to tighten the reins of the HYV's activities, now that he was CM.

But Adityanath is not prepared to let go so easily.

On the day the 2019 elections were announced, the state government issued a notification appointing scores of HYV activists to positions on boards and other lower-level offices of profit.

Although the model code of conduct came into force immediately, delaying the perks of office (authority, salary and official car and accommodation), once the election is over, they will take over.

"In the BJP we have a system. We send the name from below and it is vetted at every stage reaching the leadership via proper channel," said a BJP worker. "In this case, none of the names we sent featured on the list that was finally announced."

How will this creative tension play out?

BJP supporters say whatever Adityanath and the HYV might say, there's a price to be paid for power. Their prediction?

The HYV, the source of Adityanath's clout, will eventually have to shut shop. 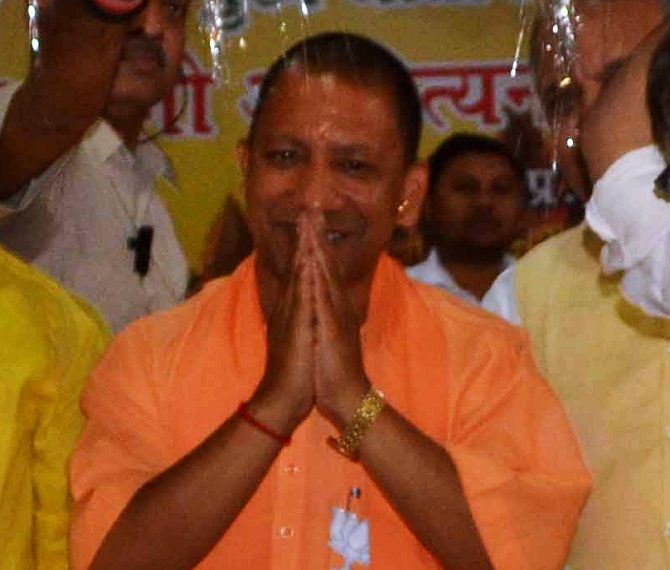 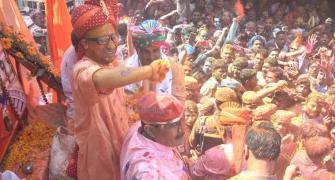 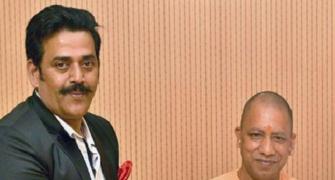