The ruling party is worried as the alliance represents over 50 per cent of the state’s population, reports Virendra Singh Rawat. 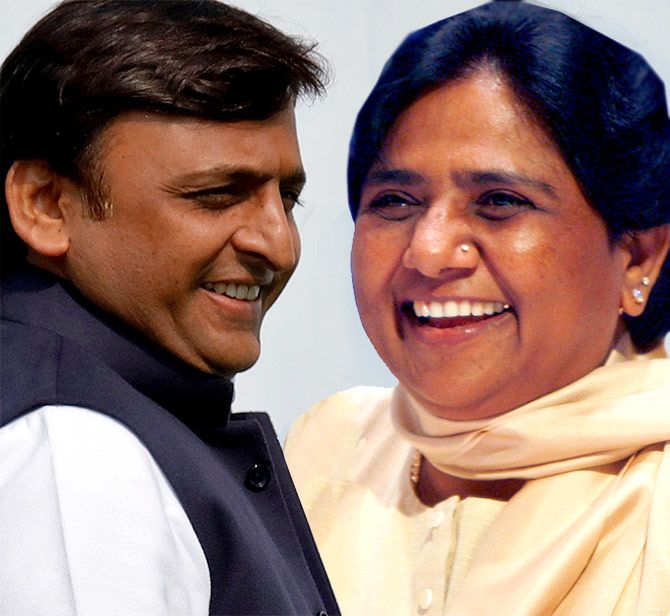 IMAGE: The chemistry between Akhilesh Yadav and Mayawati's parties has started to evolve and the victory of the SP candidates in the Gorakhpur and Phulpur bypolls is proof of that. Photograph: Reuters

On November 5, 2016, Bahujan Samaj Party president Mayawati had convened a press conference at her Lucknow residence, where she categorically ruled out an alliance with the Samajwadi Party in the run-up to the Uttar Pradesh assembly polls in 2017.

She had, in fact, cautioned other parties against having any truck with the socialist outfit, claiming it would benefit the Bharatiya Janata Party.

She was responding to Bihar Chief Minister Nitish Kumar’s suggestion to UP parties to forge an alliance on the lines of the “mahagathbandhan” in his home state to stop the BJP juggernaut. Mayawati said the SP could not be trusted because it had ditched the Bihar grand alliance before the election, and went to the extent of reiterating her allegation that the SP had a tacit understanding with the BJP.

Cut to March 2018: The same BSP announced supporting the SP candidates in the Gorakhpur and Phulpur Lok Sabha bypolls to defeat the BJP. The alliance trumped the saffron party candidates in both the seats. Soon enough, she announced the alliance would hold for the 2019 Lok Sabha polls, too.

Last year, the BJP had handed a crushing defeat to both the parties in the assembly polls. The SP’s tally was reduced from 224 to 47, and that of the BSP from 80 to 19, while the BJP and its allies won 325 of the 403 assembly constituencies.

The existential crisis faced by the two regional heavyweights has forced them to close ranks by consolidating their core Dalit and Other Backward Class votes.

However, while the top leaderships of the two parties are optimistic, there have been apprehensions of the tie-up sustaining at local levels, where the core voters of these two outfits have not been known to have cordial relations.

This is not the first time that the two parties have come together. They had forged an alliance in 1993-94 under the leadership of the SP’s Mulayam Singh Yadav and BSP founder Kanshi Ram. However, the BSP withdrew support to the Mulayam Singh Yadav government, which led to the Lucknow Guest House incident on June 2, 1995, when SP leaders attacked Mayawati before she was rescued by a BJP legislator.

This incident had caused a deep divide between the two parties, with Mayawati vowing never to ally with the SP.

Over the past two decades, the two parties tasted power multiple times while continuing to nurse antipathy towards each other. Nonetheless, they largely represented the binary of the UP polity while relegating the Congress and the BJP to the fringes. However, the phenomenon now referred to as the “Modi wave” in the run-up to the 2014 Lok Sabha polls changed the dynamics of national politics, including UP, for good.

The ruling BJP is rattled by the robust combine since the two represent over 50 per cent of the state’s population.

Social historian Badri Narayan said the SP-BSP combine was bound to grow stronger. “The chemistry between the two parties has started to evolve and the victory of the SP candidates in the Gorakhpur and Phulpur bypolls is proof of that. There is still a year to go before the next Lok Sabha poll but the two parties have realised that it is in their best interest to join hands for the bigger cause of defeating the BJP.”

Recently, Mulayam in a public meeting waxed eloquent on the alliance, saying if the two parties agreed on ticket distribution, it would prove to be unassailable. The reference to the distribution of tickets, in fact, holds the key to the success of the alliance.

The BJP, on its part, has been trumpeting the Guest House incident. But Mayawati has taken the sting out of that by saying the incident had happened when Akhilesh Yadav, now head of the SP, was not in politics and hence had no role in it.

According to sources, the two parties could broadly settle on the formula of contesting the constituencies in which they had stood second in 2014. However, this is still to be ratified by their top leadership before a formal decision is taken.

Another important aspect is whether the Congress would be included in the alliance. But since the Congress, under the leadership of Rahul Gandhi, is looking to revive its old fortunes, it would be unwilling to play second fiddle.

SP leader Sudhir Panwar, who had contested the 2017 assembly poll from Shamli district in western UP, said the cadres of both the parties had started synergising. “Since the SP and BSP have been out of power, there is not much to lose for them and there is not much conflict between their respective grassroots cadres and leaders.”

However, he said the caste profiles of the two parties could pose some challenge.

“Over the past 20-22 years, the Dalits in UP have been empowered. Their socioeconomic status has gone up while that of the Other Backward Classes has diminished and as such there is not much difference between their socioeconomic profiles in villages.”

The BJP is reportedly unwilling to give a ticket again to many of its MPs. This partly explains the revolt by several Dalit MPs and their highlighting of atrocities against the community and the conspiracy to weaken the Scheduled Caste/Scheduled Tribe Act.

“In such circumstances, Dalit leaders of the BJP who fear not getting the ticket again would have the option of entering or re-entering the SP and BSP... At the same time, the Dalit voters these leaders would be more comfortable in favouring them in the poll if they don the BSP or the SP colour,” he explained.

Meanwhile, Akhilesh is showing maturity by being more accommodative of the BSP in his public utterances and rhetoric vis-à-vis Mayawati, who holds on to her signature style of being abrasive and unsparing in her speeches and statements. 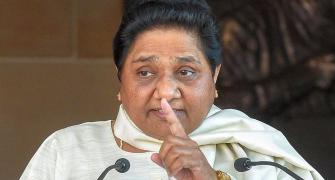