News
Business
Movies
Sports
Cricket
Get Ahead
Money Tips
Shopping
Sign in  |  Create a Rediffmail account
Rediff.com  » News » 26/11 case: Why India didn't implead itself against ISI in US

26/11 case: Why India didn't implead itself against ISI in US

Was it plain red tape or lack of direct evidence against the ISI which prevented India from being part of the suit before the US court? Vicky Nanjappa finds out.

The immunity granted to Pakistani spy agency Inter Services Intelligence by the United States of America in the 26/11 attacks lawsuit throws up an important question: should India have impleaded itself in the case as it had been saying it would do since the past two years?

Was it plain red tape or lack of direct evidence against the ISI which prevented India from being part of the suit before the US court? A lawsuit had been filed before the court in the US by the victims of the 26/11 attacks in Mumbai, where 166 people lost their lives, in which they had accused the Lashkar-e-Tayiba, the ISI and two former directors of the Pakistan spy agency, Ahmed Shuja Pasha and Nadeem Taj, of being part of the conspiracy.

The US in its submission to the court had pointed out that the ISI is entitled to immunity as it is part of a foreign state within the meaning of the Foreign Sovereign Immunities Act. Also it was submitted that the two former directors of the ISI were immune since the allegations relate to acts which took place in their official capacity.

When this lawsuit was initially filed India had said that it was debating on whether to be part of it. The experts would feel that India should have been part of this suit as it could have made its claim against the ISI stronger before the US court based on which it could have nailed the spy agency.

However, the thinking was different in the Indian government and it never went up before the US court and impleaded itself in this suit.

Highly placed sources in the government machinery say that it was expected that the US would make such a submission in favour of the ISI as it is determined by its national interest.

"However not everything is lost as it is only a submission and it is for the court to take a final call in the matter and we shall await that verdict," the official says.

"More importantly we need to first ask ourselves whether we have implicated the ISI and the two former directors in the cases that are going on over here. We have not done so as yet and this point to the fact that we are still collecting direct evidence against the Pakistan spy agency and going to the US court without direct evidence would have meant that we came back with egg on our face," points out C D Sahay, former chief of the Research and Analysis Wing.

Sahay says that if one looks at the matter with a legal perspective the case going on in the US for a crime committed in India itself should have been a sufficient ground for us to be part of that case.

"It should have been the collective responsibility of both the ministry of home affairs and the ministry for external affairs to take a decision on that."

Sources point out that the evidence against the ISI and its two former directors are based on what India have collected through the confessions of several accused in the case.

"The evidence we have also is very much based on what the media reports have to say apart form the statements handed over to us by the US in respect of David Headley. We still need to collect more evidence which is direct in nature in order to produce it before a court of law. Had we gone to the US court with the evidence we have on hand in respect of the ISI, Shuja Pasha and Nadeem Taj, it could have been rejected and that would have marked the end of the road for us. Moreover we knew all along that the US would make a submission to this effect like it did as it involves their foreign policy," the official says.

During the various discussions and deliberations that were held in New Delhi regarding the role India had to play in this case, it was decided to wait and watch as to what happens in the US court. India felt it would be better to draw out its own evidence at first and then implicate these persons in India instead of riding piggy back on the US, India decided that it would conduct a trial in absentia against the ISI and the two directors and then make its case out before the US.

India also says that it could submit proof to the US court during an appeal, if the plaintiffs decide to file one.

Indian officials who are upset, however, do not rule out the fact that they did not see this one coming. The ISI and its bosses had made a dash to the United States once this case had been filed and they have managed to obtain the required protection.

Acting against the ISI would be fatal to the US as the agency does pursue a lot of its interests in the South Asian region, Indian officials point out.

The US had made it very clear to the ISI that they would not want the Lashkar-e-Tayiba or its cronies to act against US interests, sources add. 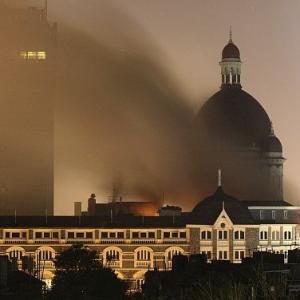