News
Business
Movies
Sports
Cricket
Get Ahead
Money Tips
Shopping
Sign in  |  Create a Rediffmail account
Rediff.com  » News » Why did 100 whales get beached in Tuticorin?

Why did 100 whales get beached in Tuticorin? 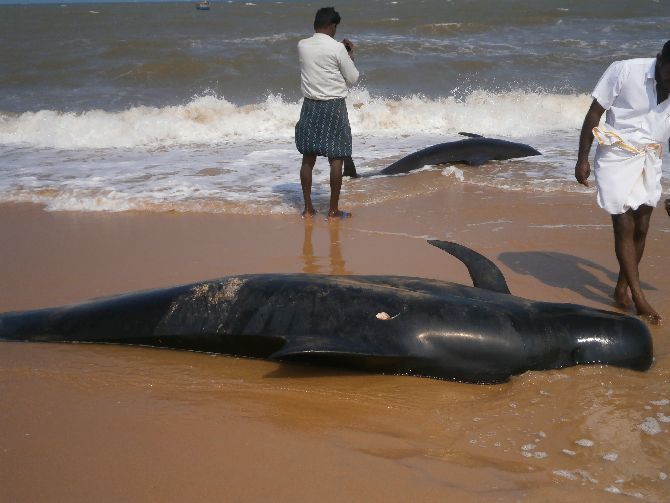 IMAGE: Some of the beached whales. Photographs: A Ganesh Nadar/Rediff.com

A Ganesh Nadar/Rediff.com spends a day at the Manapaddu beach in Tuticorin where nearly 100 whales were mysteriously beached and many died despite the best efforts of the fishermen and the authorities.

Over 100 small whales were washed ashore in the early hours of January 12 in Manapaddu village, Tuticorin district, Tamil Nadu. Local fishermen woke up to see the strange sight of whales floating onto their beach and dying. Nearly 45 whales died on the beach.

Manapaddu is a fishing village about 15 kilometres from the Tiruchendur temple in Tuticorin.

The fishermen said they tied a few whales to their fibre boats and pulled them back into the sea. But the whales kept getting washed back to the beach.

The local police, the fisheries department, revenue department and forest department of Tuticorin district gathered on the beach to try and find out what happened. So far they have been unable to ascertain the reason for this unusual behaviour of the whales who normally inhabit deeper waters and never venture near the shore.

Fishermen say they have seen the whales when they go fishing far into the sea. "I have never seen any of these within 40 kms of the shore," says one young fisherman.

"This is not the first time this is happening," says Pichai, an elderly fisherman from the village. "It happened in 1974. Whales were washed ashore and died. At that time too, no one knew why."

Another fisherman blames the Koodangulam nuclear plant in neighbouring Tirunelveli district. "They are releasing hot water into the sea and that must have killed the whales," he insists.

"We have taken tissue samples of the whales," says government veterinary doctor S Suresh, who works in this district. "Till we analyse them in the laboratory we cannot guess the reasons for their death." 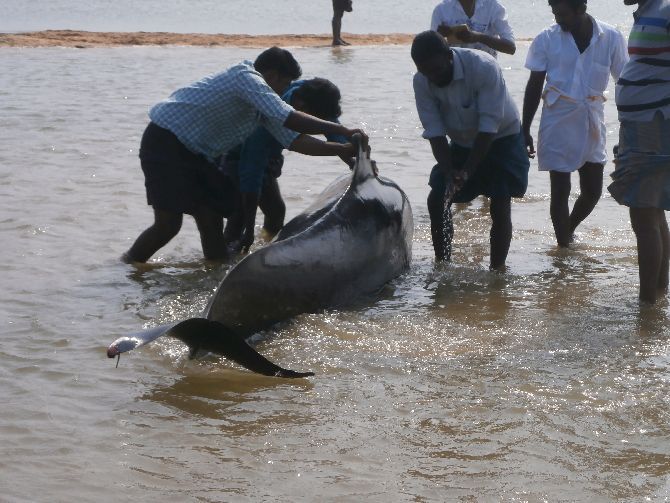 IMAGE: Fishermen try to push a whale back into the sea.

"These whales move around in groups," Dr Jairaman, joint director, animal husbandry, Tuticorin district, tells Rediff.com. "So if one makes a mistake the others will just follow them. The whales have come here by mistake. Temperature fluctuations because of the recent heavy rains might have caused them to come here. There might have been changes in the currents in the deep ocean which they might have followed."

"Their death cannot be due to intoxication or any poison," says Dr Jairaman, "because then other fish would have also died due to the same reason."

The scenes on the beach were horrifying. Most of the whales had already died, some were still twitching in despair. Some fishermen were trying to push them back into the water in vain, though most had given up.

On the beach a horde of tragedy tourists were taking photgraphs with the whales in the background.

Government officials had come with earth-moving machines which were pushing the whales to one end of the beach, where presumably they will be buried. Local fishermen requested the officials to bury the whales further away from their village.

The beach, overlooked by a lovely church and a lighthouse, looked like a graveyard for the whales.

Ensure RBI is not seen as paper tiger: Rajan to staff 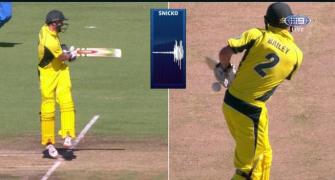 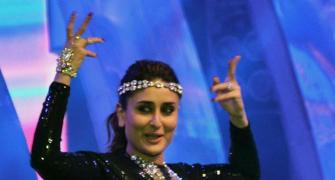 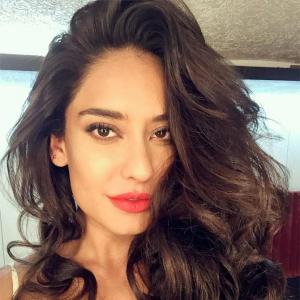 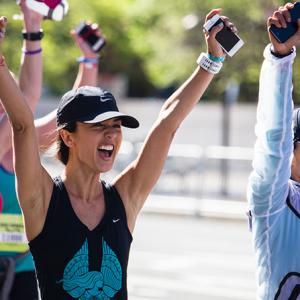 7 things you should do to change your life