News
Business
Movies
Sports
Cricket
Get Ahead
Money Tips
Shopping
Sign in  |  Create a Rediffmail account
Rediff.com  » News » Why AIADMK is in a catch-22 situation

Why AIADMK is in a catch-22 situation The AIADMK government in Tamil Nadu doesn’t really want to antagonize Karnataka in any way that could have any sort of bearing on the case against party chief Jayalalithaa. However, it is under pressure back home over backing a farmers’ bandh call against check dams being proposed by the neighbouring state. Rediff.com contributor R Ramasubramanian reports.

The ruling All India Anna Dravida Munnetra Kazhagam is in a tight spot over whether it should support a statewide shutdown called by the coordination committee of all farmers associations on Saturday in Tamil Nadu.

The farmers are protesting the proposed construction of two check dams at Megatadu across the Cauvery river by Karnataka, which they fear will ruin and destroy agriculture in the state.

On Friday, Chief Minister O Panneerselvam moved a government resolution in the assembly urging the Centre to immediately intervene and stop Karnataka from proceeding with the project.

Describing the inevitable terrible hardships of Tamil Nadu farmers would face if the proposed check dams are constructed, the resolution also reminded the central government that until the Cauvery Management Board is constituted to implement the final award of the Cauvery River Water Tribunal, activities like this shall not be allowed under any circumstances.

Interestingly, the tone and tenor of the resolution was soft and this was in total contrast to the earlier resolutions adopted by the previous AIADMK governments headed by Jayalalithaa.

During the assembly debates on Friday, the Dravida Munnetra Kazhagam pressurized the AIADMK to support the bandh.

“We know as government, you cannot participate in the bandh. But as a political party the AIADMK can participate. Hence, we request you to support it in the interest of the farmers and there is no legal bar for this. So let us not have assembly session on Saturday,” said DMK deputy leader of the floor and former PWD minister Durai Murugan.

Though he did not elaborate, Durai Murugan was referring to a 2007 Supreme Court ruling wherein the Apex court had banned a bandh proposed by the then DMK government against what it perceived as slackening in the Sethusamudhram Project works.

Initially, when the House rose for the day, the Speaker announced that it will function as usual on Saturday. But later in the night assembly secretary A M P Jamaludeen announced that there will not be an assembly session. He, however, did not mention any reason for it.

The crisis could not come at a more appropriate time for the AIADMK which is almost down and under especially after the conviction of their leader and former chief minister Jayalalithaa.

“We know the seriousness of the issue. Yes, we are getting isolated. After all, we are fast approaching assembly elections. We are paying the price for the political crippling of our leader,” a senior AIADMK leader said on condition of anonymity to rediff.com.

A section of political observers feel that the AIADMK leadership cannot take a pro active stand on the bandh call as they are passing through a crucial phase.

“The stakes are very high. The Karnataka high court is about to pass its final verdict in the Jayalalithaa’s appeal any time from now. Though judiciary is independent, the verdict is going to be delivered in Karnataka and at this juncture neither the AIADMK nor its government can even dream of doing anything which in any way -- leave alone antagonize -- can disturb even slightly the rulers there. Of course, the predicament for the AIADMK is genuine and it could not have come at a more appropriate time. I can say the AIADMK is in a catch 22 situation,” says Nathigam Balu, a senior journalist and political observer.

Meanwhile, the farmers in Tamil Nadu are a worried lot.

“This is a dangerous move by Karnataka. Actually Megatadu is a narrow place with a deep lower river bed. Karnataka, by constructing two check dams across Cauvery at this place, is going to suck at least 10 TMC water every year and they are going to use this for providing drinking water in Bengaluru and for irrigation. So this is also going to expand the irrigation areas of Karnataka,” K V Elankeeran, president of the Veeranam Irrigation Farmers’ Association, told rediff.com.

“If these check dams are constructed, nearly 35 lakh farmers in 11 districts of Tamil Nadu, including from Tanjore, Salem, Cuddalore, Nagapattinam and Dharmapuri, will be terribly affected. The construction of two check dams in Megatadu will expedite the fast evolving major agrarian crisis in Tamil Nadu,” he added 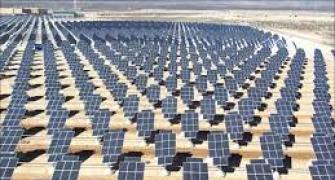 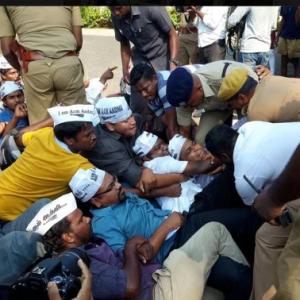 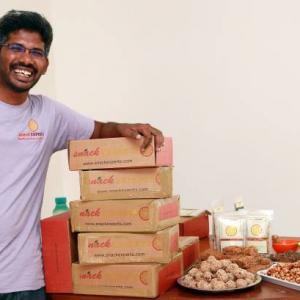