Wherever BJP gets majority, it takes fascist steps: Digvijay

In the wake of arrested IPS officer Sanjiv Bhatt's wife alleging that her husband was being treated like a terrorist by Gujarat police, the Congress on Friday cautioned people against "such fascist steps" if BJP comes to power at the Centre.

"This is how the fascist works. Whatever you see happening in Gujarat today where Bharatiya Janata Party has a majority, you shall see in India, god forbid, if the BJP gets majority in Delhi," party general secretary Digvijay Singh told reporters.

"Wherever BJP gets majority, BJP takes such fascist steps," he said in the wake of Shweta writing a second letter to Union Home Minister P Chidambaram alleging ill treatment to her husband.

At the AICC briefing, party spokesman Manish Tewari struck a similar note. Noting that Shweta's letter makes a "disturbing reading", he said the description of the "inhuman" treatment being meted out to her husband is to send a message to the people "don't you dare".

"Intolerance to criticism and muzzling of dissent are intrinsic to the DNA of the BJP," he said, alleging that the Gujarat government was setting "new benchmarks" in this regard.

He claimed that during the BJP-led National Democratic Alliance regime at the Centre, promoters and journalists of Tehelka were inflicted inhuman treatment for their expose embarrassing the then government.

Tewari said it was for all concerned to reflect upon whether the treatment meted out to the arrested police officer constituted an attack on the "core values of democracy". 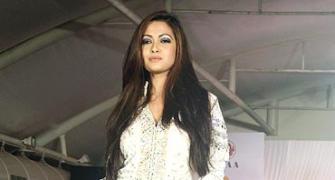