Strongly pitching for a "new pathway" to resolve all issues with India, Pakistan Foreign Minister Hina Rabbani Khar has said that the two sides need to show flexibility and honour commitments made to each other having taken "baby steps" in improving their ties.

India and Pakistan require to build their relationship on "trust" and that sincere efforts must be initiated to ensure that they are able to achieve the "results that we have not been able to achieve so far," Khar told PTI on the sidelines of the East Asia Summit in Phnom Penh.

While asserting that solutions to all the issues must be found through dialogue, she said both sides have to bridge the trust deficit so that on the negotiating table "we don't end up all the time restating the stated position."

"We have done it far too long. I feel that Pakistan sent a very serious message to its friends in India when it decided to move forward on trade," she said, adding the intention behind the message was that it was based on mutual interest.

More importantly ... "we meant business when we said that we want to move forward in a different way that we were going to try and trade on a new pathway," Khar said.

"I feel that there is a strong commitment from both the political leadership to do so. It has been my strong desire that we are able to solve some of the solvable disputes at least in the near future," she said replying to a question.

"For that in some area, we require flexibility and in other areas we just require to hold on or honour the commitments that we had made to each other. That will give a good message to our people," Khar said.

"I think it is important to recognise that Pakistan has more than one way walked the talk of approaching this from a different lens and we are somewhat satisfied that we have been able to achieve at least baby steps together and 'inshallah' more to come in the future," Khar said.

Observing that serious attempts had been made in the past to improve bilateral ties, Khar said both countries must make efforts so that the next generation does not have to carry the burden of the relationship.

"I think this is the point to emphasise that many people have done the same. So it is important that now people can see what we have been able to achieve between the two countries in the last 60 years and therefore not be bogged by following the same policy in the next 60 years.

Asked about her meeting with External Affairs Minister S M Krishna on the sidelines of a conference on Afghanistan in Tokyo last week, she termed it as "good" and said both countries must not lose any opportunity to move forward.

should be aware of the lost opportunity as we move forward. I know that (it was) the former Prime Minister Yousuf Raza Gilani's strong wish and desire to be able to receive a person who called him 'a man of peace' in his own homeland. Now we missed these opportunities and we hope that going forward that we will not miss such opportunities," she said.

Khar said President Asif Ali Zardari has shown an immense commitment to working with India. "His recent visit to New Delhi was a testimony to that. The new Prime Minister (Raja Pervez) Ashraf remains committed to this.

"I believe what we have been able to steer in Pakistan is a system-wide ownership of trying to make a difference of doing it differently," she said, adding "I am also proud of the fact. I will give full credit to the Foreign Office and others within the Pakistan system."

"That does not mean that we are not aware of the fact that that we have the issue of Jammu and Kashmir to be resolved but what we are convinced is that that the way to resolve the issue of Jammu and Kashmir, the way to resolve all other issues is through the the negotiating table. When we are convinced of that, the only thing we have to invest in is to build the trust," she said.

Khar also said that Pakistan was willing to go by the agreement that it had in the past with India to resolve issues like Sir Creek and Siachen.

"If you see there may be some disputes.....We have Sir Creek, we have Siachen... Pakistan has already made it clear that we are willing to go by the agreement that we had in the past," she said.

On Krishna appreciating her for her efforts in improving bilateral ties, Khar said both she and her Indian counterpart have been having a very good working relationship.

"Well I am very happy to say we do have a very good working relationship. I think we understand that both of us are well-intended and well-intended to the cause and the cause is to able to look at this from a regional lens and from the lens of a common future," she said.

The message was that the two sides need to move forward and build the relationship on trust and that "we need to ensure that we are able to achieve the results that we have not been able to achieve through hostility through this new ways of moving forward," she said.

Earlier Krishna, while replying to a question about his meeting with Khar in Tokyo, had complimented her for her efforts in improving the ties.

"Hina Rabbani Khar after assuming the onerous responsibility of guiding the foreign affairs of Pakistan has been extremely cooperative and as she assured me when she visited Delhi that she comes with a new mindset and that mindset has been an ongoing one," he had said. 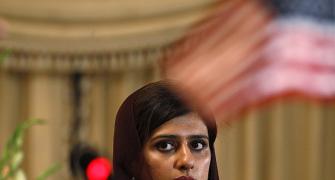 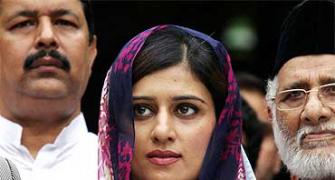 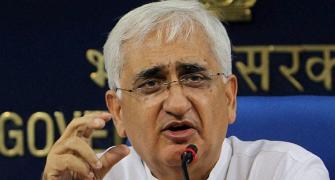 Khurshid's 'wake up call' should have been made to Sonia 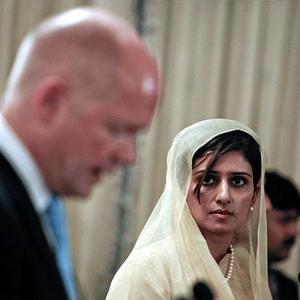 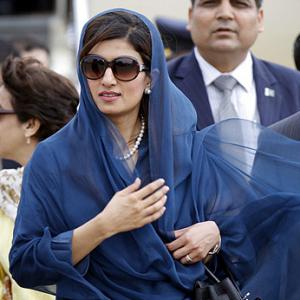