'We wanted to create a little India' 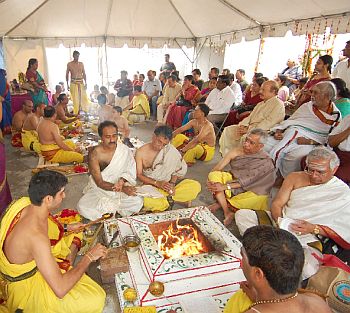 Thirty years ago, when the first formal Hindu prayers and services were performed in the Hindu Mandir in Minneapolis, Minnesota, there were just about 10 families. The framed pictures of Lord Mahadev, Lord Ram, Lord Krishna, Lord Ganesh, Goddess Saraswati and Goddess Laxmi adorned the main dais of the temple.

Like many early Hindu temples, which began appearing across America in mid-1970s, the Minneapolis temple had also replaced an abandoned church.

But now, in the middle of a cornfield on the outskirts of Maple Grove and close to the twin cities of St Paul and Minneapolis, a huge Hindu temple stands majestically. It has become a spiritual magnet for more than 30,000 Hindus in the state and the neighbouring five states, including North and South Dakota and a part of Wisconsin. Its unique features include 21 deities housed under one roof, and the main deity of Lord Vishnu in an unusual posture -- at least for North America.

About two weeks ago, when over 8,000 Hindus congregated for the consecration of the 65-foot rajagopuram (multi-layered archway) of the three-year-old temple, there were many who remembered the efforts over the last 30 years to build the all-new temple.

Mangala Pai, an agent for a major insurance company, joined the three-day event marking the completion of the mandir, remembering with tears in her eyes how she used to meet fellow Hindus for worship in homes over 25 years ago.

Then she worshipped in the small temple, and finally she has an opportunity to worship in the new temple. She felt even more at home in the new facility, Minnesota Hindu Temple, especially since it also had her ishta devata (favourite deity), Goddess Durga, and the deity of Lord Hanuman, the favourite of her 4-year-old grandson Ketav.

"He (Ketav) wants to know more and more about Hanuman," she said, chuckling. "Now, I am able to show him Hanuman as well as my favorite deity."

"I got goose bumps throughout the celebrations when I heard the bells and the chanting," she said. "Who would have thought of this beautiful mandir in the middle of nowhere? I got tears in my eyes and I was smiling deep inside me."

Like many other devotees young and old, she volunteered for many chores, including selling raffle tickets to help settle the temple's $6.3 million construction debt. The temple cost about $10 million.

Some devotees believe it is the largest temple in North America.

"I think what the devotees mean by that is the uniqueness of this temple," said Byron Byraiah, one of the earliest backers of the temple project. "We have 21 deities inside this beautiful hall and they represent the deities in major temples across India, including the ones in Puri (in Orissa), Kanchipuram (Tamil Nadu) and Badami (Karnataka). I don't think any temple (in the US) has so many deities."

He added: "Our goal was very clear. We wanted to create a little India in the American Midwest."

The temple builders did not design it with the goal of setting records. "We are glad to say that we are one of the largest temples on this continent," Byraiah said. "But what is most important is that right from the beginning we have been conscious of building a temple that serves as a unifier of our diverse communities."

Many devotees who have worshipped at temples in America and India said they would be very surprised if there is another temple that has so many deities under one roof.

The 43,000-square-foot temple was built not to be physically imposing, but to make it inclusive of as many beliefs as possible, said Mythili Chari, president and one of the most active members of the Hindu Temple Society.

Historically, temples in America and Canada were built at the initiation of a linguistic community or a regional group.

"But here we have actively sought to transcend such barriers," Chari said, adding, "It is like we are sending out the message, we will try to accommodate your ishta devata but please remember others have their own favourite deities too.

"It is not that we are without our egos," Chari, a banker, continued, "but we are conscious of the fact that we have to rise above the regionalism we have brought with us to America."

The younger devotees, especially those who grew up in America, respect such thinking, she added.

Muthiah Sthapathi, who has helped the design and construction of over a dozen important and large temples across North America, was a pillar of strength, temple officials said.

American architects designed the temple's exteriors and the outer design does not imitate any temple in India. There were many challenges, especially building a temple in the middle of a cornfield where there was no road near by, no electricity, no water supply and hardly any other facility.

"The sewer was 3 miles away," Byraiah said. "We had to bring in everything. The days of buying an old church, modifying it a bit and converting it into a temple were much behind us.

"The government officials initially told the temple builders," he continued, "that to get the permits could take over a decade. "We had to make urgent pleas, convince them that we have waited for a temple of this kind for more than three decades."

The main deity at the temple is modelled after Lord Vishnu's idol at the famous temple in Kanchipuram.

"It is a majestic deity," Byraiah said. "It is a standing Vishnu, and that itself makes it very different."

The statue, which is about 8 foot high, was deliberately made a little smaller than the original one at the 1,500-year-old Varadaraja Perumal Temple in Kanchipuram. This standing form of Vishnu is the first of its kind on the American Continent, the temple authorities said.

The deities are housed indoors, mainly because Minnesota is one of the coldest regions in North America. And some devotees believe the gods protected the temple from the severe economic climate. The recession did not affect the temple project much. Many of the donors had their wealth intact. But the temple could not sell 80 acres of the land it had to settle its debts.

Many Hindu temple projects in the US have run into zoning problems. In many cases, non-Hindus have objected to a temple project, saying that their neighbourhood would become noisy.

Some of the opposition could stem from anti-immigrant sentiments; some from bigotry, with fundamental Christians fearful of 'idol' worshippers, and some from genuine concern at a weekend population explosion.

There were no zoning problems with this temple. The devotees and temple management committee believe the temple does not have any insurmountable problems. But just two months before the temple became functional, vandals broke into the building, dismembered stone statues and made deep holes in walls and windows in the first quarter of 2006.

Two 19-year-olds pleaded guilty to damage worth about $250,000. The temple authorities requested the court to give them suspended sentence; the young men were ordered to do volunteer work at the temple. They said their act stemmed from 'foolishness.' They were forgiven in a ceremony at the temple.

Pai remembered all this and much more as she climbed the 101 steps to the top of the rajagopuram. But she was nothing but optimistic. "I am a grandmother, and the day I went climbing to the top, the winds were severe," she said.

"The wind was blowing at 35 miles, sometimes even 60 miles, speed. But you forget everything. You have the name of your ishta devata on your lips and keep climbing."