News
Business
Movies
Sports
Cricket
Get Ahead
Money Tips
Shopping
Sign in  |  Create a Rediffmail account
Rediff.com  » News » 'We hope she recovers from her trauma'

'She keeps asking me about the two women and child she saw before she was buried under the debris.'
Rediff.com's Prasanna D Zore meets a worried father whose daughter survived the building collapse in Mumbai which claimed 17 lives. IMAGE: Varsha Sakpal was working on the second floor when the building collapsed. She survived the mishap. Photograph: Sahil Salvi

When the Siddhi Sai Apartments began collapsing around 10.30 am on Tuesday, July 25, Varsha, who worked on the second floor of the Ghatkopar, north Mumbai, building as an accountant, saw two women with an infant rushing down the stairs from the third floor at the same time that she too was running for safety.

And then everything blacked out.

Varsha was fortunate to have been buried under the debris in such a manner that her hands and part of her face could be seen by passersby.

By the time she was pulled out of the rubble by two boys and a woman, she had already called her father and told him about the building collapse.

"When she called, I was down the hill," her father Pandurang Sakpal says outside Ward Number 14 at the Rajawadi Hospital where Varsha is recovering from a head injury.

The Sakpals live atop a hill in Ghatkopar's Ramnagar area and as soon as her father got a call he rushed to the collapse site and took Varsha to the hospital in an autorickshaw.

Though not much wounded physically, Varsha -- a commerce graduate from the K J Somaiya College of Arts and Commerce -- is unable to sleep properly, her father says.

"She keeps asking me about the two women and child she saw before she was buried under the debris," he adds.

On the doctors' advice the Sakpals have not informed their daughter about the deaths of the three lest it adds to her trauma.

"She is okay," her worried father says, "but we hope she recovers from her trauma soon and gets some sleep." A requiem for Mumbai's native trees 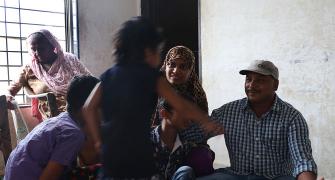 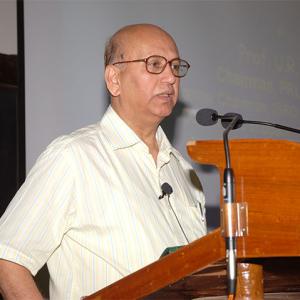