News
Business
Movies
Sports
Cricket
Get Ahead
Money Tips
Shopping
Sign in  |  Create a Rediffmail account
Rediff.com  » News » 'We came to US to become Americans not Indian-Americans' 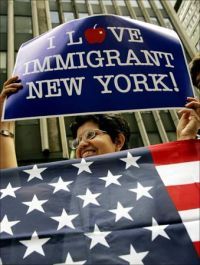 Asserting that he didn't believe in hyphenated identities, Louisiana Governor Bobby Jindal has said that his parents came to the US from India four decades ago to become Americans and not Indian-Americans.

He invoked his ethnic heritage to make a call for immigrant assimilation and called people who talked about skin pigmentation as the "most dim-witted lot" around.

"My parents came in search of the American Dream, and they caught it. To them, America was not so much a place, it was an idea. My dad and mom told my brother and me that we came to America to be Americans. Not Indian-Americans, simply Americans," Jindal said in a prepared remarks that he is scheduled to deliver next week.

Jindal, the first Indian-American Governor of any American state, is scheduled to address the Henry Jackson Society on Monday in London.

Releasing the prepared remarks of Jindal's speech, his office said the Louisiana Governor will call for immigrant assimilation to strengthen countries and protect freedom.

"If we wanted to be Indians, we would have stayed in India. It's not that they are embarrassed to be from India, they love India. But they came to America because they were looking for greater opportunity and freedom," Jindal said, explaining the reason why he does not like to be called or described as an Indian-American.

"I do not believe in hyphenated Americans. This view gets me into some trouble with the media back home. They like to refer to Indian-Americans, Irish-Americans, African-Americans, Italian-Americans, Mexican-Americans, and all the rest. To be clear -- I am not suggesting for one second that people should be shy or embarrassed about their ethnic heritage," he said.

Jindal said his objective in this speech is to speak clearly about what he believes to be America's proper role in international affairs; to speak bluntly about the nature of the threats being faced and the recent tragic events in France; and to suggest what he thinks is the way forward.

"The first step for America, and for any nation that wants to protect its own freedom and encourage it everywhere is to have a strong economy. When the United States became a major economic power at the end of the 19th century, it had the means to become a major military power and to become a leader in the free world," Jindal said.

The Governor said the first tenet of American foreign policy must always be freedom, and the relentless pursuit of freedom for our people, and for all people, regardless of race, creed, religion, ethnicity, or any other artificial divisions, which humans use to divide one from another.

"America must always be a beacon of freedom throughout the world. I'm not naïve enough to suggest that the entire world will ever be free, but I'm also completely opposed to ever giving up on the notion that all people everywhere in the world deserve and desire to be free," he said.

"The next principle is of course security. America must and will pay any price to defend itself and to defend its allies. No two countries are the same, but those countries that value freedom and democracy and civility and decency must band together, and must defend each other," he said.

"Those countries that desire security and harbour no ill-will toward their neighbours must stick together in an increasingly dangerous world. The third principle that is crucial is truth. We must speak the truth, to each other, and to our own countrymen," he said.

"When a country or a movement is behaving badly on the international stage, we must not pretend otherwise. You cannot remedy a problem if you will not name it and define it. One of the most prominent examples in our day is ISIS and all forms of radical Islam. These people have no legitimate claim, they have no justification for their cowardly, barbaric, and inhuman behaviour, and we must not pretend otherwise," Jindal said.