News
Business
Movies
Sports
Cricket
Get Ahead
Money Tips
Shopping
Sign in  |  Create a Rediffmail account
Rediff.com  » News » 'We are with every initiative that raises awareness about caste violence' This is the text of the statement put out by the People’s Media Advocacy and Resource Centre on IIT Madras’s derecognition of the Ambedkar-Periyar Study Circle.

We condemn the decision taken by the Indian Institute of Technology Madras (IIT Madras), on May 22, to ‘derecognise’ the Ambedkar-Periyar Study Circle (APSC), an independent student body of the institution.

The ministry of human resource development in New Delhi claims to have received an anonymous complaint about ‘the distribution of controversial posters and pamphlets’ by APSC in the IIT Madras campus. The nature of this allegedly controversial material was simply anti-Modi views. This got the government's hackles up, as it is determined to silence all critical voices, especially voices from outside the spectrum of parliamentary parties, Following this, the HRD ministry wrote to IIT Madras and asked the institution to respond about the above matter. The Dean of Students of IIT Madras decided to derecognise the student group even before APSC got a chance to explain their end of the story.

The APSC was created in April 2014 to foster conversation and raise awareness about Ambedkar-Periyar and rampant caste violence in the country. In June 2014, the Dean of Students, Dr M S Sivakumar, directed APSC to change the name of the group; because according to him ‘Ambedkar Periyar’ are politically motivated names, and student organisations should be apolitical and should not have names of individuals.

No such decree for right-wing organisations operating under the name of ‘Vivekananda Study Circle’. Consider this one gem of an example from the Vivekananda Study Circle website: The title of the page is ‘Is Kali Black?’ and has the following quote claimed by them to be from The Gospel of Ramakrishna: ‘Is Kali, my Divine Mother, of a black complexion? She appears black because She is viewed from a distance; but when intimately known She is no longer so. The sky appears blue at a distance; but look at it close by and you will find that it has no colour. The water of the ocean looks blue at a distance, but when you go near and take it in your hand, you find that it is colourless.’ (From http://www.vsc.iitm.ac.in/Home/?p=2969)

India is a society replete with caste violence. Some estimates claim that each week: 13 Dalits are murdered; five Dalit homes are burned down; six Dalit people are kidnapped or abducted; 21 Dalit women are raped. It is not a coincidence that a majority of manual scavengers are from the downtrodden classes. There are systemic and structural issues in Indian society why such violence happens on a regular basis and are under-reported in the mainstream media. It is important that such issues are talked about more, and we stand in solidarity with every initiative that raises awareness about caste violence, Ambedkar and Periyar.

The egregious politics of skin colour, as the example cited above suggests, and violence towards the downtrodden caste is prevalent in Indian society. We cannot eradicate caste distinction by not talking about it, by avoiding to name organisations after Ambedkar-Periyar -- it is exactly the opposite -- we need to confront caste politics head on as a nation, admit the historical injustices meted out to Dalits, Adivasis and other lower castes, and admit that a lot of it are ongoing.

We understand that this current action by the HRD ministry to pressurise IIT Madras, and the subsequent actions taken by the Dean of Students to be a continuation of the brahminisation project of the Hindutva forces in the Indian polity, whose most recent manifestations have been in the spate of ghar-wapsi, church violence and increase in incidents of communal violence across the country. We decry all such efforts by the Hindutva forces, the direct involvement of the government in arm-twisting anti-brahminical endeavours and condemn IIT Madras, the premier institution that it is, for the shameful decision to intimidate and muzzle conversation on caste.

We also condemn the failure of the so-called liberal oppositions. It is significant that only after two days of hue and cry in the social media did the liberal mainstream media report on the issue. For mainstream politics, there are certain shared premises. While the alleged upholders of political liberalism and secularism condemn actions of the Sanghis, they do not desire to challenge the upper caste dominations. We call upon all Marxist and socialist forces to recognise that without a serious attack on the oppression of the lower castes, the unity of the toilers cannot be achieved, and therefore, fighting for the rights of Dalits is a vital part of any genuine Marxist politics in India.

Image: DYFI activists clash with the police in Chennai during a protest against IIT Madras's decision to derecognise the Ambedkar-Periyar Study Circle. Photograph: PTI Photo. 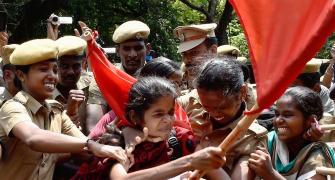 Protesters detained as they clash with police at IIT-Madras 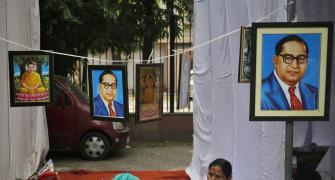 IIT-M in controversy over 'derecognition' of students' body