We are natural partners with similar values, Modi tells Harris

Prime Minister Narendra Modi on Thursday described India and America as "natural partners" as he held the first in-person meeting with Vice President Kamala Harris at the White House during which they decided to further cement the Indo-US strategic partnership and discussed global issues of common interest, including threats to democracy and the Indo-Pacific. 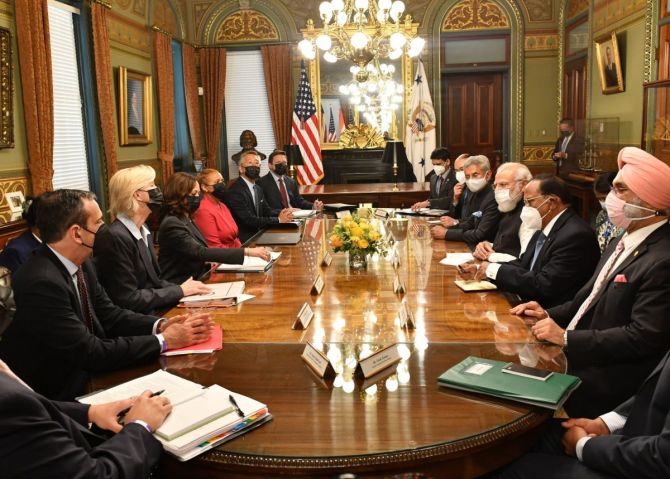 "India and America are natural partners. We have similar values, similar geopolitical interests," Modi said in a joint media appearance with Harris, the first-ever person of Indian origin to be elected as the vice-president of the United States.

Noting that India and the US are the largest and oldest democracies, Modi said the two countries share values and their coordination and cooperation is also gradually increasing.

This is the first meeting between the two leaders. Harris had earlier spoken with Modi over the phone in June during the Covid-19 crisis in India.

"You are the source of inspiration for so many people across the world. I am completely confident that our bilateral relationship will touch new heights under President Biden and your leadership," Modi told Harris.

The two leaders were wearing masks as they both spoke in front of a battery of pool reporters from both India and the US.

He invited the 56-year-old Democratic leader to visit India.

"Both President Biden and you assumed office at a time when our planet faced very tough challenges. In a short time you have had many achievements to your credit be it Covid-19, climate change or the Quad," Modi said.

"As relates to the Indo-Pacific, the US stresses on maintaining a free and open Indo-Pacific,” Harris said, amidst China's aggressive moves in the strategically vital region. 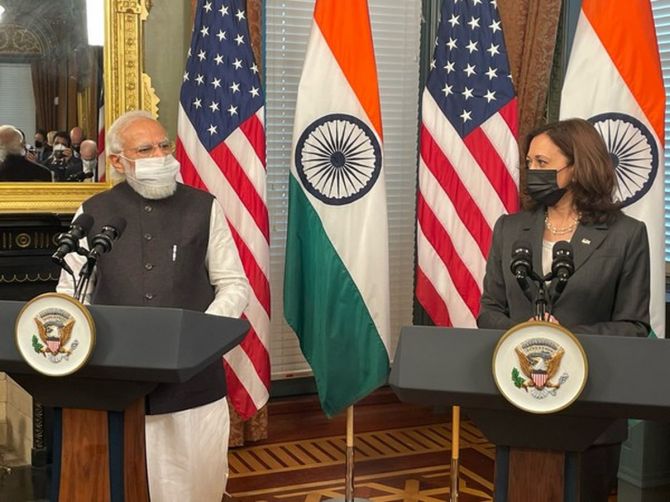 She said the world is more interconnected and more interdependent than ever before. ”And the challenges that we face today have highlighted that fact. Covid-19, climate crisis and the importance of our shared belief in the Indo-Pacific region,” she said.

Modi noted that he had the opportunity to speak to Harris after she  assumed the Vice Presidency. "One of our interactions happened when India was battling a very tough wave of Covid-19 infections. I recall your kind words of solidarity that time," Modi said.

India was confronted with the second wave of the Covid-19 pandemic. A very difficult time for India, he said. “Like a family, the sense of kinship and so warmly, you extended a helping hand, the words that you chose when you spoke to me, I will always remember that, and I'd like to thank you from the bottom of my heart,” the prime minister said.

”Like a true friend, you had given a message of cooperation, and were very full of sensitivity and immediately after that we found that the US government, the US corporate sector and the Indian community, all came together to help India,” he said.

Modi said that the US Government, companies based in the USA and the Indian diaspora were very helpful when India was fighting a tough wave of Covid-19 infections.

He said that four million people of Indian origin are acting as a bridge of friendship between the two countries.

Harris described India as a "very important partner" to the US and welcomed New Delhi's announcement that it will soon resume vaccine export.

India stopped the export of Covid-19 vaccines after the second wave of the pandemic hit the country in April this year.

On Monday, India said that it will resume export of surplus Covid-19 vaccines in the fourth quarter of 2021 under the ''Vaccine Maitri'' programme and to meet its commitment to the COVAX global pool.

On the issue of the climate crisis, she told Modi that the US working together with India can have not only a profound impact on people of nations but around the world itself.

Harris said that it is incumbent on the two nations to protect democracies in the best interests of people of the two countries.

"As democracies around the world are under threat, it is imperative that we defend democratic principles and institutions within our respective countries and around the world. And that we maintain what we must do to strengthen democracies at home and it is incumbent on our nations to of course protect democracies in the best interests of people of our countries,” she said.

Their meeting comes a day ahead of the maiden bilateral meeting between Modi and President Joe Biden and the Quad Leaders' Summit at the White House on Friday.

Since taking office, Harris has met with or spoken to over 30 world leaders, promoting US interests on issues ranging from global health to climate change to cyber threats. 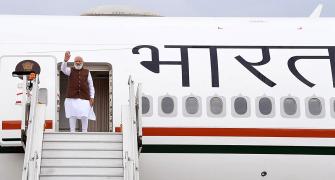 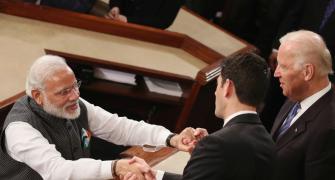 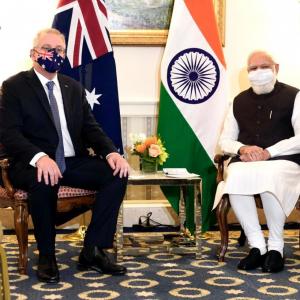 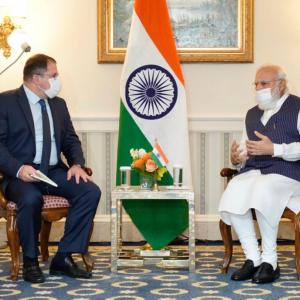