Was the Delhi attack a bid to claim several lives?

Even as senior Delhi police officials maintained that the firing and the consequent pressure cooker blast near Jama Masjid on September 19 could be the handiwork of 'disgruntled youth,' the National Investigating Agency has been asked to conduct investigations into the case.

The NIA is the country's premier investigating agency for terror-related crimes.

On Sunday morning, two Taiwanese tourists sustained bullet injuries after unidentified bikers arrived near the historic Jama Masjid and opened several rounds of fire at their tourist bus. While one of them is still recuperating at a city hospital, the other has been discharged after treatment.

Over two hours later, a blue Maruti car went up in flames after a pressure cooker bomb exploded near the mosque.

The Delhi police has been maintaining that the bomb in the pressure cooker was crudely assembled and poorly circuited and did not intend to inflict heavy casualties. The FIR registered at Jama Masjid police station, however, states that the explosives had been placed in the car to claim lives.

"It appears that someone, with an intention to claim lives of local public and damage property, had deliberately placed the explosives in the car," the FIR (number 66/2010) reads.

The FIR has invoked the Explosives Substances Act and specifically states that improvised explosive device was used to trigger the blast in the car. The police, who had taken samples from inside the car to investigate, found traces of ammonium nitrate.

The bomb, which was placed in a plastic box inside the pressure cooker, consisted of two timers in a circuit. However, there was no RDX or detonators.

A senior investigating police official said, "There are several possibilities when we consider all aspects of the case. The timing of the bomb (it went off at 2 pm, according to the FIR) implies that planning was immaculate. The Maruti car, which went up in flames, was in front of a huge transformer. The scene of crime near gate number 3 of the mosque was cordoned off and the public and media vehicles were pushed to the place where the car was. We are investigating the possibility that all this was deliberate to claim the lives of several people."

The officer added that the flame, if went undetected, could have set the transformer on fire, causing another blast.

The Indian Mujahideen had purportedly sent a mail to media houses after the incidents, claiming responsibility. The mail hinted that they wanted to avenge the deaths of two alleged IM terrorists killed in a police encounter two years ago in Batla House on September 19.

According to the FIR, the Taiwanese group had arrived in the capital on Saturday and had been staying in a hotel in SDA Market, Hauz Khas.

Concerned about security arrangements in the capital, Commonwealth Games Organising Committee chairman Suresh Kalmadi also had a meeting with the Delhi police chief YS Dadwal and other senior officers. It is learnt that Kalmadi was assured that the attack was not Games-related and adequate security measures have been put in place for the event.

Britain and Australia have already issued travel alerts about possible terror attacks to their citizens travelling to India.

In another development, the Delhi police have announced a cash reward of Rs 25,000 to a cycle rickshaw puller, who attempted to chase the armed bike borne assailants. Saleem Ahmed, the rickshaw puller, had run behind the assailant with a beat policeman and hurled stones at them. The stone throwing resulted in the accused dropping down a gun magazine, which contained live cartridges. 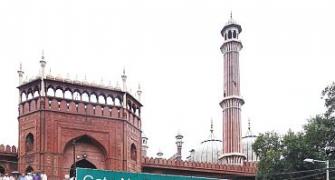 Which terror group carried out the Jama Masjid attack?

'Delhi blast must be a handiwork of local gang'